'I used to be a scholar... Now I'm working with refugees' 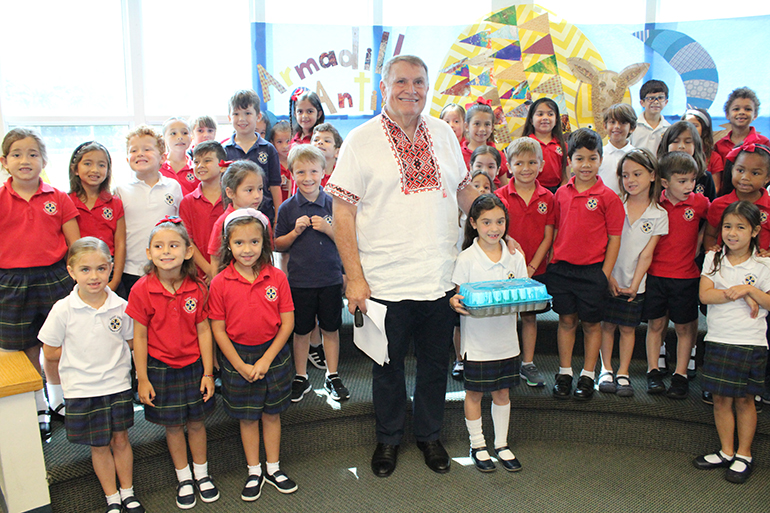 Children's author Michael Sampson poses with students from St. Louis Covenant School in Pinecrest on April 29, 2022, after presenting his book "Armadillo Antics." Sampson also visited middle school students at the school and discussed his work as a Fulbright Scholar in Ukraine, which turned into humanitarian work with refugees fleeing the country.

PINECREST | Author and educator Michael Sampson visited St. Louis Covenant School twice in 2022: the first time at the end of April, the second in early December.

An award-winning children’s book author and professor at St. John’s University in New York, Sampson just published his latest work, “The Story of Ukraine,” a tale precipitated by current events as much as his experiences in that country as a Fulbright Scholar — a location he chose because his wife is Ukrainian. 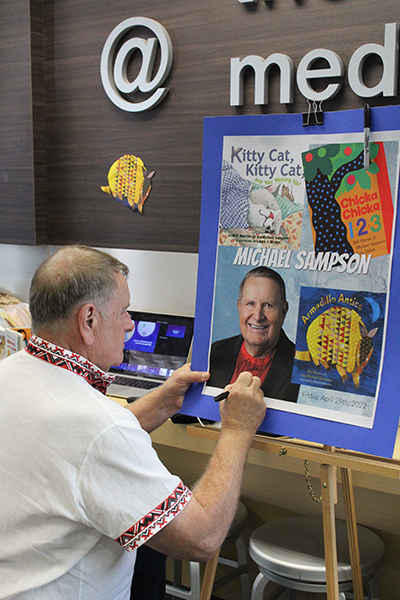 Children's author Michael Sampson signs a promotional poster of his visit to St. Louis Covenant School in Pinecrest on April 29, 2022, after presenting his book "Armadillo Antics." Sampson also visited middle school students at the school and discussed his work as a Fulbright Scholar in Ukraine, which turned into humanitarian work with refugees fleeing the country.

Sampson’s Fulbright Scholarship was supposed to run from 2020 to 2021. Then the COVID-19 pandemic put the world on hold. He finally made it to Ukraine in the fall of 2021. And then the war came. In January 2022, about a month before Russia's Feb. 24 invasion, the U.S. Department of State requested that Sampson and other Fulbright Scholars evacuate to Warsaw, Poland.

“We didn’t believe it,” said Sampson. “The Ukrainian people didn’t believe it because the Russian soldiers had been on the border fighting them, invading them in the Donbas and Crimea since 2014. My family and I had to leave Ukraine because they were afraid there was going to be a war.”

His wife and daughter returned to the U.S., while he remained in Warsaw.

Instead of doing his original Fulbright work — using the rhymes, rhythms, and repetitions found in children’s books to teach Ukrainian children English — Sampson and the other Fulbright Scholars in Ukraine found themselves helping with humanitarian efforts.

During the early months of the war, Sampson helped at least 20 families cross the Ukrainian border. On two occasions, he personally drove four hours to the border and back to help individuals flee — some of the 30 teachers in eight schools he was working with — and later helped them resettle in other countries. 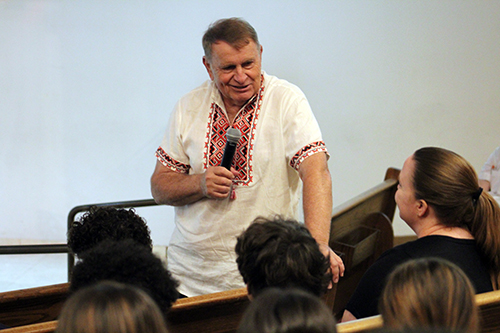 Children's author Michael Sampson answers questions from middle school students at St. Louis Covenant School on April 29, 2022 about his work as a Fulbright Scholar in Ukraine, which turned into humanitarian work with refugees fleeing from the country.

A November 2022 report from the United Nations High Commissioner for Refugees said the Russian invasion had driven 14 million Ukrainians from their homes.

“I used to be a scholar,” Sampson told the Florida Catholic then. “Now, I’m working with refugees. My calling, that I didn’t know that I would receive from God, was to help people who are in a crisis.”

That calling reminded him of the mission of St. Vincent de Paul. As a professor at St. John’s, the largest Catholic university in the U.S., “our mission is the ministry of St. Vincent de Paul, to help the poor and underprivileged. Little did I know I would be practicing this mission in another way, with another set of homeless people. But homeless people because of war, not because of poverty.”

During his brief time in Ukraine, he grew enamored of the country, its food, culture, and language.

“But most of all I think I liked the children in the schools because they were such a breath of fresh air. They were so wanting to learn about America and what it was like to live in America,” said Sampson. 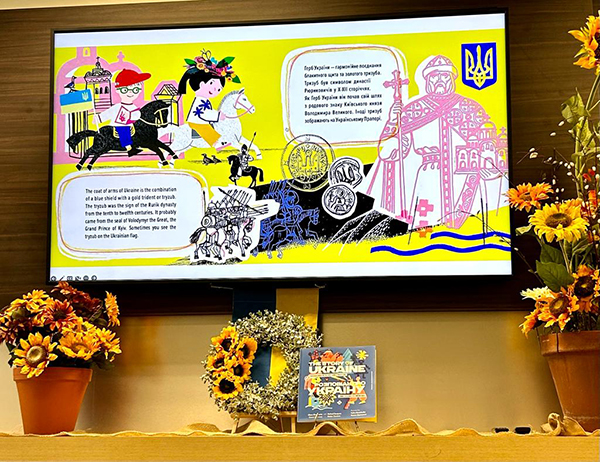 The illustrations in Michael Sampson's "The Story of Ukraine" depict the history of Ukraine, its coat of arms, and more. Sampson, along with his wife and coauthor Olena Kharchenko, visited St. Louis Covenant School in December 2022 to share the book with students.

While rallying in Warsaw for peace in Ukraine, he heard “a beautiful song in Ukrainian.” Unbeknownst to him, it was the country's national anthem. Based on a poem by Pavlo Chubynsky that was later set to music, the original version was sung during the Ukrainian War of Independence from 1917-1921.

“The Soviet Union banned the song, and for years it had to be sung softly and secretly,” Sampson explained. “When Ukraine got its independence back in 1991, it was sung louder than ever.”

The lyrics read, in part: “The glory and the freedom of Ukraine has not yet perished. Luck will still smile on us, brother Ukrainians”; and “we’ll live happily in our land.”

Sampson knew that it needed to be written down and translated so that it could be heard around the world during this trying time. In addition to the anthem, Sampson’s “The Story of Ukraine: An Anthem of Glory and Freedom,” touches upon the country's culture, flag, geography, heritage, history, and more. Written in English and Ukrainian, the book is coauthored by Sampson and his wife, Olena Kharchenko, and illustrated by Ukrainian artist Polina Doroshenko. 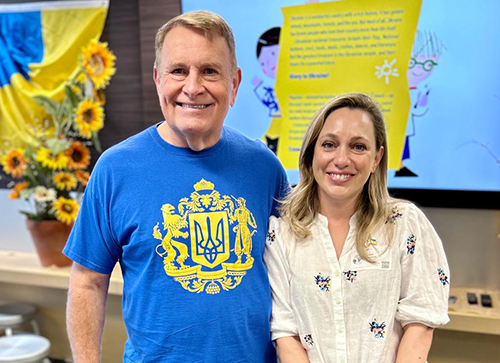 Michael Sampson visited St. Louis Covenant School in Pinecrest for the second time in December 2022, this time with his wife, Olena Kharchenko. The two authored “The Story of Ukraine,” a children's book highlighting the country's history, customs, and more.

“But the best thing about Ukraine is the people,” he wrote. “More than 40 million warm-hearted, friendly, and talented citizens who love their country and would defend it at any cost.”

Throughout 2022, Sampson used his talents as a writer to contribute op-ed pieces which were picked up by The Chicago Tribune, New York Daily News, and the Tampa Bay Times, among others.

“I’m trying to help the American people understand so we can support. And America has been very supportive of Ukraine,” he said.

A native Texan who taught kindergarten through sixth grade, Sampson earned a master's degree in elementary education and a doctorate in reading education before moving on to teach at institutions of higher learning. He previously taught at the St. Petersburg campus of the University of South Florida.

His collaboration with fellow educator and children's author Bill Martin, Jr., has led to 30 bestselling and award-winning children’s books, including “Chicka Chicka 1, 2, 3,” “The Bill Martin Jr Big Book of Poetry,” “Ten Little Squirrels” and “Armadillo Antics.” Although Martin died in 2004, Sampson continues to publish previously unpublished titles written by the two of them, as well as his own books. 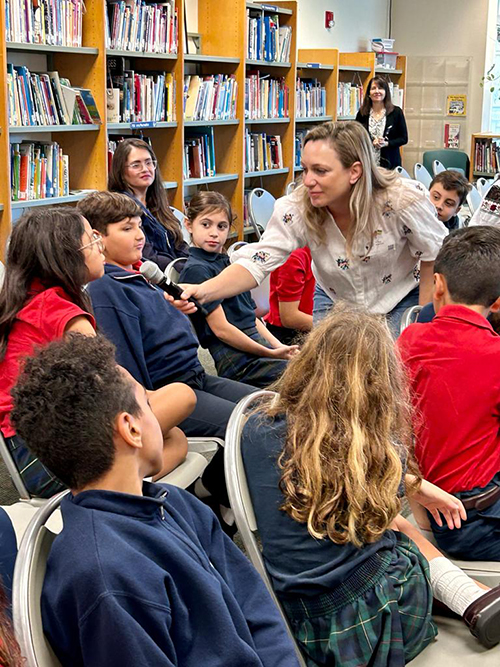 His April 2022 visit to St. Louis Covenant School coincided with his return from Europe to promote “Armadillo Antics,” which chronicles the nighttime adventures of a mischievous armadillo. He presented the illustrated rhyming book to kindergarten and first graders, then spoke with middle school students about his experiences in Ukraine.

He asked the students to put themselves in the shoes of Ukrainians, “a people being invaded, shot, and killed in the streets Ã¢â¬Â¦They’re just like you and me. They’re not different. They’re peace-loving, independent, God-fearing people.”

During his December visit, Sampson was accompanied by his wife. They read from “The Story of Ukraine” and he also spoke about the creative writing process.

For their part, the St. Louis School Crusaders presented Sampson with a donation of over $6,000 toward his work with Ukrainian refugees. The school also arranged to send 3,000 meals to soldiers and civilians “so they can have a good meal when they’re on the battlefield,” said Sampson.

“Only God knows how many people we help,” Sampson said. “But we have to feel that the people are in his hands and his care. But he will use us as his vessels to help.”