Abuse of the elderly: another pandemic

June is National Elder Abuse Month: How Catholics and faith congregations can help 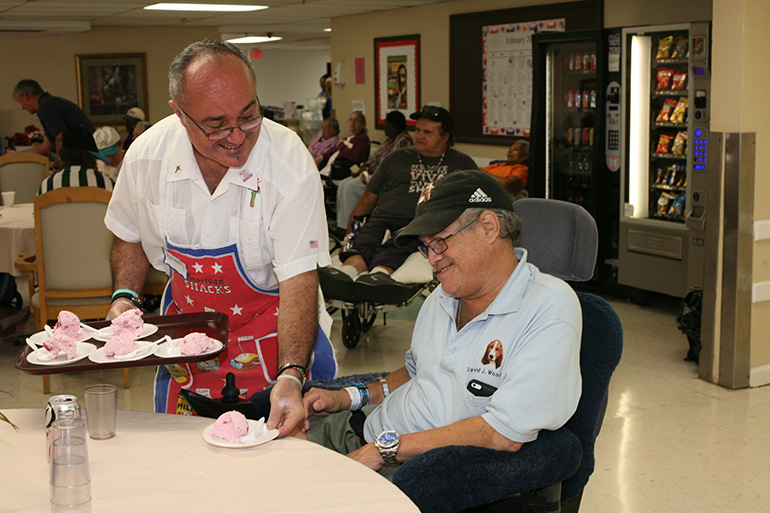 In this file photo from 2014, Vinnie Pisciotta serves ice cream to Watercrest resident David Woodruff during a visit by the Emmaus Brothers of St. Rose of Lima Parish to the nursing home. The National Center on Elder Abuse reports that seniors are actively involved in or contacted regularly by religious congregations more than any other demographic group. In addition, clergy, and representatives from one’s faith community are among the few, and in many cases, the only people who visit a senior’s home or care facility.

June is National Elder Abuse and Awareness Month, a month that calls for a heightened awareness of what has become “another” global pandemic. The month also spotlights risk factors and relevant information concerning vulnerability, aimed at mitigating abuse of seniors and ameliorating this vexing challenge. 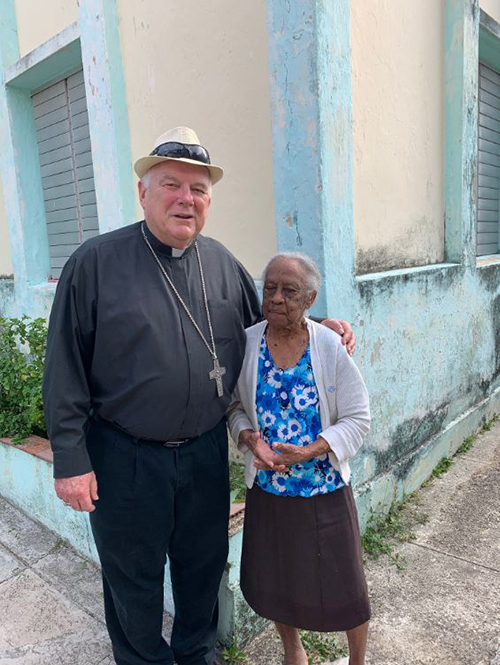 Archbishop Thomas Wenski greets a 103-year-old woman during a visit to a nursing home run by the Catholic Church next to the church of San Francisco de Paula in La Víbora, a neighborhood on the outskirts of Havana, May 27, 2019.

According to the National Center for Elder Abuse (2021), elder abuse and neglect, including financial/material exploitation, affects an estimated 10% of the population of seniors in the United States. (ncea.acl.gov/). From an awareness perspective, knowledge of elder abuse (which affects one in five adults) lags actual cases. The public is still only seeing the “tip of the iceberg.” Many in the field surmise that awareness of elder abuse is similar to the awareness levels for child and domestic abuses 30 years ago. Heightened awareness and actionable steps to improve the overall well-being and protection of seniors are first steps where faith congregations can play an important part.

Physical abuse is defined as the use of physical force that may result in bodily injury, physical pain, or impairment. Physical abuse may include but is not limited to such acts of violence as striking (with or without an object), hitting, beating, pushing, shoving, shaking, slapping, kicking, pinching, and burning. In addition, inappropriate use of drugs and physical restraints, force-feeding, and physical punishment of any kind also are examples of physical abuse.

Sexual abuse is defined as non-consensual sexual contact of any kind with an elderly person. Sexual contact with any person incapable of giving consent is also considered sexual abuse. It includes, but is not limited to, unwanted touching, all types of sexual assault or battery, such as rape, sodomy, coerced nudity, and sexually explicit photographing.

Neglect is defined as the refusal or failure to fulfill any part of a person's obligations or duties to an elder. Neglect may also include failure of a person who has fiduciary responsibilities to provide care for an elder (e.g., pay for necessary home care services) or the failure on the part of an in-home service provider to provide necessary care.

Abandonment is defined as the desertion of an elderly person by an individual who has assumed responsibility for providing care for an elder, or by a person with physical custody of an elder. 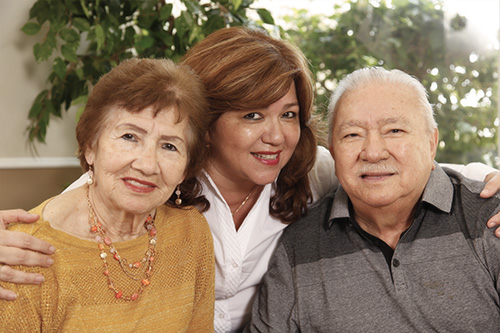 In this file photo from 2019, Jackie Pareja, Social Service Coordinator at St. Boniface Gardens, poses with her parents who are residents of the facility. Catholic Housing Management, a division of Catholic Health Services, currently operates 16 HUD subsidized apartment complexes for active, independent seniors with limited financial resources in Miami-Dade and Broward counties.

Self-neglect is characterized as the behavior of an elderly person that threatens his/her own health or safety. Self-neglect generally manifests itself in an older person as a refusal or failure to provide himself/herself with adequate food, water, clothing, shelter, personal hygiene, medication (when indicated), and safety precautions.

The definition of self-neglect excludes a situation in which a mentally competent older person, who understands the consequences of his/her decisions, makes a conscious and voluntary decision to engage in acts that threaten his/her health or safety as a matter of personal choice.

IMPORTANCE OF FAITH AND SUPPORTIVE COMMUNITIES

An indisputable value embraced by many seniors is the importance of faith in their lives. Because this value is woven into the fabric of these important members of our population, the strong connection among faith, health, public policy, and the criminal justice systems is necessary to help combat elder abuse and neglect — often considered to have risen to the level of a pandemic given its domestic and global presence. Our Catholic faith calls us to witness to the Gospel values for which we have both a moral and legal fulfillment responsibility. Vigilance and protection of "widows and orphans" as well as avoidance of “forsaking those in the time of their old age” are biblical commands often preached during homilies. 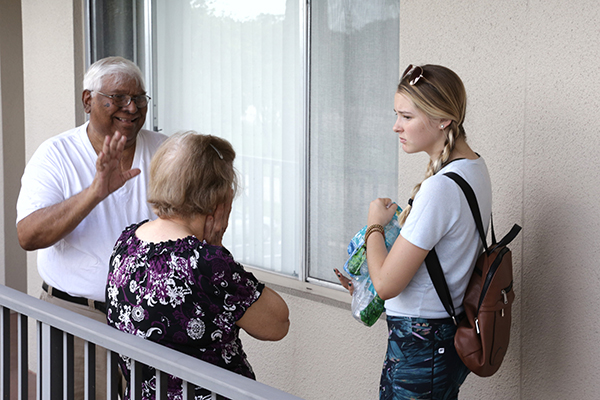 Volunteers from St. Edward Parish in Pembroke Pines prepared hot meals and checked in on senior citizen residents of the expansive Century Village housing development in Pembroke Pines after Hurricane Irma hit in September 2017. It's an example of how clergy and members of faith communities can be protective conduits of the well-being and safety of older congregants.

Clergy and members of faith communities can play pivotal roles in awareness, oversight, and intervention of abuse suspicions. They can be protective conduits of well-being and safety of older congregants. The National Center on Elder Abuse (2021) reports that seniors are actively involved in or contacted regularly by religious congregations more than any other demographic group. In addition, clergy, and representatives from one’s faith community are among the few, and in many cases, the only people who visit a senior’s home or care facility.

Acts of kindness and witness to one of the important Gospel values is vigilance — looking out for others. Many caring diocesan leaders, boards of directors, and front-line staff at religious-sponsored independent senior living, post-acute care, and long-term care facilities have been attentive protectors and caregivers. Biblically speaking, Jesus challenged his apostles to watch out for dangerous predators in the Garden of Gethsemane. As dutiful members of faith organizations, those in faith communities and in healthcare/related fields can become sentinels. These duties include an intentionality and a responsibility to watch out for the best interests of vulnerable older adults.

WHAT TO DO IF YOU SUSPECT ABUSE?

In Florida, as in most states in the United States, clergy are among professionals mandated to report suspected abuses — “when any person has knowledge or reasonable cause to suspect that a vulnerable adult has been or is being abused, neglected, or exploited. (Florida Adult Protective Services Act).

The Archdiocese of Miami’s Safe Environment program encompasses abuse prevention for the elderly and other vulnerable adults. Two in-depth bulletins on the subject are linked here and here.

Dr. John "Jack" Rudnick Jr. is a visiting professor at St. Thomas University's College of Business. He is a Licensed Nursing Home Administrator and Fellow in the American College of Healthcare Executives and has research interests in healthcare quality improvement, strategic and innovative planning, and international adoption advocacy.