Stations of the Cross from the Holy Land

Station 1: Jesus is condemned to death.

Station 2: Jesus takes up his cross.

Station 8: Jesus speaks to the women of Jerusalem.

Station 10: Jesus is stripped of his clothes.

Station 13: Jesus' body is taken down from the cross. 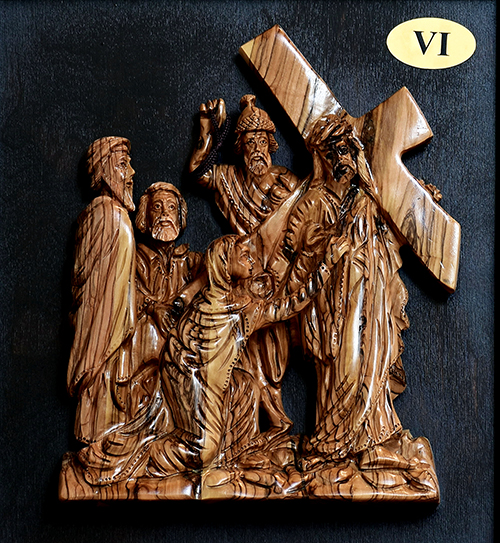 Station 6: Veronica wipes the face of Jesus. A dark streak of wood runs through his face, making it look bruised and bloody.

HOLLYWOOD | Among the items in the new chapel at Nativity Church, some hold special memories for its pastor: Stations of the Cross from the Holy Land.

Father David Zirilli bought the wooden stations at a shop next to the Church of the Nativity in Bethlehem, where Christ was born.

"It was a happy coincidence — buying them next to the original Nativity Church," said Father Zirilli, pastor at the Hollywood church, who toured the Holy Land in February.

Stations of the Cross — also known as Way of the Cross — is a devotion, typically prayed during Lent, that recounts the 14 traditional events Jesus endured on Good Friday. They begin with his condemnation to death, proceed with his walk to Calvary, and end with his entombment. Often a priest leads a group from station to station, offering a short message and adding a prayer. But the leader could also be a layman, or the Way of the Cross could be prayed by a lone individual.

The images may be made from wood, stone, ceramic, bronze or other materials. The set in the Nativity chapel was carved from olivewood, valued for its sharp, high-contrast grain.

The olivewood is especially effective at the Sixth Station, when Veronica wipes the face of Jesus: A dark streak of wood runs through his face, making it look bruised and bloody. 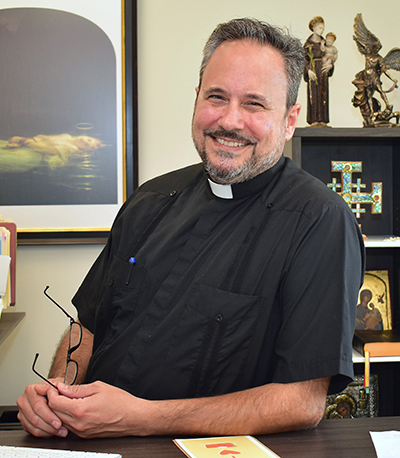 Father David Zirilli said he liked the idea of buying Stations of the Cross next to the original Church of the Nativity in Bethlehem.

Bethlehem was just one stop in the tour Father Zirilli took. It also included Jericho and northern Galilee, as well as Jerusalem. He visited the mounts of the Beatitudes and the Transfiguration. And he celebrated Mass at the Church of the Holy Sepulchre.

The trip itself was another happy coincidence: Father Michael Davis of St. Gregory Church, Plantation, told him someone had dropped out of his planned tour. Would he like to take that spot?

"I leapt at the chance," Father Zirilli said. "The Holy Land has been on my spiritual bucket list for years."

Finding Stations of the Cross for Nativity was another item on his list, ever since a parishioner had offered to buy them for the new chapel. The priest pored over catalogs and visited stores during trips to Spain and Portugal. Nothing seemed the right fit.

Until he saw the Stations in Bethlehem, he said. "Right away, I said, 'That's it!' "

He also liked the idea of buying the Stations at a shop owned by a conglomerate of several Christian families. Bethlehem may have been the birthplace of Jesus, but Christians now make up less than 12% of the residents.

"Christians there face more struggle than we do, yet they remain faithful," Father Zirilli said. "So I was glad to support them."

He admired the care they took in sending the items to the church. They arrived in a crate, three by four by four feet, with the individual items in their own boxes and bubble wrap.

And yes, he added, the unidentified donor approved of the purchase. "He was glad to donate items of artistic beauty and devotion." 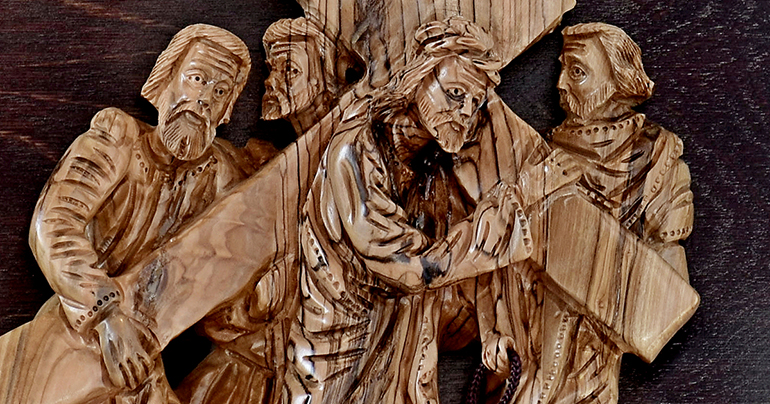 Other News from Nativity Church

Wednesday, 9 Dec 2020
Honoring those who give

Sunday, 22 Nov 2020
You have made a community where Christ is King