'He has made so many disciples on two continents'

Special to the Florida Catholic

MIAMI | Father Juan M. Lopez, pastor of Sts. Peter and Paul since 1988, celebrated 60 years in the priesthood June 24, 2022, surrounded by the parishioners he has led for the past 42 years. 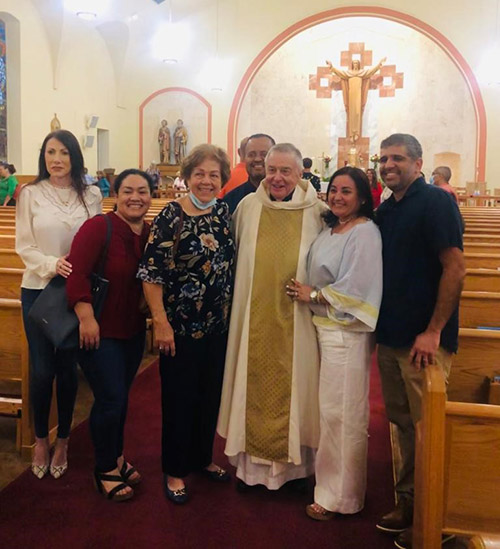 Father Juan Lopez poses with some of his parishioners after celebrating 60 years of priesthood at the parish where he has served for 42 of those years, Sts. Peter and Paul in Miami. The celebration took place June 24, 2022. 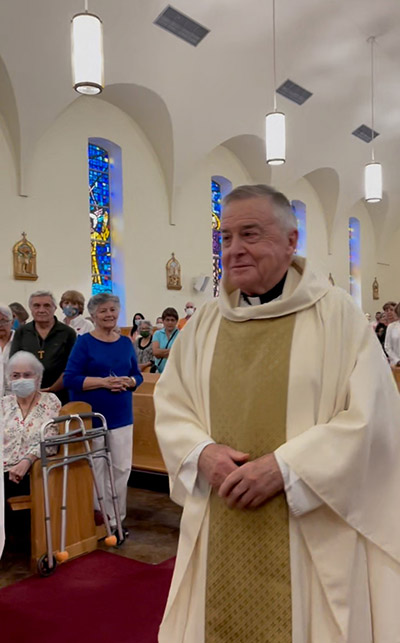 Father Juan Lopez exits Sts. Peter and Paul Church, where he has served as pastor for the past 42 years, after the Mass where he marked 60 years of priesthood, June 24, 2022.

Father López was born in Medina de Pomar, Burgos, Spain. He studied at the Seminario Metropolitano in Burgos for 10 years and at the Colegio Teológico Hispano Americano for two more before being ordained June 24, 1962, for the Archdiocese of Burgos, Spain. He arrived in South Florida in September 1964 and served as parochial vicar at St. Rose of Lima, Miami Shores (1964-66 and 1970-71), St. Michael, Miami (1966-67), St. Mary Cathedral (1967-69), St. Brendan, Miami (1969-70), and Immaculate Conception, Hialeah (1971-73). In June 1973, he was named administrator of St. Ann Mission in Naranja, where he served until June 1983, when he was named administrator of St. Raymond in Miami. In April 1988, he was named to his current post as administrator and then pastor of Sts. Peter and Paul Church, Miami.

His longtime parishioner, Carlota Morales, who also worked with him for many years as assistant principal (1981-1990) and then principal (2001-2019) of Sts. Peter and Paul School, wrote the following reflection:

Father Lopez has been our leader for 42 years and always respected. I am sure that when he left his previous assignments, he overcame many emotions and then, we hope, that he fell in love with his new assignment, us, at Sts. Peter and Paul Church. I am sure that as he reflects on these 60 years (2/3 of them with us), he must have asked himself many questions and felt a myriad of emotions.

Speaking as Father Lopez’s parishioner since the day he came to Sts. Peter and Paul in 1988, I can say he has impacted us in a million different ways. He is a man of service and compassion; always beside his parishioners in times of tribulation, encouraging us, guiding us, never judging us.

As Father Lopez begins a new decade in his priestly ministry, he should know that he has been good and kind to many of us. He has made so many disciples in two continents. The Holy Spirit has been his faithful companion in his 60 years of priesthood. The Holy Spirit will continue to stand next to him. As Pope Benedict once said: “Together we may thank the Lord who has enabled us to grow in communionÃ¢â¬Â¦”

The Church and his ministry have been a lovely reality throughout Father Lopez’s 60 years in the priesthood. He has given his heart to Jesus and to us, his parishioners. For that we thank him and will forever be grateful. Personally, in this beautiful celebration, I want to remind him that today is the first day of the rest of his life.

We will always be grateful to him and for him.

Susan Davila - 07/13/2022 06:55 PM
So grateful for Father López many years of service. I am blessed to have been a parishioner, and an employee of Sts. Peter and Paul. I always felt peace being in his presence. He always inspired kindness and forgiveness to all. May The Holy Spirit continue to enlighten you and use you as an instrument to radiate peace. THANK YOU for you service.You will be greatly missed. Many blessings, Susan Davila