The dual patron saints of the church look out over the nave. St. Peter, left, is shown with the keys to the kingdom of heaven, given him by Jesus. Paul holds one of the 13 New Testament manuscripts ascribed to him -- and the sword with which he was martyred.

The central crucifix at Sts. Peter and Paul combines the themes of death and resurrection.

One wall of Sts. Peter and Paul has windows depicting episodes from Paul's life. In this one, Paul is struck blind by a light, halting his campaign to persecute Christians.

Paul is shipwrecked on Malta.

Paul's disciples lower him in a basket to evade his persecutors.

Paul is stoned by a crowd.

Paul is martyred by beheading.

The opposite wall shows episodes from Peter's life. Here, Peter and others hear Jesus' call to "Follow me."

Jesus gives Peter the keys to the kingdom of heaven.

Jesus, walking on the Sea of Galilee, rescues Peter from drowning.

Peter casts a net in the sea.

Peter is among those who receive the Holy Spirit at Pentecost.

Peter is martyred by upside-down crucifixion.

A bunch of grapes recalls the wine of the Eucharist.

Stalks of wheat recall the bread of the Eucharist.

St. Jude is considered the patron saint of lost causes.

Jesus shows his wounded hands and his Sacred Heart in a full-size statue.

A statuette of Our Lady of Charity embodies the church's closeness with the surrounding Cuban-American community.

MIAMI | Saints Peter and Paul are acknowledged as fathers of the Church, yet there is no feast for either of them. Instead, their lives and deaths are celebrated together, each June 29.

Peter was the first apostle to confess Jesus as the Messiah, and he served as its first pope. Paul carried the Gospel to the gentiles, founding and guiding congregations around the Mediterranean. Both men ended up in Rome, where they were martyred.

Peter emerges as a dominant figure in the Gospels, surpassed only by Jesus himself. The disciple comes off as sometimes brave, sometimes cowardly; sometimes insightful, sometimes impulsive; scarred by shame, then growing into a leader and spokesman.

The dual patron saints of the church look out over the nave. St. Peter, left, is shown with the keys to the kingdom of heaven, given him by Jesus. Paul holds one of the 13 New Testament manuscripts ascribed to him -- and the sword with which he was martyred.

Born with the name of Simon, he partnered with James and John as a fisherman on the Sea of Galilee. Their mundane life was ended by Jesus, who miraculously caused their nets to break from a huge haul of fish. Jesus then called them to become “fishers of men.”

Simon was part of the disciples’ inner circle, along with James and John. The three witnessed Jesus’ transfiguration with Moses and Elijah. And Jesus seems to have stayed at Simon's house while ministering in Galilee.

Simon, however, often veered between faith and fear. When Jesus walked on water, he boldly walked out to meet him, then faltered and sank when he saw the storm around him.

He also was the first to confess Jesus as the Messiah, “the Son of the living God”; Jesus in return renamed him Peter, meaning “Rock,” the foundation of the embryonic Church. Immediately thereafter, though, Peter rebuked Jesus for predicting his death and resurrection – prompting Jesus to call him a “satan” who judged by human standards, not those of God.

Peter’s breaking point came in Jerusalem as Jesus was put on trial. Although he swore he never would, he denied knowing Jesus – then “went out and wept bitterly.”

From that low point, Peter developed into the leader of the disciples and the Church in Jerusalem. On Pentecost, he spoke for the others in proclaiming Jesus’ resurrection. And he sided with Paul in welcoming gentiles to the fold.

Two New Testament books bear Peter’s name, urging believers to stand firm in the face of persecution. He is also believed to have furnished the material for the Gospel according to St. Mark.

Peter died in Rome, crucified on Vatican Hill – upside down, at his own request, deeming himself unworthy to die in the same way as his Lord. He was buried in the same spot – and, in 1968, Pope Paul VI declared that an excavation had found his tomb below the basilica named for him.

In contrast to Peter’s humble start in a fishing village, Paul came from Tarsus, a prominent center of philosophy and education in Asia Minor. As a Roman citizen, he understood the pagan culture of his time. As a Pharisee, he was learned in the scriptures and teachings of his fellow Jews. His parents named him Saul, in honor of Israel’s first king.

Jesus shows his wounded hands and his Sacred Heart in a full-size statue.

At some point, his family moved to Jerusalem, where as a young man he opposed the new sect of Christians. He held the coats of those who stoned St. Stephen, then began arresting believers in their houses. Saul then set out to do the same in Damascus.

His plan was cut short by a blinding light that knocked him from his horse. “Saul, Saul, why are you persecuting me?” a voice asked – then identifying itself as that of Jesus. He continued to Damascus, where he was healed and baptized. He then took the name Paul, Latin for “small” or “humble.”

Paul then spent more than three decades traveling to major cities like Corinth and Ephesus, establishing and nurturing new Christian communities. Some of his co-workers became prominent figures themselves. Two of them, Mark and Luke, wrote the Gospels that bear their names. Mark is also credited with founding the Coptic Church in Egypt.

Often, Paul and his companions were beaten, jailed, even stoned, for proclaiming the Gospel. He was once shipwrecked on Malta, where he survived a venomous snakebite. Finally, he was placed under house arrest in Rome, then beheaded by Nero.

Despite his epic travels, Paul’s most lasting contribution may be his letters, which make up 13 of the 27 books in the New Testament. They deal with moral and practical matters of Christian living and church administration. They rebuke the wayward and strengthen the persecuted. Most importantly, they set out the first systematic theology on how Christ fulfilled the Hebrew scriptures, yet made salvation available to everyone for all time. 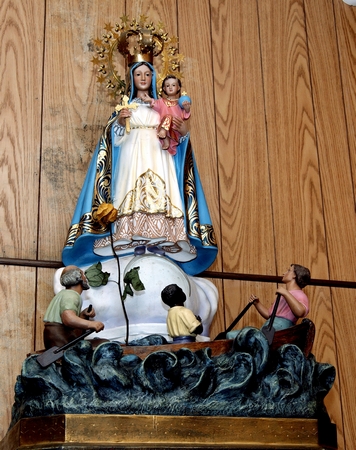 A statuette of Our Lady of Charity embodies the church's closeness with the surrounding Cuban-American community.

St. Augustine said it best in the fourth century: “Even though they suffered on different days, they were as one. Peter went first, and Paul followed ... Let us embrace what they believed.”

When Sts. Peter and Paul Parish was formed, South Florida was still part of the Diocese of St. Augustine. In 1939, the diocese created a new parish in southwest Miami, relieving some of the pressure from the downtown Gesu Church, which had already existed more than four decades.

The first Masses were celebrated in the Tower Theater on Flagler Street – drawing the label of “air-conditioned Catholics,” according to Miami historian Paul George. But that didn't last long: the following September, landowner Olive Brickell donated land for a new home.

That Christmas Eve, 1,000 congregants celebrated Mass in their own home – on a “classic ‘Moon Over Miami’ night,” in George’s words, because the roof had yet to be added. But the building was completed and dedicated two months later.

Sts. Peter and Paul grew fast, launching an elementary school in 1941 and the first year of a high school the next year. The church became one of the first parishes of the Diocese of Miami, which was formed in 1958.

The parishioners began a variety of activities: Christmas plays, Halloween carnivals and May Day processions. The Cuban influx of the 1960s prompted Sts. Peter and Paul to found an outreach to refugees, and to add a second session to its school day. The church’s work gained national recognition in 1980 with a visit from Ronald Reagan, before he was elected president.

Former members have included a military general, two major league baseball players, a bank president and a county public school superintendent. And a group of its school alumni have attended two holiday football games – the Turkey and Santa Bowls – for more than six decades.

Carlota E. Morales Ed. D. - 06/23/2021 07:07 PM
Under the leadership of so many wonderful priests,Sts.Peter and Paul has been a beacon of light and of hope to our community. Since I came from Cuba in 1961 I have witnessed their commitment to us, the parishioners and the students of the school. As we celebrate the feast of our patron saints on June 29, I would like to thank all the priests who have served in our parish especially our present pastor, Father Juan M. Lopez, They have given so much of themselves to the church and to the school for so many years. Congratulations, Sts, Peter and Paul community. May the Lord continue to bless us. Carlota E. Morales, Ed. D.