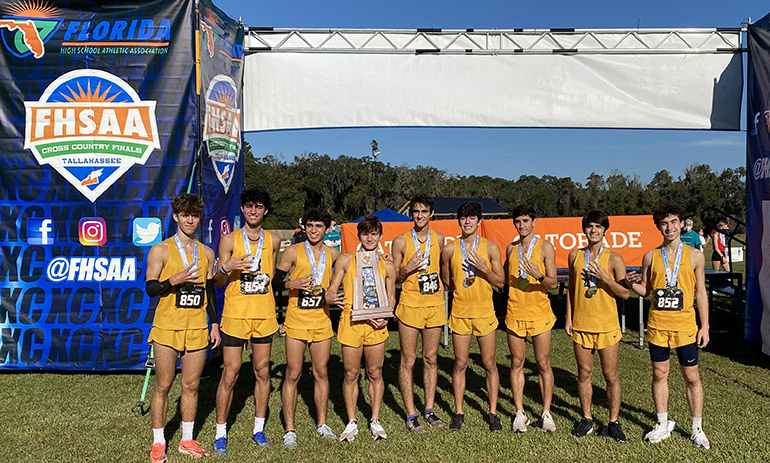 Belen Jesuit established itself as the best cross country program in the history of the state Nov. 14, 2020. Head Coach Frankie Ruiz, '96, moves past legendary Largo Coach Brent Haley with his 11th state championship title; the school's 12th and fourth consecutive.

MIAMI | Frankie Ruiz molded Belen Jesuit into a team that has set the standard for high-school cross country for the past 19 years. On Nov. 14, 2020, Javier Vento and his fellow Wolverines set Florida history, becoming the first team to win 12 state titles with a rout of Sunlake High School in the class 3A finals.

The Wolverines added to their lead over Largo, which won 10 titles in 1970-87. Ruiz said he reached out to former Largo coach Brent Hailey. “I’d never spoken to him before,” Ruiz said. “I congratulated him for his successes. Our successes had a lot to do with how high he set the bar.”

Belen followed the lead of eight seniors in its top 11 runners. They guide a team that totals 50 runners. Ruiz said this year, the seniors wanted to eliminate a lull that has hit past Belen dynasties. The Wolverines won three in a row 2006-08, then four in a row 2010-13, then another four in a row 2017-20. Vento and junior Adam Magoulas focused on setting an example for the younger generation of Belen runners – a generation that has found success at lower levels.

“The seniors are very focused on doing their part to lead a team that can go for a fifth,” Ruiz said. “Especially the last few weeks, they were trying to leave the younger guys with the right things for next season.”

Vento won his second individual state title in 15 minutes, 22.2 seconds. Ruiz said that the University of Florida signee had a laser focus to win another individual title. Ruiz said that Vento’s only outside focus was to decide on where he’d run in college. Once that was decided, he trained harder trying to get faster. Ruiz lauded junior Magoulas for pushing Vento. 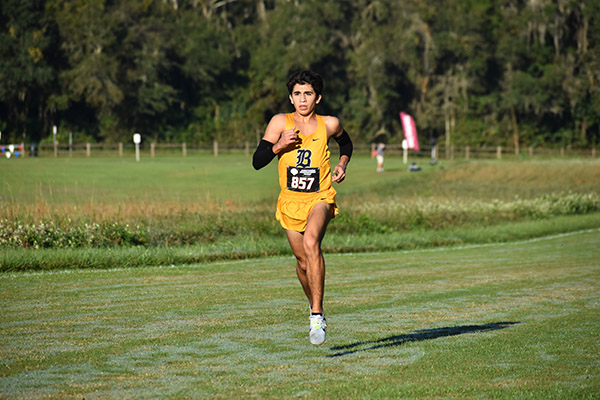 Javier Vento, '21, pictured here, is now the second Belen runner to win two individual state championships. Aiden Villasuso, '21, ran the race of his life and finished as a state runner-up at the Nov. 14, 2020 finals, where Belen also had four runners come in under the 16:00 mark.

“Before the actual race, (Vento) and I had an exchange: Don’t forget to win,” Ruiz said. “It’s not about setting a personal record. It boils down to if you want to be a state champion.”

Vento led wire to wire. He said he carries a strategy into each race. “I didn’t expect to be close to everyone the first mile,” Vento said. “Once I hit the mile, I put on a surge.”

Senior Aiden Villasuso made it a 1-2 Belen finish in 15:41.6. Villasuso was eighth after the first mile, then climbed five spots at the second mile before his second-place finish. Ruiz said that Villasuso put in a heavy volume of miles, which paid off at state.

Villasuso said for most of the race, he followed whoever was in second. Then with 800 meters left, he started his kick. “At the beginning of the last hill, because I saw the guy next to me hurting, I put in a nice surge,” Villasuso said. “I kept a surge to the end of the race.”

Ruiz said he expects his top 7 runners to stay close to each other. He said it helps them to push each other, especially when opponents are unable to. “Our compression to fifth wasn’t what we discussed, but those middle guys were within sight of No. 5,” Ruiz said. “They did what they had to do.”

“JUST US AND THE ALLIGATORS”

Belen Jesuit unites all its 50 runners in its typically demanding workout regimen. COVID-19, which shut down most of sports in March and threatened the 2020 fall season, forced the Wolverines to change their workouts.

Ruiz said losing the 2020 spring track season proved a small blessing. Losing track set up a longer training period, a period extended longer by the later start to the season. And because the students were all in distance learning, Ruiz said that allowed his athletes to treat their bodies like the pros. “They were home all the time, so they’re able to rest between workouts,” Ruiz said. “I pushed them sooner, because they had rest at home.”

Ruiz experimented with more miles. However, he had to split his team into 10-runner groups to accommodate CDC and state government guidelines, including temperature checks before each workout. The Wolverines even canceled their annual summer trip. Ruiz said none of Belen’s top 14 runners caught COVID, and only two of a 55-strong team did.

He also depended on the Wolverines to put in their own work. “We have a term ROYO – run on your own,” Ruiz said. “This year, it took special meaning. They took their ROYOs seriously, and we were tracking with a coaching app. There was accountability through group chat.”

Ruiz even ran Zoom workouts. While fun at first, the novelty wore off. In mid-June, the team started running together. Yet their normal training parks threw them out. They tried running in neighborhoods to no avail. Eventually they started meeting in the Everglades and ran the levees. “It’s just us and the alligators,” Ruiz said.

Vento said the work the team put in to not only run more, but also avoid COVID was rewarded with the trophy. “Throughout the season, we had to stay safe,” Vento said. “The teams stayed in our own bubble so we could continue having a season.”

Villasuso said COVID restrictions also focused their accountability. “When we had a long run or workout, we had to be there for each other,” he said. “This year was extraordinary. We were motivating each other to do great.”

Magoulas said that each group was its own mini-team. “This group got so close. That helps with the state meet. I’ll look back at the memories.”

Ruiz said that the first few practices, the athletes didn’t want to go home. They wanted the camaraderie. “It further cements what sport and running is all about: that connection, that common goal, working hard,” he said.

The work began to show in wins at the FLrunners.com Invitational and FSU Invitational. The Wolverines ended up being pushed by fellow archdiocesan school Christopher Columbus, which finished second at both meets.

Ruiz said that Columbus has reaped the benefits of their work. “I appreciate it. The guys need to be reminded that teams are always gunning for them,” Ruiz said. “To have a local school, and a Catholic school, is good. We see them in many of the same places.”

Ruiz hopes that the Wolverines will get a spring track season to help prime the pump for a 13th title. Having the best junior-varsity team in the state also helps.

“I have to work harder to find the guys on the junior varsity more competition,” he said. “It’s tough when we put the first 15 spots in a JV race. I’m excited. We do have young guys, a lot of ninth-graders who are fired up. It’s upon them to have a good track season so they can have an excellent cross-country season.”

The Wolverines will turn to Magoulas and Rodriguez, who will be seniors next year. For Magoulas, winning that fifth consecutive is already a goal. That would tie Tallahassee Maclay for most consecutive titles; Maclay won 1998-2002.

Magoulas said the pressure is already on. He and his fellow juniors have begun discussing it in chats. He wants to follow his brother in leading a state champion.

“I have to take it as seriously as I did this year,” Magoulas said. “You can’t hold back any days to win five in a row. You need very few mistakes.”

Vento said the leadership is in good hands. “I trust Adam with everything,” Vento said. “I ran with him a long time, he started in eighth grade. He’s a great teammate. To continue this tradition, we have to stay competitive with each other. That’s what makes us different – we’re extremely competitive at practice. Some races it’s not competitive; it turns out we’re racing each other. What we have on the team is a competition every team in the country needs to grow.”

This article has been changed to correct the number of years Frankie Ruiz has been coaching at Belen. He has been there 19, not 14 as originally stated.