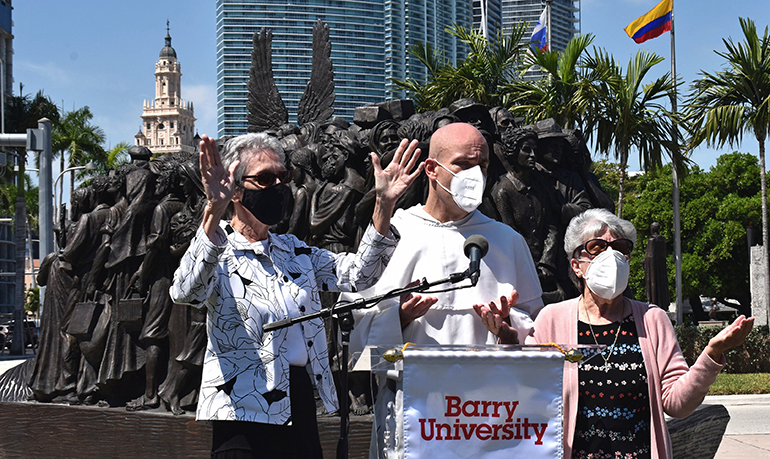 Leaders of Barry University lead a Dominican prayer in Miami during the announcement of the university's new Institute for Immigration Studies. From left are Sister Mary Anne Caulfield, regional superior of the Adrian Dominican Sisters; Father Cristobal Torres, campus chaplain at Barry; and Sister Linda Bevilacqua, past president of the university. Behind them is the sculpture "Angels Unawares," on display at Bayfront Park.

MIAMI SHORES | While giving a tour at Barry University, Giselle Elgarresta Rios perused the files of Cuban refugee children — and was stunned at what she found.

There was the personal file of her own mother, from six decades ago. 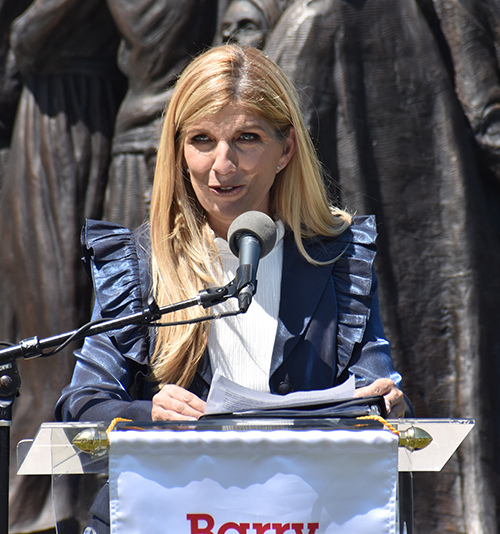 "What people in other parts of the country are studying, we in South Florida are living daily," says Giselle Elgarresta Rios, director of the new Institute for Immigration Studies at Barry University.

"I froze and started to shake," she said about the experience five years ago. "That file humanized all the stories I'd grown up with, about their life in Cuba and their life here ... her fear, my grandparents' courage in sending her to another country, and the opportunities that lay ahead."

The memory sprang fresh this year as Elgarresta Rios became the founding director of the Institute for Immigration Studies at Barry University. The new institute is aimed at understanding the experience of the many people from other lands who have made their home in South Florida.

Cornerstone of the institute will be the archives that Elgarresta Rios visited: the stories of the 14,000 unaccompanied children who fled Fidel Castro's regime in the early 1960s. The project, run by the archdiocesan Catholic Charities, became known as Operation Pedro Pan.

Elgarresta Rios noted that other schools across the country are researching the immigrant experience as well, but she said South Florida is different.

"What people in other parts of the country are studying, we in South Florida are living daily," she said. "We know the struggles, the gaps, the stereotypes. And we know the people and their value to the community."

Although a formal launch isn't scheduled until fall, Elgarresta Rios and other leaders announced the institute’s creation March 23, 2021 at Bayfront Park in Miami. They confessed that they couldn't resist the chance to do so in front of "Angels Unawares," a massive bronze immigration-themed sculpture on loan to the Archdiocese of Miami.

With the 20-foot, 3.5-ton sculpture as a backdrop, various Barry personnel spoke on the need for immigration studies. But the centerpiece was a stirring talk by Archbishop Thomas Wenski, who has made immigration reform a key part of his four decades of ordained ministry.

THE STORY OF THE NATION

Speaking without notes, he voiced beliefs he has often sounded: that people have a right to migrate for a better life; that many biblical figures such as Abraham and the Holy Family were migrants or refugees; and that the Gospel calls the faithful to welcome strangers. 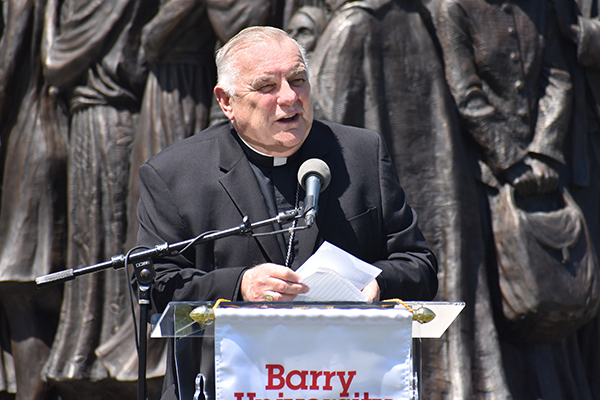 "The immigrant is a stranger to be embraced as a brother or sister," Archbishop Thomas Wenski says during the announcement of Barry University's new Institute for Immigration Studies.

"Too often, the media want to look at migration as a problem," the archbishop said. "[But] no human being should be reduced to a problem ... As we look at the migrant, may we see ourselves in each of them.

"Exciting, exhilarating, fortuitous at this time," was the reaction from Sister Linda, also a 1962 graduate of Barry. "This [institute] will carry forth our values for thoughtful and respectful conversation."

John Bussel, vice chairman of Barry's board of directors, concurred. He reflected on his grandfather, who came to America from Russia at the age of 14.

"I look at Barry students and see my grandfather," he said. "It's all about creating opportunity, and Barry is the ultimate opportunity school." 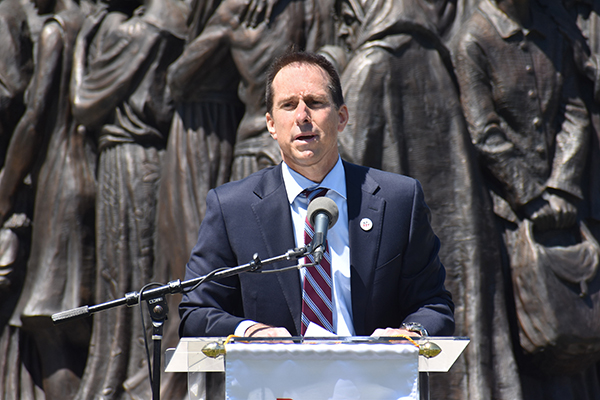 Mike Allen, president of Barry University, ordered creation of the new Institute for Immigration Studies after he discovered the records of Operation Pedro Pan in the university archives.

The new institute lines up solidly with the goals of university president Mike Allen. After arriving in July 2019, he saw the Pedro Pan archive of Catholic Charities and was impressed.

"There's an incredible need to address and reform immigration in this country," he said during an interview. "And there's a clear and perfect alignment between the Church and the universities on immigration."

Allen noted also that the specialties among faculty members — including history, sociology, social work, economics and political science — made Barry a good site for such an institute. That led to a discussion with board members, then to a campus-wide search for a director. 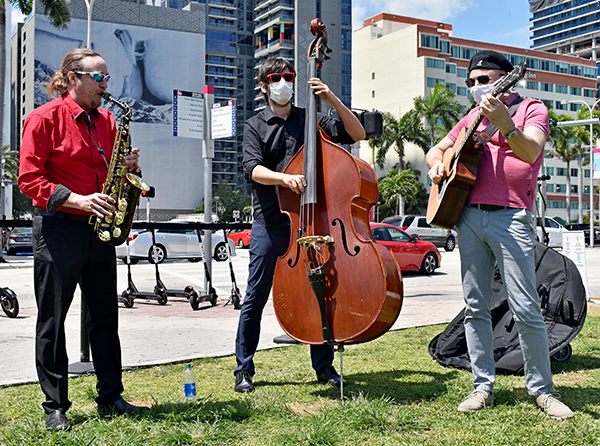 The Barry University Faculty Jazz Trio provided music before and after the announcement of the university's new Institute of Immigration Studies.

As a music professor of 25 years at Barry, Elgarresta Rios may not be the most obvious choice. But besides her heritage as the child of a Pedro Pan, she said she has worked for a decade with youth choirs and orchestras of various lands, creating "educational programs for social change," she said.

When she learned about the opening in the new institute, "I felt the calling," Elgarresta Rios said simply. "I saw how it could impact the community."

She plans to get academic fellows from Barry to mentor students to develop research papers on immigration. Many graduate students do so already, she said.

Within a year, she expects to build several support structures: a faculty advisory committee, an advisory board of community leaders, and even a student coalition to help her understand what they need.

Scheduled for April 12, 2021 will be a Zoom dialogue on families who are separated by immigration. Washington, D.C.-based Catholic University of America will present a psychology professor and a Pedro Pan alum. Barry will contribute a social work professor, plus Carmen Valdivia, director of the Miami-based American Museum of the Cuban Diaspora.

Elgarresta Rios' 10-year plan includes a dedicated space for the institute, complete with a digital lab where students can work. She'd like to see a certificate program, perhaps a minor, in immigration studies. Other ideas include a conference at Barry on immigration. A continuing role would be to have the institute "represent truth in policy" at the university.

Elgarresta Rios mentioned a sense of urgency, now that the Pedro Pan children of the '60s are upwards of 70 years old. And scholars have just begun to study their children — what has been called Pedro Pan II.

"Their stories will be even more valuable in years to come," she said. "The topic has just begun. I feel a responsibility to nurture the future. We have to learn from the past." 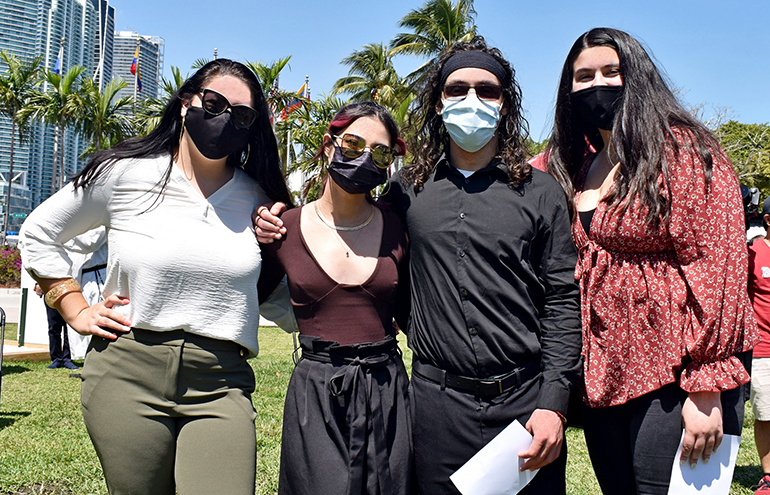