Class of '21 praised for 'faith, excellence and service' 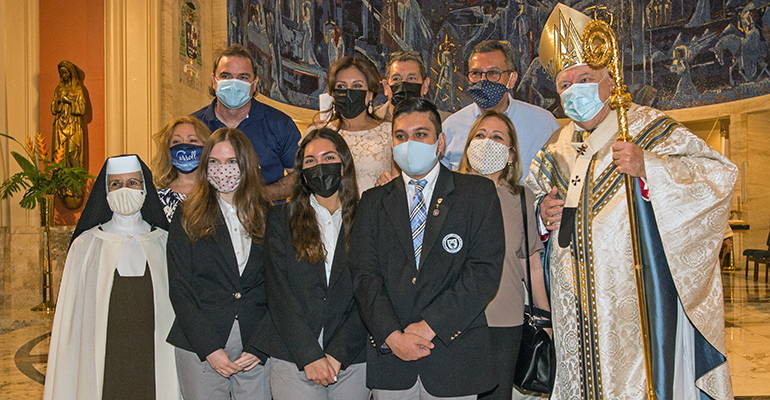 MIAMI | For the second pandemic-marked year, Archbishop Thomas Wenski celebrated a single “remote” baccalaureate Mass for all the graduates of Catholic high schools in the archdiocese, which was livestreamed on the archdiocesan website May 24.

In normal times, each school celebrates its own baccalaureate Mass, but the COVID-19 pandemic has interrupted that tradition. Unlike last year, however, when the archbishop celebrated in a nearly empty St. Mary Cathedral, this year he was joined by three representatives of each high school class, their principal, and parents. The student representatives were the class valedictorians, salutatorians, and recipients of the Archbishop Thomas Wenski Catholic Leadership Award. 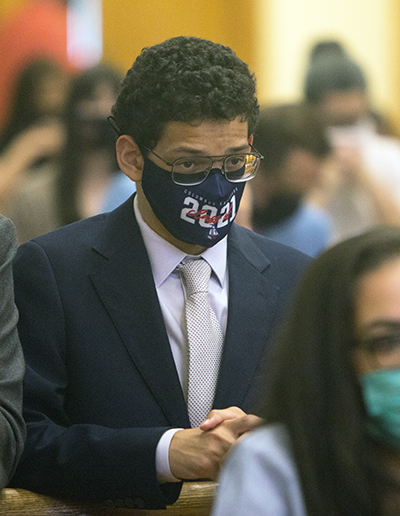 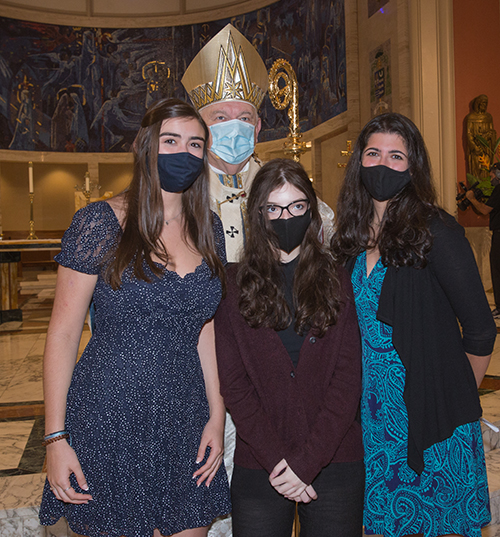 According to the archbishop, the 27 students, from nine of the 12 Catholic high schools in the archdiocese, exemplified the theme of Catholic Schools Week, “Faith, Excellence and Service.”

Sebastian Reeder, 17, from Cardinal Gibbons High School in Fort Lauderdale, was one of the seniors to receive a leadership award. He will study business at the University of Alabama, Tuscaloosa. Reeder and his family have participated in a Christmas toy drive and other charitable activities at their church, St. John the Baptist, for many years. Sebastian started helping when he was seven years old.

Reeder has helped collect toys for the Jackson Memorial Hospital burn unit, Covenant House, St. Philip Parish in Belle Glade, Kids in Distress and several other groups, including the children of migrant workers in Immokalee. Many of the workers live in rundown trailers and work in the fields to support their families, so they don’t have the money for Christmas presents.

“We went to Our Lady of Guadalupe Church in Immokalee,” Reeder said. “The people there are very religious. It felt good to put a smile on the kid’s faces.”

Elizabeth Fitzgerald, 18, with a grade point average of 5.27 at Archbishop Carroll High, was among the valedictorians at the Mass. She said her father has influenced her choice of career and university. As a member of the Air Force, he came to South Florida to serve at Homestead Air Force Base, and as an F-15 crew chief he oversaw the plane’s operations. His parents emigrated from Ireland. Elizabeth is on her way to Notre Dame University, home of the Fighting Irish, where she plans to study aerospace engineering.

“The sisters at Carroll High School have been very helpful in guiding me,” she said. “They are wonderful, and my science teacher, Mr. Juan Rodriguez, was great. He makes us think outside the box. My father took me to see the jets at the air base and I sat in one of them. I really like that I’m going to a Catholic university.”

Kamila Trigueros, 18, St. Thomas Aquinas’ salutatorian, will study biological science at the University of Florida with a view toward studying medicine. She said that the class of 2021 made the best of its “new normal” circumstances, which since the first week of October 2020, included classes where some students attended online and others in person.

“We proved our resilience, motivation, determination and optimism in times of confusion, concern and uncertainty,” Trigueros said. 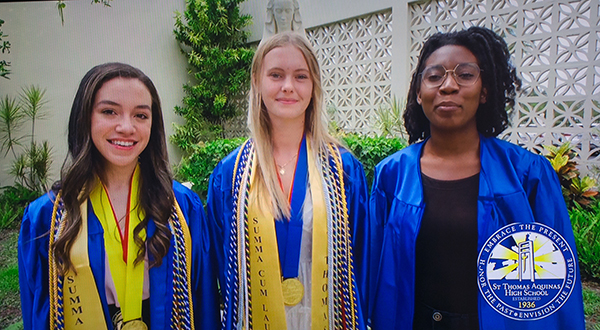 Offering greetings from their school in a loop that ran before the start of the baccalaureate Mass, from left: St. Thomas Aquinas High School's Kamila Trigueros, salutatorian, Victoria Szymkiewicz, valedictorian, and Archbishop's Leadership Award winner Kensia Saint-Hilaire. Representatives of nine of the 12 Catholic high schools in the Archdiocese of Miami took part in the Mass, celebrated by Archbishop Thomas Wenski May 24, 2021 at St. Mary Cathedral.

Archbishop Wenski told the students that one chapter in their life’s story was coming to an end but a new one was beginning.

“As Americans, even in this time of global pandemic, social unrest and a troubling economic uncertainty, you have many opportunities to develop your talents and you have been raised with a great sense of generosity, service and fairness,” he said.

He told the students that they have received an education based on Catholic values, an education that presents a world view that God matters. 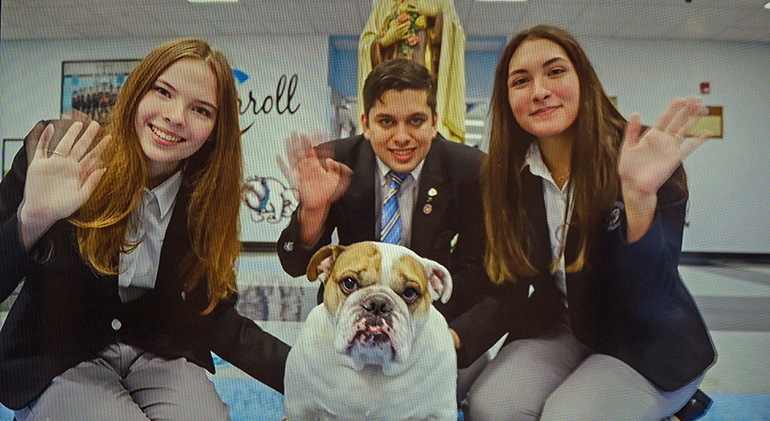 Offering greetings from their school in a loop that ran before the start of the baccalaureate Mass, from left: Archbishop Coleman Carroll High's Elizabeth Fitzgerald, 18, valedictorian; Daniel Valdez, 19, Archbishop's Leadership Award winner; Camila Gloria, 18, salutatorian, and the school's bulldog mascot, Archie. Representatives of nine of the 12 Catholic high schools in the Archdiocese of Miami took part in the Mass, celebrated by Archbishop Thomas Wenski May 24, 2021 at St. Mary Cathedral.

Articles(67)
Our Lady of Lourdes Academy