Putting life on the menu

'No cost, no ask, no politics' luncheons aim to get pro-lifers out of their respective 'silos' 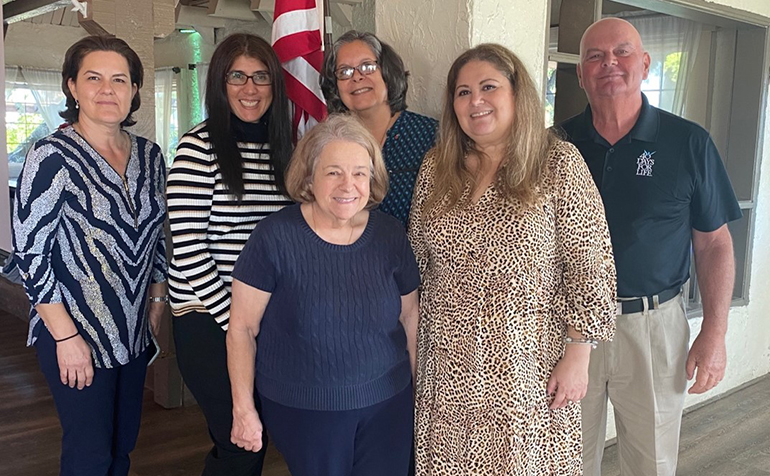 MIAMI | Harnessing the power of the Holy Spirit to get things done, a Catholic philanthropist has launched a series of “no cost, no ask, no politics” luncheons aimed at harnessing the combined power of Florida’s pro-lifers.

The benefactor is Janine Marrone, an entrepreneur with a background in strategic marketing, business development, and operations. The impetus came from an article she read about Luncheons4Life and its founder, Mike Hammer, published in the June 2012 issue of The Word Among Us.

Hammer credited divine inspiration for the idea of hosting a free luncheon to bring together pro-life workers of all denominations at one of the finest restaurants in New Orleans. He has been doing so since 2005.

His hope that other businesspeople around the country would step up and do the same resonated with Marrone, who had just retired and was looking for “something fun to do.” 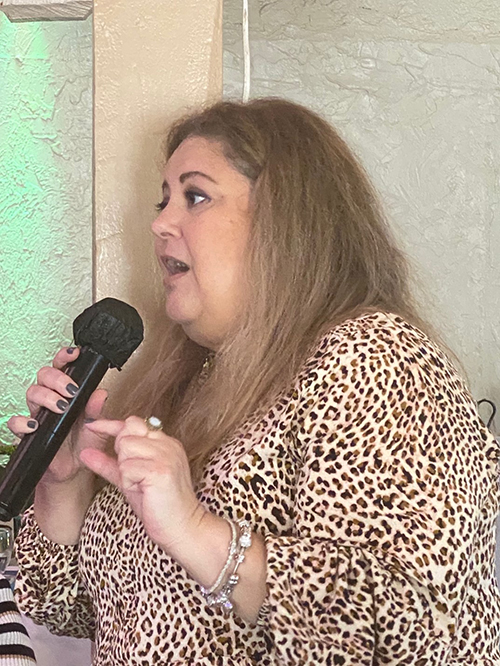 Luncheons4Life organizer Jacqueline Debs says she wishes to create a safe space where all pro-lifers can gather, support each other, and not judge each other. She also wants to remove the stigma from the pro-life movement in the general community and bring in people who are not necessarily pro-life, but are people of goodwill who have never been to a pro-life activity.

Partnering with Kathie Majerchin, a good friend and then director of development for Solve Maternity Home, they held the first luncheon in April 2013 in Sarasota. Although Majerchin died in 2016, divine providence intervened, bringing along Jeannine Byrne, also a retired pregnancy care center director, who became instrumental in the project before Majerchin’s death.

Today, Marrone holds 11 Luncheons4Life per month, seven in Florida and one each in Atlanta, Alton/St. Louis Metro East, Louisville, and Oklahoma City.

With smooth, franchise-like consistency, Luncheons4Life functions as if on auto-pilot. And while the list of speakers is impressive, the apex of the event is the passing of the mic.

As with superconductivity, where electrons perform with greater efficiency when they pair up, momentum results when abortion counselors come out of their independent silos and engage with maternity care centers or adoption agencies.

Marrone explained that silos are great for grain and corn, but they impede activities that are beneficial to society, which thrive on interaction.

“Things rarely happen over the phone when you don’t see people face to face,” said Marrone, who believes opportunities for interconnectivity around a good meal are inside God’s providence. “You want to link arms and hands and motion in the same direction. If you can get them all together, they can do it together and leverage all that energy, which means less work, less money and optimal outcomes.”

NO COST, NO ASK, NO POLITICS

The three hallmarks of the platform – no cost, no ask, and no politics – may fly in the face of conventional business wisdom, but Marrone does not want to sell you a bridge, and she will not accept donations. She also holds that it is not laws that change hearts, but hearts that change laws.

“Politics sucks the air out of what you can do. There are things that can be done at a grass root, local level that do not need a politization or local official’s involvement,” Marrone said.

As for the luncheons’ smooth running, “There’s a bit of administration but then you just get out of the way,” she said, recounting a story from the early days about a group of ladies who were traveling from Bradenton to the Sarasota luncheon.

Majerchin thought about splitting the women up at different tables once they arrived. But Marrone reasoned otherwise. “No Kathie, you can’t do that,” she told her. “We have to rely on the Holy Spirit to sit people where they are supposed to be. Once you try to over-orchestrate, you are trying to overlay your will with God’s will.”

“How much easier life could be if I leaned on the will of God in all aspects of my life like we do for Lunchons4Life,” Marrone said, emphasizing that Luncheons4Life is not run by a village, but from the Kingdom above, where she is confident “Kathie is truly, and effectively assisting with ‘orchestration.’”

It may be worth prefacing that Marrone is a daily communicant and spends much time praying before the Blessed Sacrament. She also enjoys playing golf, a sport which she started inviting God into because of its numerous philosophical parallels with life —especially in terms of attitude and decision-making.

If Marrone wouldn’t grab a chipping wedge without consulting God, it’s a safe bet that each person she chooses to coordinate and organize the local luncheons has been pre-selected by him. 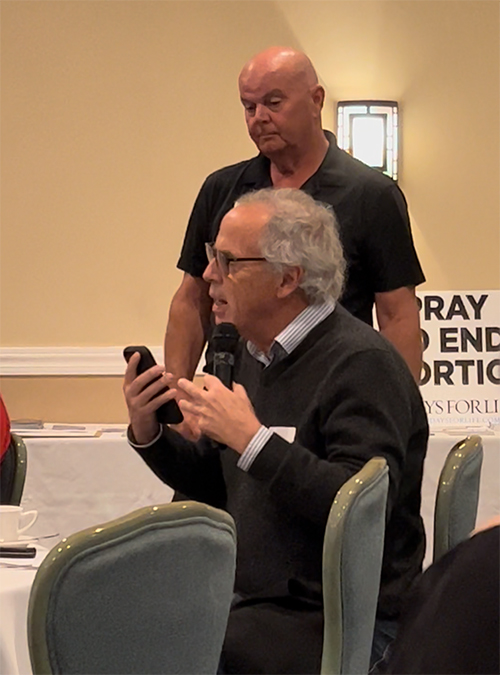 Luncheons4Life organizers Tom Walker, top, and Paul Herron take a turn at the mic at Tropical Acres Steakhouse in Fort Lauderdale in January 2022. Herron heads the luncheons for Palm Beach County. He encourages everyone to not give up on adult children. "We have to tell them about the importance and value of chastity and abstinence, and the right time and place to share that true, mature adult love within the context of a holy marriage. It's just really something that we have to do because everything else is trying to recover from not having done that. When you think about all the things we have to do, it’s all after the fact."

Paul Herron’s homeless feeding ministry led him to come to Luncheons4Life in Broward County, hoping to find help for a pregnant woman on his feeding line. He just happened to sit next to Marrone herself and was later approached about organizing a luncheon in Palm Beach County.

“I knew this was going to be a safe space for all prolifers to come together and that is what was needed in South Florida,” said Debs, who first attended the monthly luncheon held in Broward County. There she met its organizer, Tom Walker, director of Fort Lauderdale’s 40 Days for Life campaign.

“I want them to come to this wonderful lunch with wonderful people and understand that the prolife movement is a grassroots movement that is in their homes, communities, and churches and is made of normal, decent people who are trying to do the right thing, and to also understand all the good that the prolife community is doing,” Debs said.

Gabriela Cejnarova is a Respect Life parish representative at St. Bartholomew in Miramar who just began attending the luncheons. Cejnarova brought her pastor, Father Andrew Chan-A-Sue, and another friend who wants to get involved in the prolife ministry as a result of Luncheons4Life. 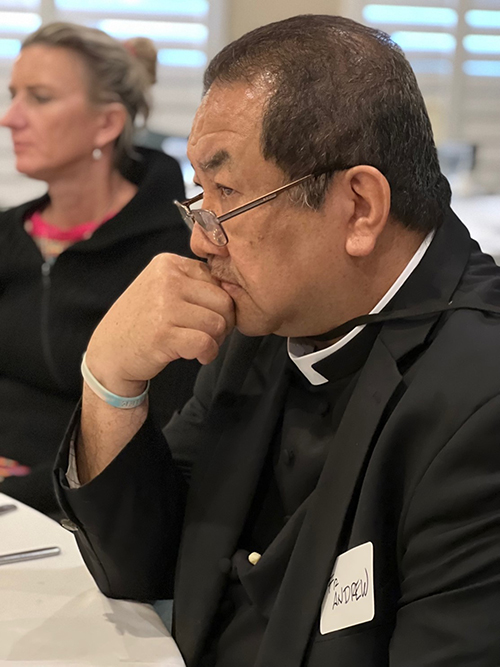 “I think that it is a source of encouragement,” said Father Chan-A-Sue. “We meet others who are passionate about defending the sanctity of human life and this energizes us because most other Catholics around us are lukewarm on this issue. It is also a source of the many other different ways and techniques we can educate others on the sanctity of life.”

He cautioned, however, that “unless we put into practice what we learn at these meetings, this could result in lots of discussion and socializing and no action.”

But if that were true, Marrone said she would have quit years ago. “This is not just a fun thing – this thing works.”

Ask Suzanne Mendez, who shared how the Holy Spirit showed up at Seasons 52, the luncheon venue in Palm Beach Gardens, with an immediate answer to a very specific prayer, a desire that had been on her heart for months. She needed resources to create a national online directory of life-affirming organizations.

“It goes to show that the Holy Spirit is working through these events,” Mendez said, adding that the new directory should be available soon.

“Through Luncheons4Life, we have been able to come and help others in their ministries and they have brought referrals to us,” said Toni Weiz, founder of Ashes to Beauty, a post-abortion healing program in Palm Beach County that is also available online.

“Three of us have given our testimonies at Luncheons4Life, which is great experience and great practice. Now that we have more and more speaking engagements, that has launched us into an area that I don’t know that we would be doing if it weren’t for Luncheons4Life,” Weis said.

“Abortion is the most important issue we are dealing with in our society; it is the worst evil,” said Tewannah Amen, director of Broward Right to Life. “We are each an individual who can make a difference for life. We have that circle of influence, people that we know. It’s so important for us to present the truth and not be afraid.”

“Every time the bill is paid, I must question whether there is any other place that money could be better spent, and the answer is no, because it has a knock-on effect,” Marrone said. “It’s the gift that keeps on giving.”

As a result of a post-abortion testimony given at a Luncheon4Life in Sarasota, Janine Marrone realized there is more than one victim of abortion. After bringing Project Rachel, which helps post-abortive women, to the St. Petersburg Diocese, she established another initiative, Support After Abortion, an international interfaith clearinghouse that promotes abortion healing.

Marrone is now looking to expand the concept to other areas. She is looking at charities and agencies that work on hunger and homelessness, silos of activity where people might not talk to each other and no single agency is one-stop shopping.

“When you bring like-minded people around an issue, it can get solved,” Marrone said.