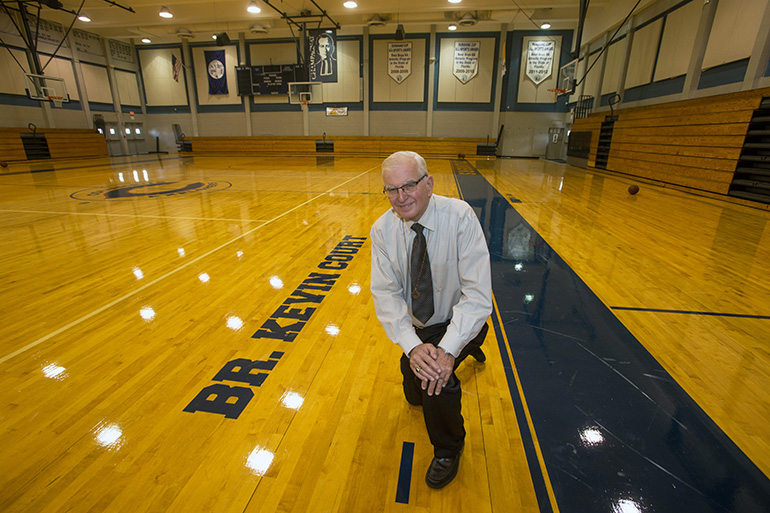 MIAMI | As Christopher Columbus High School marks the 60th anniversary of its establishment, it celebrates the Marist Brothers’ educational legacy and the robust Christian brotherhood of some 15,000 alumni.

Now the boys school sets sail “Adelante!” for 60 more years of development and exploration, starting with a capital campaign launch in October for a new fine arts building and parking complex, and a gala at the J.W. Marriott Marquis in March. 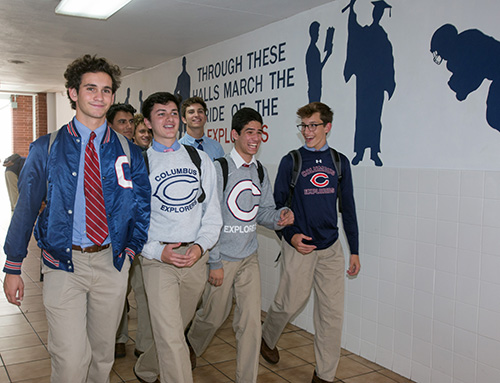 In a more bittersweet milestone, Marist Brother Kevin Handibode, 79, spearheads his final, $15 million building project as president before stepping down come the end of this academic year.

Nicknamed “the shark” as dean of discipline, he arrived from New York in 1966 and served previously as varsity basketball coach, teacher and athletic and development director â including over 30 years as fundraiser extraordinaire. He spoke humbly of his life’s mission in service of youth from his office in the Mas Technology Complex, punctuated with a framed papal cross and alumni photos including of Miami-Dade Mayor Carlos Gimenez in basketball uniform.

Brother Kevin still coaches freshmen basketball and attends other Marist school board meetings and alumni gatherings nationwide. He looks forward to continued work at Columbus, where he has inspired thousands of youth.

“I thank the good Lord for giving me the good health and the energy,” he said. “To build facilities is one thing but why are you building them? For the students and faculty so that you can educate students better. It’s the caring, the family spirit, and that’s what Father Champagnat wanted the Marist Brothers to do, make Jesus Christ known and loved through the Christian education of youth, especially to the most neglected. It’s been a wonderful experience.”

“I have a tremendous amount of respect for the work they have done to lay this foundation. We have 60 years of tradition and history of excellence in every phase of what a school should be â academics, community service and, with 1,700 boys, an athletic program,” Pugh said.

He noted that the motto for this year is “Adelante (forward) for the next 60 years,” and added, “There’s a lot of excitement about that and I think the kids feel it. The last two classes have been the largest classes in school history, 1,710. When I came here 21 years ago we had about 1,200 so it’s grown quite a bit. It says a lot about the school, it says a lot about the community, about the families who send their sons and our alumni who continue to give back.” 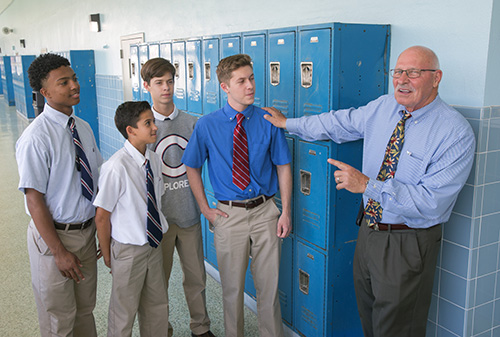 Guidance counselor Carter Burrus arrived himself as a student in 1959. He recalled the school’s early days out in the “wilderness” beyond the two-lane Bird Road with Bird Bowl and Frankie’s Pizza, where extracurriculars included a rifle club for hunters. He and others used to ride on the back of a pick-up truck to school rain or shine and he hitchhiked to a nearby cow pasture for football practice until the school cleared its own field. “We planted the grass and when we first started playing on it, it was all coral rock and you didn’t want to get tackled because you’d injure yourself on the coral rock!”

Along with about a third of today’s faculty, Burrus returned to his beloved alma mater. “I’m just happy that I’m still part of it for the 60th anniversary,” he said. “It’s still the same brotherhood as when I was here, it’s just much bigger. We had only 250 people.”

Burrus has embraced the Marist philosophy to “teach everybody” and reach all levels of learners. Every student also can grow physically in the All Sports Fitness Complex and Bernhardt Student Wellness Center for non-athletes, erected in 2013. “We have a leader like Brother Kevin who has this vision like ‘Oh, I’m going to make this the coolest school.’ He’s totally dedicated to the Marist Brothers and this school, that’s his life.”

Burrus sees the school’s Christian character in walking the halls, counseling freshmen and attending retreats. “You’ll see a lot of kids being kinder to one another,” he said. “They have a tendency to want to help each other out and that’s the purpose of having a Marist school, the spirituality.”

Nearby, students chatted with friends between classes in the central courtyard graced with palms and a statue of St. Champagnat while others talked quietly in the chapel.

Senior Ethan Gaunaurd said that he’s gradually grown in confidence through school engagement and spiritual support and now is president of student activities. “I was a lot less confident and outgoing, more introverted. Being involved in student activities has helped me to come out of that shell and feel like I’m now more of an extroverted person and more suited for leadership,” he said.

“Coming from a school like St. Theresa that already instilled a lot of Catholic values it was great to see how much more Columbus could offer to me,” he added, noting that Mass is celebrated at 7:30 every morning in the school’s chapel. 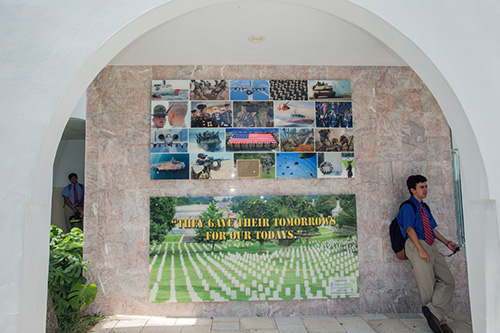 A Christopher Columbus student stands next to the military memorial wall at the Miami high school.

A legacy, Ethan discerned his Columbus destiny by preschool. “It’s good that we don’t have the distraction of girls because it really helps us to focus and educate ourselves,” he added. “It’s being with your brothers that you’ll remember for the rest of your life.”

This fall, alumni can return to campus for the annual memorial Mass for deceased alumni and the Veteran’s Day commemoration in the Patriot Plaza, naming alumni veterans. That roster of graduates includes three current CEOs of Fortune 500 companies.

About half of Columbus’ students come from public schools and 20 percent aren’t Catholic. Tuition is $10,500.

“There are levels of diversity all through,” Pugh said. “We’re doing great things for our community. That’s evident with the Silver Knights. We have more National Merit Scholars than ever in school history, which we’re very proud of.”

He noted that over 300 students obtain internships in the summer, mostly with the help of alumni. “Building career paths is very important and in looking toward the future that’s what we want to continue,” he said.

Above all, the school seeks to form students into responsible men on Gospel-enlightened career paths. “We have that right blend of faith and discipline and expectations and our teachers understand that they have to guide and mentor,” said Pugh.

With that enduring mission, Brother Kevin said he can confidently step down after 18 years as president. “The Catholic faith shows you how to deal with people, have compassion for people and try to help people â that’s why we’re here. And at Columbus our main mission is to help students not only to get a good education but to become good Christians.” 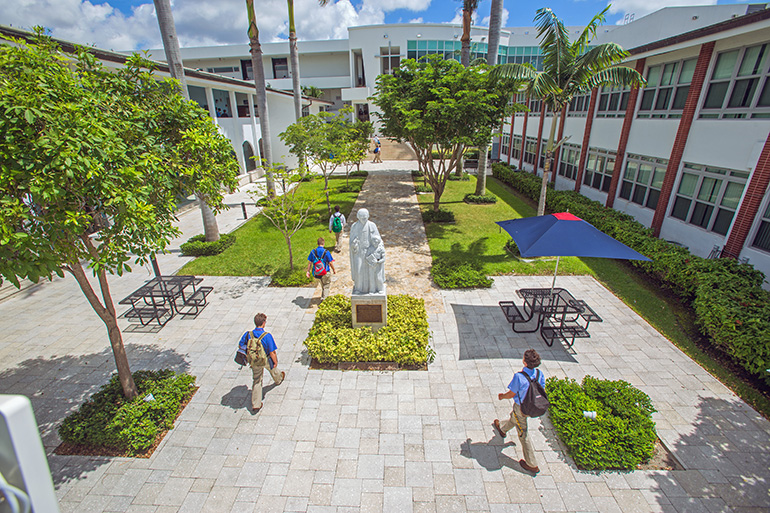 Students walk through the patio of Christopher Columbus High School in Miami, which is celebrating its 60th anniversary this year.