More than 190 hear Johnette Benkovic at Women of Grace conference 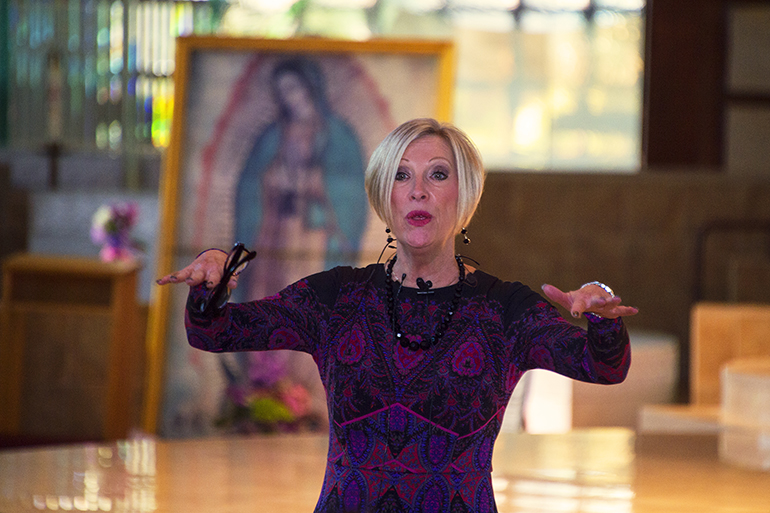 Johnnette S. Benkovic, founder of Women of Grace, speaks to women during the one-day conference at St. Mark Church in Southwest Ranches.

SOUTHWEST RANCHES | Johnette Benkovic, author and founder of Women of Grace, recently spoke to over 190 attendees, mostly women, about the true meaning of beauty. 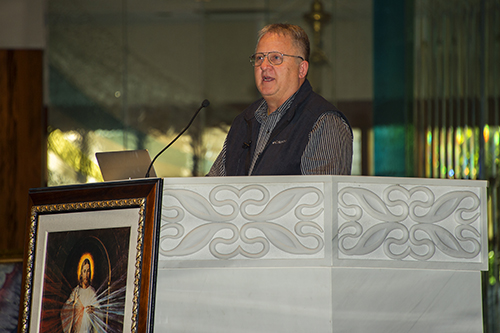 Thomas K. Sullivan tells listeners we are all "knighted by Christ" at baptism, during the Women of Grace one-day conference at St. Mark.

“Our contemporary culture extols youth. We live in an era of sculptured bodies, lifted faces, nipped and tucks in places,” said Benkovic at the “Infinite Mercy: Preparation for the Spiritual Battle” conference, hosted by Women of Grace and held Feb. 27 at St. Mark Parish in Southwest Ranches.

“The emphasis is all on the exterior, nothing in the interior, but real beauty, true beauty emanates from the inner recesses of the soul and that radiance is what makes a women truly beautiful,” Benkovic said.

Benkovic explained that we have very little understanding of what beauty is all about. She told of the time a professor and well known author, Peter Kreeft, was asked about his model of beauty. He replied that his super model was Mother Teresa of Kolkata.

By most people’s standards Mother Teresa would not be called Miss Universe, Benkovic said. She showed in her body the signs of her ministry of tending to the poor: her wrinkled face and hunched-over body; but “who could not look into her eyes and see spectacular beauty. You could capture a glimpse of the eternal.”

Eyes are the window of the soul, said Benkovic. People who met St. Pope John Paul II would always say there was something in the way he looked at you, something in his eyes, she noted as she walked around the pews of St. Mark parish connecting with her audience.

One of those attentively listening was Juliette Victoria, seated with her two sisters, her mother, her aunt and two nieces ages 17 and 14. Four generations of women attended the conference together.

“It was a very pure message,” Victoria said. “She really spoke to my soul. Especially, when she spoke about our notion of beauty.”

Victoria’s sister, Lili Todelo, especially liked when Benkovic spoke about “how important it is for us to give our fiat to the Lord like Mary did.”

Fourteen-year-old Karla said she was impressed with how as Catholics we need to communicate to others and have them “see the light of God in our eyes.”

Benkovic’s recent book, “Experience Grace in Abundance, Ten Strategies for Your Spiritual Life,” published by Sophia Institute Press, stresses God’s unconditional love for each person and the need for everyone to know his or her worth and value. 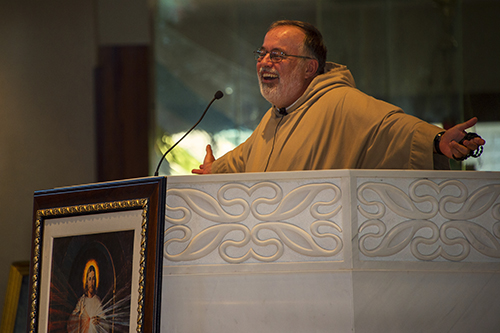 Father Philip Scott, of the Congregation of St. John, preaches the homily during the Mass that was celebrated during the one-day Women of Grace conference.

As part of the day’s agenda, Father Philip Scott, of the Congregation of St. John, celebrated Mass for those in attendance. In his homily, Father Scott spoke about the unconditional love of the father reflected in the Gospel reading of the day: the parable of the Prodigal Son.

Father Scott suggested it should be known as the parable of the Merciful Father. As a perfect example of God’s love, the priest recalled the faces of the women he had ministered to at a retreat for women who have gone through abortions.

“They look like the walking dead when they arrive and little by little the mercy of God dwells in them. They are strengthened up and by last day they are laughing. God is bringing them back to life,” Father Scott said.

Just like in the Gospel of the Prodigal Son, the father clothes him, cleans him and puts sandals on his son’s feet. “You are the delight of the father and there is no replacement for you. You are the only one for him,” Father Scott said.

Thomas Sullivan, who served in the U.S. military and has spent 25 years in Catholic evangelization, said our lives are a constant battle between good and evil. He gave a thoughtful explanation of the book of Revelation, on how it all started with the great battle in heaven between the angels, and how half of the angels rebelled.

“As a Catholic, you cannot understand the elements of our faith without understanding the big picture, 'the Kingdom of God here on earth' in which we live our faith out â the sacraments, prayer, commandments, etc.,” Sullivan said. “Without this big-picture understanding of the Kingdom, the teachings of the Church become an ocean of unrelated data with no cognitive meaning.

“I relate it to a jigsaw puzzle,” Sullivan continued. “When putting a jigsaw puzzle together, what is the first thing you need to assemble? You need the corners and the frame. Once you have this, putting all the pieces together, filling in the center, makes the entire puzzle come together and form a beautiful picture.”

Sullivan goes into further depth on this subject in his book, “Called to Knighthood: The Sacrament of Confirmation in the Kingdom Family of God,” published by Simon Peter Press.

Just like the nation of Israel in Old Testament times had warriors or soldiers who were bound to defend and spread the kingdom, so are each one of us. We are enlisted in the service through baptism and empowered through confirmation, Sullivan said.

“We are warrior men and women,” he reminded his listeners. “We are knighted in God’s Kingdom.”

Women of Grace is a Catholic apostolate for women founded in 2003. It inspires women through its many outreaches in radio, television programs, conferences, retreats and the Women of Grace study program. Its mission is to encourage every woman, using the Blessed Mother as an example, to discover how her feminine nature holds the key to real fulfillment and lasting peace. 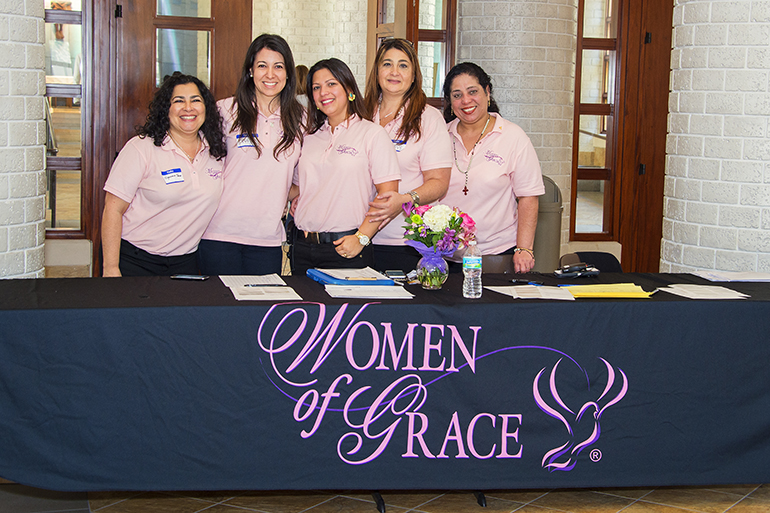