Four trips planned to papal stops, including one to Cuba for young adults 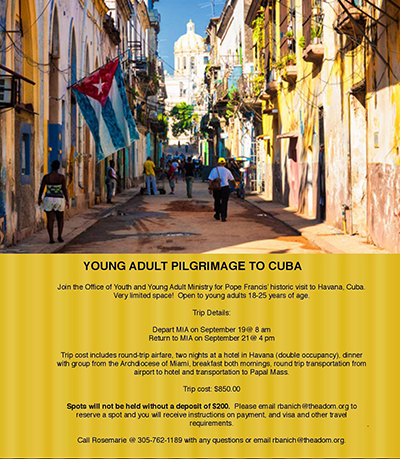 MIAMI | The phrase “pilgrim people” won’t be merely symbolic this September when referring to South Florida’s Catholics. The Archdiocese of Miami has planned four separate pilgrimages to stops along Pope Francis’ tour of Cuba and the United States.

Two groups will join him for the Mass in Havana Sept. 20; another group will see him in Washington, D.C., Sept. 23 and 24; and a fourth group will take part in the closing festivities of the World Meeting of Families the weekend of Sept. 26 and 27 in Philadelphia.

Despite a steep price tag â between $2,250 and $2,855 per person due in large part to the lack of hotel rooms in Cuba â only a few seats remain on the charter plane that will take nearly 150 people to Havana Sept. 18-21. Archbishop Thomas Wenski will lead that pilgrimage, whose tentative itinerary includes tours of Old Havana and Mass with the pope Sunday morning, Sept. 20. (See papal itinerary in U.S. here and in Cuba here.)

Very little time remains, however, for signing up for this pilgrimage, especially for people born in Cuba, whose visas take longer to process. Those interested should notify the archdiocese at 305-762-1104 before the end of July.

The Office of Youth and Young Adults has planned a much more affordable trip â costing $850 per person â for Sept. 19-21 for young people between the ages of 18 and 25. They, too, will stay in a Havana hotel and attend the Mass with Pope Francis.

“The price is phenomenal,” said Rosemarie Banich, director of the Youth and Young Adult Office. “I made connections in Havana with a young adult group and they’re eager to meet the young adults from Miami.”

The price differential between both pilgrimages is due to the hotel selection and the fact that the young adults will be flying on a regularly scheduled flight rather than a charter.

Unfortunately, “no young adults have signed up” for the pilgrimage, which could accommodate up to 40 people, Banich said. A go or no-go decision will have to be made by the end of July.

A planned young adult pilgrimage to Philadelphia also had to be canceled for lack of interest.

“That was truly the price point,” said Banich. “There are (young) people going” to Philadelphia from Miami, but they are staying in the houses of people they know because “the cost of lodging was really prohibitive.”

The week-long pilgrimage to Philadelphia, planned by the Office of Parish Life and Evangelization, also was scrapped. Many of those who expressed an interest in traveling that week chose to go on the Cuba pilgrimage after the pope announced he would be stopping there before coming to the U.S.

But the most affordable pilgrimage, the bus trip to Washington, D.C., Sept. 22-25, will be taking place, and registration will remain open until all the seats on the bus â or hotel rooms â are filled, whichever comes first. That trip is priced at $360/person double occupancy, or $425 for singles.

It includes an overnight bus ride to Washington, D.C., one night’s hotel stay, a tour of the capital and attendance at the Mass where Pope Francis will beatify Father Junipero Serra.

The word right now is that the Mass will take place on the grounds â not inside â the National Basilica of the Shrine of the Immaculate Conception, which is located on the campus of Catholic University. Bus pilgrims also will have a chance to hear the pope speak to Congress, since an outdoor viewing area will be set up outside the U.S. Capitol building.

Although the registration deadline has passed, hotel rooms remain for the Sept. 25-28 weekend pilgrimage to Philadelphia. That trip â originally priced at $1,464/double occupancy or $2,224 for singles â includes three nights at a hotel and attendance at both the closing festival Saturday night and the closing Mass Sunday afternoon.

Those interested at this point must contact Dube Travel directly, however. The final cost of the trip will depend on the varying costs of a flight.

Archbishop Wenski is hoping to join those pilgrims at some point during their stay. Unfortunately, many final details of the pope’s itinerary in the U.S. remain to be worked out.

Although the price point is high for a weekend in Philadelphia, the archdiocese struck the best deal it could given the lack of hotel rooms in the city and the popularity of Pope Francis.

“The cost is the cost,” said Banich. “However, many people are going to be staying in the way-out suburbs of Philadelphia, even in New Jersey and Delaware. A big shining light in our pilgrimage is that our hotel, while modest, is very well situated. We’re literally across the street from the train station, one stop away from the airport and two stops away from the exit to Benjamin Franklin Parkway (site of the closing festival and Mass).”

The walk from the train to the Mass site is approximately a mile and a half.

She added that all the trips â to Cuba, Philadelphia and Washington â “I think are going to be incredible in their own way.”

“To be in Cuba with the Holy Father and Archbishop Wenski â¦ at this juncture in Cuban history is a once in a lifetime opportunity,” Banich said. “Philadelphia and Washington D.C. are historic in their own way. We don’t know if or when Pope Francis will be back in the U.S. This could be the only time.” 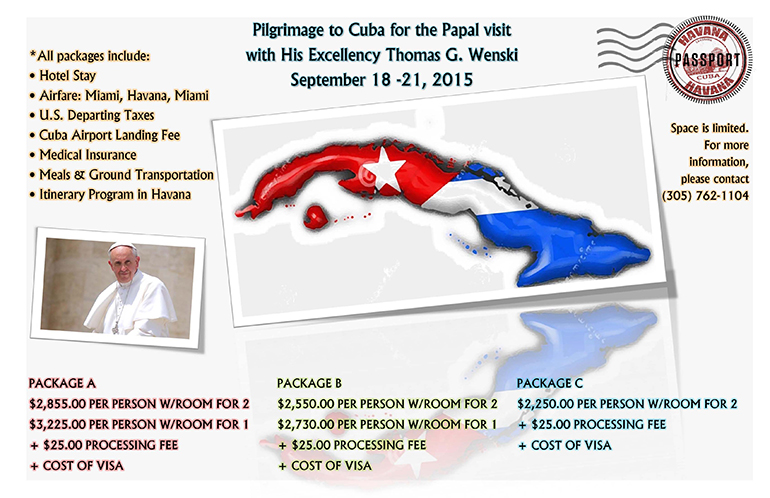