For Congress: Belen versus Belen 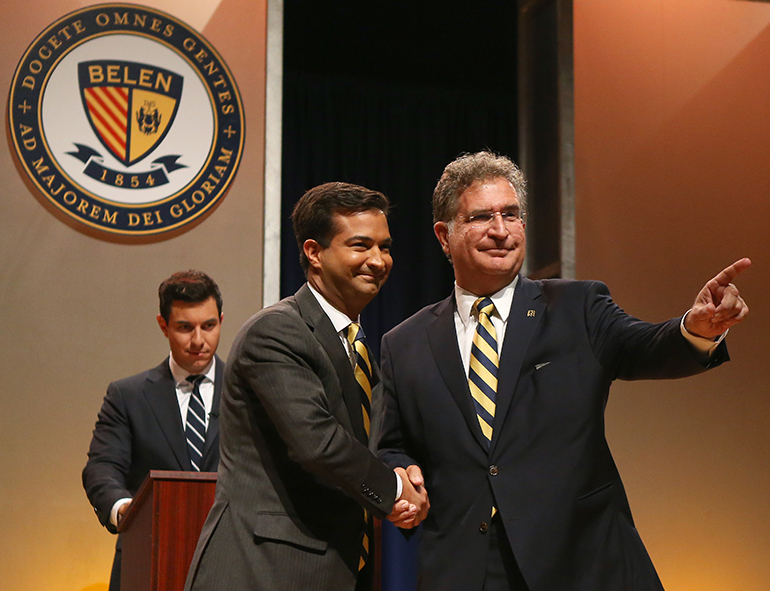 US Representative Carlos Curbelo (R-Fla), left, shakes hands with his opponent, Democrat challenger Jose Garcia, before the start of the debate at their alma mater, Belen Jesuit Preparatory School in Miami.

MIAMI | In between the presidential debates, Belen Jesuit Prep hosted a Congressional one, pitting Rep. Carlos Curbelo versus challenger Joe Garcia, and moderated by ABC journalist Tom Llamas. But for this sacred rite of truth-seeking, the three men’s top credential was having graduated from Belen â and passing the American government class taught by Patrick Collins.

The 46-year teacher was seated near the front row of the school’s Roca Theater at the Oct. 13 debate, surrounded by students from eighth grade civics and 11th grade government classes as well as seniors and supporters of South Florida’s 26th district candidates. 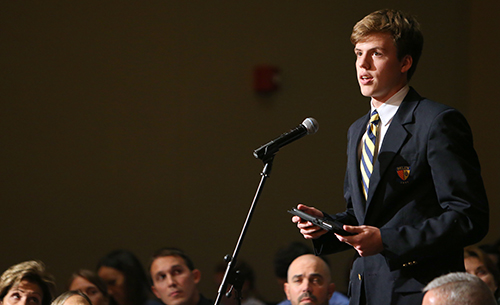 Garcia, a Democrat and ’82 Belen grad, was fighting to reclaim his old job. He served as U.S. representative from 2012-14 before being defeated by Republican Curbelo, a ’98 grad. Both sporting the school’s yellow and navy tie, they fielded questions from Llamas (class of ’97) and Belen students.

Journalist-for-a-day George Miro-Quesada, a senior, was pleased with his assigned topic of Cuba, as an “unbiased” son of Peruvian and Dominican immigrants. After an afternoon coaching session at school, he was ready to roll.

“It shows Belen is limitless what it can offer, what you can learn, how you can take that anywhere. Rarely do you ever hear about two candidates running for the same seat from the same school. It’s mind blowing!”

“It is nothing short of miraculous that a school that was banished by a dictatorship just two generations ago has by the grace of God flourished, assimilated and taken roles of leadership in American government,” he said. “The Belen Jesuit mission to serve others continues in the pursuit of representing South Florida in the legislative branch of the U.S. government.” 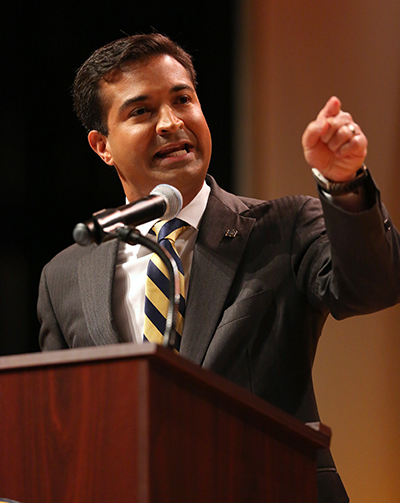 A 1997 graduate, Llamas declared that the race was “one of the most competitive” in the country, as Republicans aim to keep control of the House of Representatives. Asking the audience to hold their applause, Llamas warned that “we have detention slips and we will use them!”

Curbelo and Garcia first thanked Belen for the education that shaped their call to public service. Garcia joked that in his day they never lost a home game because “we didn’t even have a home field.”

He added: “I think the only Belen graduate that Patrick Collins hasn’t taught is Fidel Castro. The values that he instilled in each and every one of us, that commonality that we share, his knowledge of our community, our country, and what being a man for others is, and that intersection with public life, is something that made me choose this most un-lucrative of careers. But it certainly has brought tremendous blessings.”

Curbelo said his parents forced to him to switch reluctantly from public school to Belen, where he was elected student body president.

“Every day I think back to something I learned at Belen and I apply it to my life, my public life. I try to live the values I learned here â integrity, respect, decency,” he said.

Getting down to battle, Curbelo said he decided long ago not to vote for Donald Trump out of principle while Garcia countered that Clinton “is the most qualified person who has run for president in my lifetime.”

Curbelo accused Garcia of running “one of the most corrupt campaigns in the history of this community” while Garcia criticized Curbelo’s weak voting record. 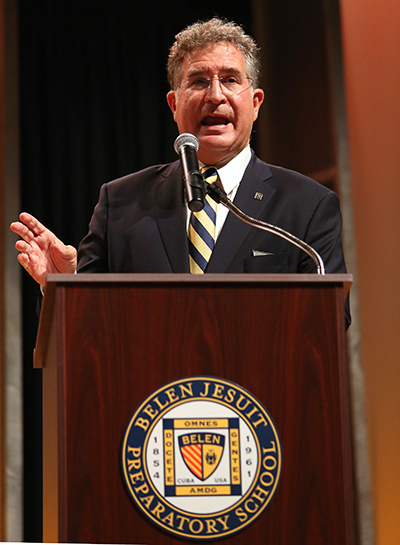 Democrat challenger Jose Garcia responds to questions from moderator from ABC News anchor and correspondent, Tom Llamas, during a debate against US Representative Carlos Curbelo (R-Fla) at their alma mater.

Curbelo proudly reported the legislation has 128 cosponsors. “There are people living in Cuba receiving refugee benefits from the United States. This is an abuse of the generosity of this great country and because we are a grateful community we reject this type of abuse,” he said, noting that arrivals before the 1980 Refugee Education Assistance Act didn’t receive such benefits.

Garcia countered that Curbelo had forgotten his roots.

“We have received a lot of benefits and it’s one of the reasons we’ve been so successful,” he said. “I find it difficult that a Cuban American would want to take away from these people who come looking for the same things that my grandfather sought.”

Garcia stressed improvements in Cuba as a result of the re-establishment of diplomatic relations with the U.S. He cited the empowerment of dissidents and “explosion of civil society.”

Senior Kevin Lemus asked about the candidates’ response to the Brookings Institution ranking Miami as eight nationwide in income inequality.

Curbelo said he took action on infrastructure. “One of our greatest achievements this Congress is a long term highway bill that includes $10 billion in infrastructure, funding that will put people to work.” 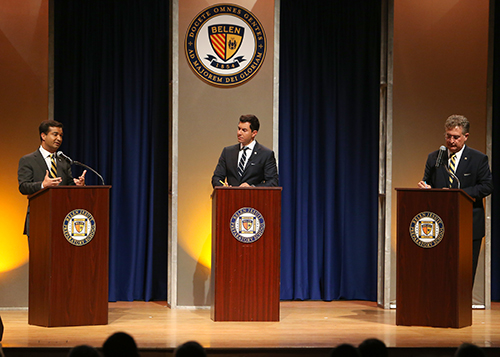 US Representative Carlos Curbelo (R-Fla), left, responds to questions from ABC News anchor and correspondent, Tom Llamas, during a debate against Democrat challenger Jose Garcia at their alma mater.

For the “attack free zone” finale, Curbelo said that he and Garcia actually have a longstanding, friendly relationship. “We can have vigorous debates, we can accentuate our differences but after the election we really have to come together.”

As for Garcia, “I am a Democrat because I am Roman Catholic and believe it is each and every one of us that has to (take) responsibility to act in (the people’s) interest, and every day we take a stand not only for ourselves but for those who do not have power to do it.”

Afterwards, a beaming Collins withheld any debate grades but said the men definitely fulfilled his teaching mission in their service to democracy, campaigning for ideas and challenging each other.

He remembered the candidates as politically engaged and “fascinated by government.” As students, both candidates and Llamas joined him in D.C. for the Close Up civics education program.

“I’m very proud, very happy with the questions the students asked and very happy that we were able to experience first-hand a debate of this magnitude. Both candidates represented Belen very well,” he said. “One of the things we strive for here is to produce men for others who are committed to social justice and are committed to being Catholic leaders.”

As for his own voting record, he’s glad to live in the 27th district, represented by Rep. Ileana Ros-Lehtinen. “It keeps it easier with alumni get-togethers,” he said.

Eighth grader Nicolas Hidalgo recalled the “surreal,” nerve-wracking experience of having candidates answer the question “burning on my mind for a couple weeks” about NFL quarterback Colin Kaepernick’s kneeling during the National Anthem to protest police brutality against African Americans.

Hidalgo himself concluded that the NFL player “was kneeling during the National Anthem not to be disrespectful. It’s more to get awareness, to get support to his cause,” he said.

He added that he felt honored to represent Belen.

“The candidates to me are living proof that the values and morals in Belen can pass on to the professional field and serve me in whatever endeavors I'm in,” he said. “As a Catholic the least we can do is serve our community. And it doesn't have to be something big but in anything we do we always have to follow Belen's motto, ‘for the greater glory of God.’”