Visiting priest sees his disability as an asset to his ministry 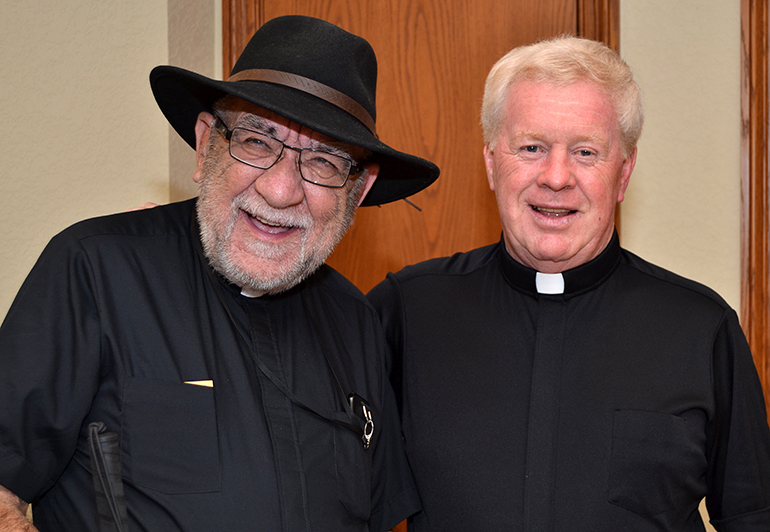 DAVIE | Father Pat Martin has been blind for more than six decades. He wouldn't have it any other way.

"I wouldn’t pray for a cure for my eyes any more than you would pray for blindness," Father Martin, 72, said after preaching an introduction to a two-day mission at St. Bonaventure Church. "My ministry wouldn't be what it is today."

It's hard to argue with that. The San Antonio resident has led 1,200 such missions since 1980, including three for this Lenten season in the Archdiocese of Miami. His hallmark, both in homilies and in confession, is reassuring people of God's love. 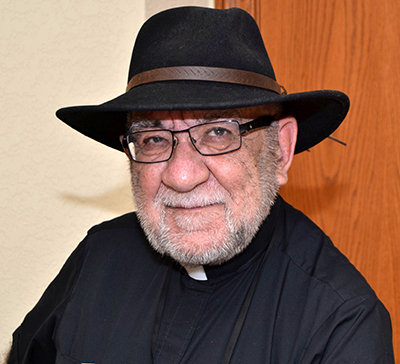 And people respond: They flock to his missions, read his books, listen to his CDs and wait for hours to see him in confession.

"We're groupies," said a grinning Rich Bertucci, who came to St. Bonaventure after attending Father Martin's missions at St. Gabriel in Pompano Beach and St. Pius X in Fort Lauderdale. "He goes around talking about how much God loves you."

His wife, Roni, agreed. "I love to listen to him. His words capture so much hope and love."

This was Father Martin's seventh mission at St. Bonaventure, said Father Edmond Prendergast, the pastor. "He tells the story of his life â it's real," he said. "People have a great need to know that God still loves us."

About 500 people attended the recent Vigil Mass, where Father Martin preached about how God makes things possible when the world says they're not.

"God has called each of us to witness to his love in our own lives," he said, amplifying his talk with sweeping gestures and dramatic vocal inflections. "Each of us is called to look at what God has done for us and tell the world about it." 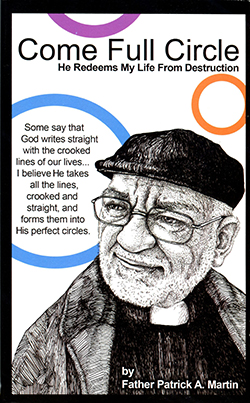 One of six books by Father Pat Martin, who preached a mission at St. Bonaventure Church, Davie, in March. 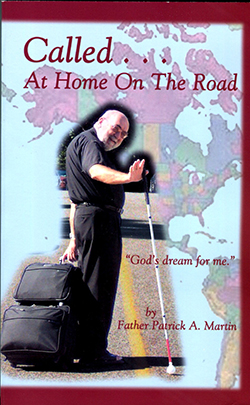 One of six books by Father Pat Martin, who preached a mission at St. Bonaventure Church, Davie, in March.

Exhibit A was his own life, starting with his upbringing in Limestone, Maine. At 9, he came down with tubercular meningitis and fell into a coma.

"He'll never come out of it, let him die," his doctors said. But after three and a half months, he did awaken.

When he was released from the hospital, he was crippled and blind, but his enormous family of 10 brothers and 11 sisters taught him to walk again. And when his hometown wanted to send him to a school for the blind in Boston, 500 miles away, his family found a public-school teacher to tutor him at home.

"Imagine, I was a fourth-grade kid when she taught me to memorize things â including the Baltimore Catechism," he said.

His pastor asked him to become an altar server, figuring that if he could memorize the catechism, he could learn to serve during Mass.

He went on to found a ministry for the handicapped in the Diocese of Norwich, Conn. And in 1977, Bishop Daniel Patrick Reilly obtained an indult, or special permission, from Pope Paul VI for him be ordained a priest.

"Look at how (God) has turned upside-down all the world's can'ts," Father Martin told the St. Bonaventure congregation.

He suffered another crisis in 2013, when a sciatic attack ate holes in his stomach. In one month, internal bleeding consumed 32 bags of blood, Father Martin said.

At first, doctors said he would never sit up or walk again; then they called his family, believing that "they'd be going to my funeral soon," Father Martin said.

Instead, a sister took him to her home town of San Antonio. He eventually went from a hospital bed to a walker to walking unattended.

"With God, all things are possible," Father Martin said. "He loves to prove the world wrong."

Even his devotional life hasn't been halted by his blindness, he said, relating a story from a retreat in 1977. That’s when he was inspired to write a hymn, "He Loves Me." He then sang the him in his rich baritone voice for the St. Bonaventure congregation â all six verses â with some of the listeners singing along.

Father Martin summed up: "When I look at all that God has done, and continues to do, how could I not speak of God's love?"

He urged his listeners to do the same, as part of Pope Francis' New Evangelization. "Tell what God, in all his goodness, has done for you."

He also urged people to come to his other signature gesture: confession, which he scheduled for three hours each of the two days of the mission. He added a quip: "If you’ve been waiting for confession with someone besides Father Ed, this is your lucky day!" â drawing laughs.

Rich Bertucci, one of the avowed groupies, said people often wait hours for confession with Father Martin. "He gives it to you straight. He doesn't pull punches. But then he embraces and forgives, and you leave with a peaceful feeling."

In an interview after the Mass, Father Martin reflected on how his ministry has grown despite his limitations â and in some ways, because of them. He offered one parable on how his blindness made a difference in his ministry.

He was invited to speak at a school for the blind, and a driver picked him up. On the way, she poured out her heart to him about her life. "She did 40 years of confession. If I weren’t blind, I would have driven myself there, and that wouldn't have happened."

Besides Florida, Father Martin has ministered in 40 states and 10 Canadian provinces, plus Ireland, Northern Ireland and Panama â all on invitation. He has also written six books and recorded 44 mission messages. All are available on his website, awildcanary.com

With an itinerary scheduled by Patricia Kozar, one of his 11 sisters, Father Martin goes on missions every week or two. But he'll spend more than three weeks in April on various missions around Ireland.

He also plans his third pilgrimage to the Holy Land just after Easter 2016, a trip sponsored by the Pilgrim Center of Hope in the San Antonio Diocese.

Through it all, he takes his own advice about trusting God.

"I have a cane and two hearing aids, and I have trouble with balance," Father Martin said. "Yet he keeps using me.

"When I think of all God has done with this broken life, who am I to worry about tomorrow?"