DAVIE - In gratitude for the gifts received from God and the community, a 12-year-old piano virtuoso will launch a volunteer music program to perform at charitable events across south Florida.

Coniglio began to play piano shortly after being diagnosed with Type 1 diabetes in March 2006.

"In only three years, I went from not playing a single note or reading music, to winning second in the state of Florida," explained the young musician. "Everyone says that I have a special gift, that it is a miracle that I have progressed so quickly. I recognize that my talent is a gift from God; it is more about what God has done for me than what I have achieved."

In gratitude, he initiated the program to give back to the community.

"God gave me this gift of music at the most difficult time in my life. I am grateful for what I have been given and now want to share it with others," he said.

Since Christmas is known as a season of giving, he thought it would be the perfect time to officially launch the Music for Smiles program, and schedule himself and other local musicians to perform at charitable events, nursing homes and assisted living facilities across south Florida. Several musicians have already committed to join him.

Mark Cahen, director of St. John's Rehabilitation Hospital and Nursing Center in Lauderdale Lakes, said that one of the patients loves the music of Tchaikovsky. Cahen asked Coniglio to play a piece by the Russian composer, which the young pianist agreed to do.

"We are all excited about hearing him play and look forward to seeing a lot of smiles in the room," said Cahen.

"My reward is a receiving a smile from the audience and this is why I called the program 'Music for Smiles'," said Coniglio. "My first piano was given to me by my music teacher at school and a generous couple in Alabama gave me a brand new Yamaha U1 upright piano three months ago, so that I could better excel in my technique and playing. I am so grateful for their generosity and want to give generously back to others."

The young musician excels in both arts and academics at St. Mark's. He is currently enrolled in Archbishop McCarthy High School's Smart Start Math Program and in Duke University's Talent Identification Program.

Anthony Coniglio will officially launch his program on Friday, Dec. 4 at the following locations:
- 12:30 p.m.: St. Joseph's Residence, 3485 N.W. 30 Street, Lauderdale Lakes
-  3:00 p.m.: St. John's Rehabilitation Hospital and Nursing Center, 3075 N.W. 35 Ave, Lauderdale Lakes
A selection of his piano performances can be viewed at 'grandpiano9' on YouTube (http://www.youtube.com/watch?v=TILtr2-_aZ8), including his recent performance at Lynn University's Friends of the Conservatory Concert and Tea.

For more information, or to inquire about scheduling Anthony Coniglio for an event, contact Gail Coniglio at [email protected], or call 954-723-0336. 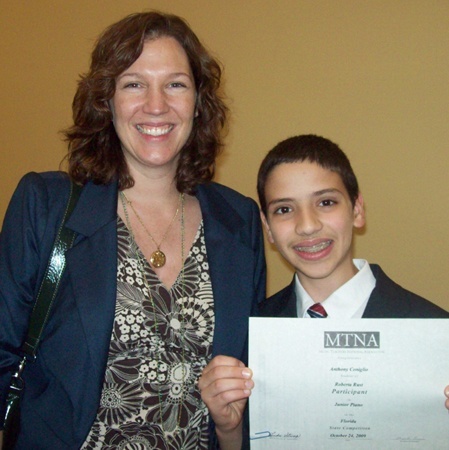 Florida Music Teacher's National Association (MTNA) Junior Piano Competition Winner, Anthony Coniglio, with Lisa Leonard of Lynn University's Conservatory of Music, who was one of the judge for this competition and serves as Corresponding Secretary for the Florida State Music Teachers Association.