Leaning on faith while dealing with trauma

CORAL GABLES | As a rookie firefighter, Robert Hevia entered a small apartment in Little Havana 24 years ago to find an elderly Cuban immigrant who had hung himself after his wife’s death. Hevia carried the man’s tragic death in his heart while facing countless other traumatic incidents, from people falling from planes to getting shot in the head. His vocation ultimately led him on a deeper spiritual search and in 2020 he joined the Catholic Church.

“Literally every time you go to work you’re going to see people at their worst, people in accidents and in pain, people murdering. If you don’t have a good grasp of faith, it can really beat you down over the course of your career,” said Hevia, deputy fire chief for Miami Fire & Rescue. 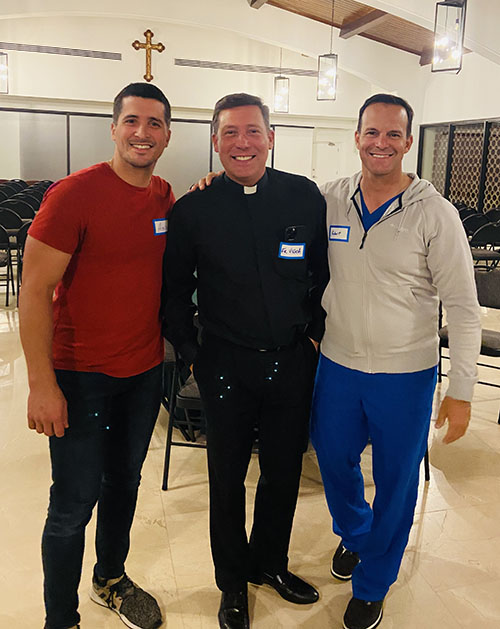 Asis Lopez, left, and Robert Hevia, both firefighters and co-leaders of Frontline Ministry, pose with Father Richard Vigoa, pastor of St. Augustine Parish in Coral Gables, before the first meeting of Frontline Ministry, which seeks to provide fellowship and Catholic formation to badge-wearing first responders serving across Miami-Dade County, be they military, firefighters, police officers or public safety telecommunicators.

“So faith in our careers is a beautiful gift to have that God has given us,” he added. “Now I have such a greater appreciation of my career. I’ve always loved going to work and being a firefighter but I really feel that there’s a service to God in every occupation.”

Sharing that message with the Miami Archdiocese, Hevia and Miami-Dade firefighter Asís López welcomed public servants to an inaugural Frontline Ministry meeting in August at St. Augustine Church in Coral Gables. The ministry seeks to provide fellowship and Catholic formation to badge-wearing first responders serving across Miami-Dade County, men and women who risk their lives in dangerous and demanding emergencies as military, firefighters, police officers and public safety telecommunicators.

The goal is to help them to lean on God’s strength and live on mission for Christ on the front lines. Another goal is to create a dedicated RCIA track for those exploring Catholicism.

Participants at that first meeting included a University of Miami police officer, Coast Guard official, retired Army special deployment officer and several firefighters who all seemed uplifted to gather at church with others who understood their work. Participants broke into small groups and discussed the first segment of “The Search” video series, then heard a testimony.

Father Richard Vigoa, pastor of St. Augustine, hopes the ministry will provide a safe space for frontline workers to find spiritual resources and grow in knowledge of Catholicism.

“They can find a lot of peace and comfort in coming to understand God’s love for them,” he said. “In RCIA we had three firefighters. It was there we discovered this was a demographic that is untapped and needs attention and support.”

Also a cardiology nurse practitioner, Hevia used to work for the cardiologist Glenn Barquet, who witnessed to his faith through humble example. The two became close friends and discussed spiritual books. The cardiologist died at age 50 from COVID-19 in May 2020, the same year Hevia entered the Church.

After going through RCIA, Hevia envisioned a ministry for first responders. “I started questioning who am I to start a ministry, how would I even do that? I’m a recent Catholic. There’s someone much more qualified and I delayed and delayed,” he recalled. “After Glenn died, I went on a retreat to Peru serving the poorest of the poor and praying every day. I felt this calling to help other people and I didn’t have to go to the mountains of Peru to help other people. I can help people right here that are closest to me.”

Since then, Hevia has served as confirmation sponsor for two colleagues, a former Mormon and someone unaffiliated with any faith. His deepest hope is to reach people beyond church.

“I want to bring people to the churches to introduce them to Christ and the Holy Spirit so when they’re having a difficult time in their life, they have their faith to lean on, so they can have a compass in their life,” he said. “This goes back to my experience with Glenn about faith formation and understanding what the Church is teaching and the Bible. What is our purpose in life? Through that understanding it leads to happiness and joy and a more fruitful life.”

His co-leader, López, 34, also made a big decision to explore his own faith after his father died of cancer 10 years ago. Then, in 2020, he experienced personal trauma when his infant son went into cardiac arrest, and he had to give him CPR before he died. The tragedy led him to join fire rescue and dedicate his life to help others. 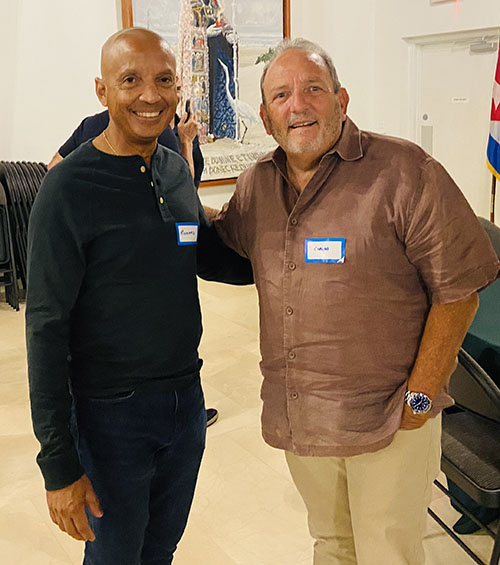 University of Miami police officer Richard Williams, left, and Carlos Sotomayor chat at the first meeting of Frontline Ministry, this past August, at St. Augustine Church in Coral Gables. The ministry seeks to provide fellowship and Catholic formation to badge-wearing first responders serving across Miami-Dade County, be they military, firefighters, police officers or public safety telecommunicators.

“One of the firefighters told me that if you’d not done what you did he would have never made it to the hospital where he ended up passing away. Something clicked in my heart. This new career was kind of born and God made it clear very quickly not only in my desire but that my natural gifts would be suited well in this,” López said.

López has found that firefighters’ sense of community is very strong but can be distorted.

“With the trauma they’re exposed to on a regular basis you start to build walls around your heart and get farther and farther away from that initial desire to help people. And it just kind of becomes a job and something that also becomes our identity,” he reflected. “We’re firefighters first but we’re sons and daughters of God first, called to this, to help people.”

“What we’re trying to do is bring something more of a Christ-centered brother and sisterhood, like willing the good of the other, not necessarily covering up something bad because he’s my brother,” López added.

Retired military participant Al Pérez served active duty in Army combat deployments and now serves in civilian Special Operations Command South. He answers the call to duty through Frontline Ministry. “I think we’re an extremely underserved community. You see a lot of stress, a lot of trauma. We’re not taking care of ourselves. You’ve got to minister to each other and help each other.”

Studying the Bible and catechism and praying have guided and strengthened him, Pérez said. “That’s helped me and I just want to help share that with other people.”

Firefighter Carlos Pereira said he is also grateful for the new group as he approaches retirement. “I had four (firefighter) friends commit suicide within two years of retirement. I don’t have anxiety yet but I’m starting to feel like ‘what am I going to do after this?’ I’ve been doing this like 39 years. I guess it’s called separation anxiety,” he said. “I’m going to need a support group and why not start it now. I’m a believer in God.”

Pereira said his faith deepened after his mother passed away. “She was my closest friend. Even though I was blessed to have a great father I was closer to my mom and since then I pray every day. It puts me at ease,” he continued. “A lot of the guys who retired they say they missed the guys, the camaraderie, the brotherhood. That’s why I’m here.”

Miami Beach firefighter Miles Rico noted that the Knights of Malta rescued people during the Crusades. To cope with job distress, he grabs his surfboard and rides the waves while remembering “the suffering people have gone through around the world.”

“There are always people who have it worse. When you hit that wall, when it’s not enough, you go into prayer and look for that deeper meaning with God,” Rico said. “Anytime you can have more outlets for individuals to grow close to God and express themselves, it’s always a benefit.”