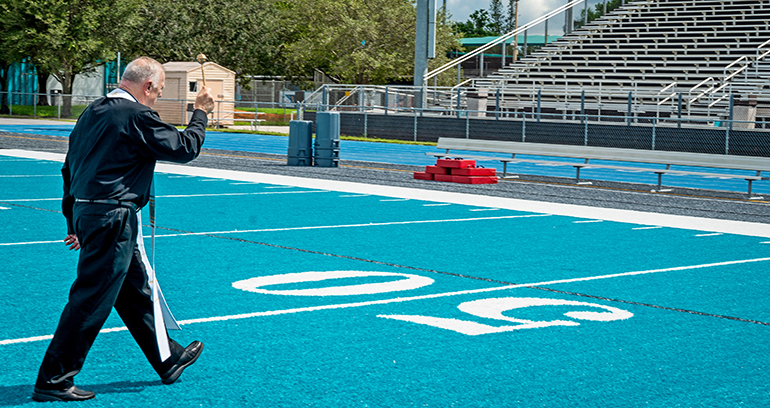 SOUTHWEST RANCHES | It wasn't a big holiday, but students at Archbishop Edward A. McCarthy High School got a big gift on Sept. 6, 2022: a bright new blue athletic field.

The multi-use field, carpeted in synthetic turf, will provide footing for several teams – not only football but soccer, lacrosse and flag football. Unlike the previous natural grass, the new field will stand up to constant use with less maintenance, according to Principal Richard Jean.

“This new field helps raise athletics to another level,” said Jean, who has led the school for 21 years. “From the beginning to the end of the year, the students will have a great field to play on.”

During the dedication, part of the school’s 25th anniversary observance, Archbishop Thomas Wenski paced the field, sprinkling holy water onto the surface bearing the school colors of teal, black and silver. The blessing followed Mass, which he celebrated at the school’s chapel. 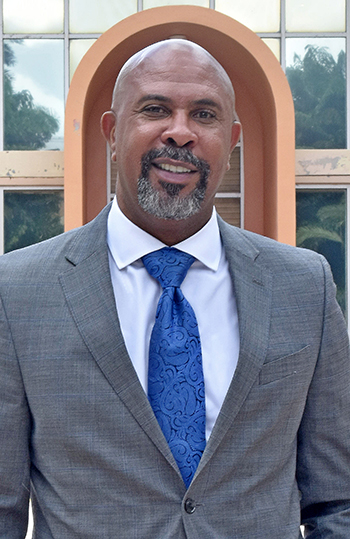 With Jesus, Mary and saints looking on from stained-glass windows, the archbishop told students that high school is a “great adventure” and an opportunity to find a purpose in life.

“God’s plan is for us to love as Jesus did,” he said in his homily. “To work out the details ... requires the same discipline needed to excel in a language or a sport.”

He concluded: “Don’t miss out on this great adventure of being not just a student at a great school, but also of being a disciple of the one who is the reason this school exists for you: Jesus Christ.”

With total seating capacity of 4,600, the field cost $1.4 million, Principal Jean said. He called it a “bargain” because synthetic turf needs less maintenance than grass.

The design will also stay drier, with a drainage system several feet under the surface, channeling rainwater to the school’s pond. Previously, puddles made for a muddy field, hard to run on and posing a hazard for knee injuries.

Donations for the project came from the Jordan Family Foundation, Cleveland Clinic of Florida, and families of the students.

Jean said the new field will encourage more students to try field sports. He said that 40-50% of McCarthy High’s 1,758 students have never played football before.

He added that sports plug firmly into McCarthy High values. Sports “help students compete in an environment that isn't real. They know it’s just a game, (but) it challenges them to get better and brings out their leadership qualities.”

Despite the outlay for sports, Jean said he constantly stresses the Catholic identity of McCarthy High. “We constantly teach them how to live as good Christians. We’re always asking, are we helping? Are we serving the community?”

He spreads the word every year to other school principals in the archdiocese, he added. “They hold the key to their schools’ identity. If they don’t set their identity as a school, someone else is creating it.”