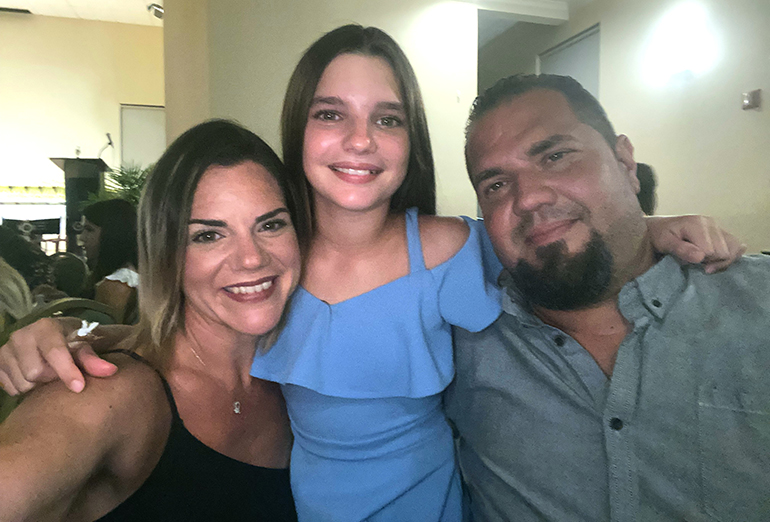 Jacqueline Mastrangelo, left, a graduate of Archbishop McCarthy High School, with her husband, Anthony, and their daughter, Gianna.

SOUTHWEST RANCHES | If one person could be the quintessential graduate of Archbishop Edward A. McCarthy High School, Mahogani Chery would be a good candidate. During her four years there, she seemed everywhere: track, drama, debate, softball, cheerleading, newspaper, liturgy club, student government. 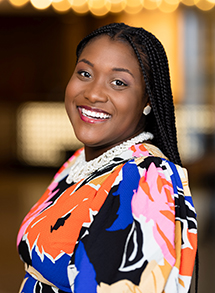 “There were limitless opportunities,” said Chery, who attended from 1999 to 2003. “You could aspire to whatever you wanted to be.”

As McCarthy High looks toward its 25th anniversary, its alumni reminisced about how the school shaped and supported them. Whether music or debate, math or liturgy, they gave high scores to their alma mater.

The school’s many facets will be showcased at the main celebration, a gala on Jan. 20, 2023, at the Ritz-Carlton Hotel in Fort Lauderdale. Featured will be not only dancing and an auction, but performances from the student arts programs.

McCarthy this year is also resuming parish visits, in which eighth-graders from area parochial schools check out the school for a day. They get to see the school’s science and robotics labs, as well as music, theater and other classes.

Among its honors, McCarthy High has been named a School of Excellence by the Catholic High School Honor Roll. In 2013, the magazine Today’s Catholic Teacher chose McCarthy as one of 12 schools for its Innovations in Catholic Education Awards. In 2015, it was named an Apple Distinguished School for its use of technology in education.

Chery said McCarthy’s advanced classes helped her at the University of Florida, where she studied mass communications, cultural anthropology and political science. She then handled corporate communications for several firms before her current job, running the diversity program at a South Florida company.

As a member of the second graduating class at McCarthy, Chery and her friends took part in the dedication of several buildings at the school, including the gym, the chapel and the first football field. Looking back, she views it as “being part of history. We were trailblazers, whatever we did.”

She still keeps in touch with staff at McCarthy High. She's donated to the school, and she attends a sporting event every year.

“I met incredible people there, and friends that I still have today,” Chery said. “It was a great experience.” 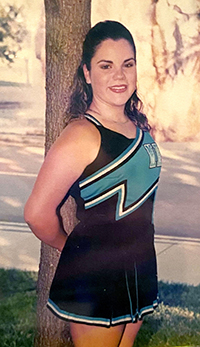 Jacqueline Mastrangelo as a cheerleader at Archbishop McCarthy High School, where she graduated in 2003.

She and others at the school made Jackie Mastrangelo feel at home when she arrived from Miami in 1999. She was the first to befriend Mastrangelo, but not the last.

“Everyone was so welcoming, including the teachers,” said Mastrangelo, a Plantation resident who attends St. Bonaventure Church in Davie. “I remember making amazing friendships.”

Mastrangelo plunged into school life along with Chery: dance, cheerleading, liturgy club. She also served as a “student ambassador,” a kind of docent for visitors and new students.

“My fondest memories of being young were my high school years,” Mastrangelo said. “I think we all felt that way. We spent so much time at school, it felt like a second home.”

After high school, Mastrangelo earned a master’s degree with the online American College of Education. She's been principal of a private school in Miami-Dade since 2011.

She credits McCarthy High with preparing her for college and professional life. “A huge part of what I became is from my high school years.” 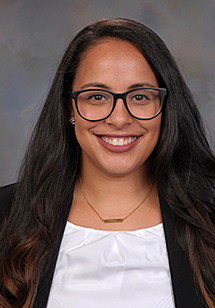 Dr. Catherine Cepeda likewise found a diverse atmosphere at McCarthy High. She joined a range of clubs, from chess to drama. But she found a lifelong love interest at science class.

“My teacher made science amazing, fun, easy, enjoyable,” said Dr. Cepeda, an ob-gyn doctor in Hollywood. “And my dad brought me up to believe in helping people. McCarthy High supplemented that, and I made a life of it.”

From McCarthy, she went on to Florida International University, then got her doctorate at Rutgers Medical School. She worked four years at Maimonides Medical Center in Brooklyn before returning to South Florida this past June.

No two students benefitted more at McCarthy High than Kara and Myranda Schroeder. In 2011, their father died of brain cancer, throwing their family into grief, depression and financial crisis.

“It was like a piece of me was ripped away,” recalled Kara, three years ahead of Myranda. “I would not have graduated if it weren't for Archbishop McCarthy High.” 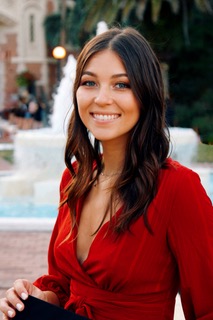 Myranda Schroeder says staff and teachers at Archbishop McCarthy High helped her and her sister, Kara, stay in school and graduate after the death of their father.

School staff and faculty helped in several ways. They gave Kara a couple of weeks off to adjust to her shaken world. They gave Myranda special tasks out of class when she felt overwhelmed. They provided tutoring, which Kara now regards as a kind of therapy.

They even waived part of the girls’ tuition to allow them to stay in school. That gesture launched a scholarship fund, the Schroeder Memorial Foundation, which still benefits students who lost one or more parents. Funds for the foundation are raised by the school’s annual golf tournament, set for March 27 next year at the Trump National Hotel in Doral.

The Schroeder sisters turned the anguish of their loss into good for others. Myranda began shepherding other students in McCarthy’s Peer Ministry. She's now working toward a master’s degree in clinical and counseling psychology at Nova Southeastern University.

“McCarthy High was truly a blessing,” Myranda said. “The staff and teachers were instruments of healing in my life.”

Sister Kara is also studying for a doctorate in psychology at NSU, with an eye toward helping children in stressful health situations. She shares Myranda’s gratitude for her time at McCarthy High.

“It has a lot of staff members with really big hearts,” Kara said. “I felt the Spirit was present in what they gave me.” 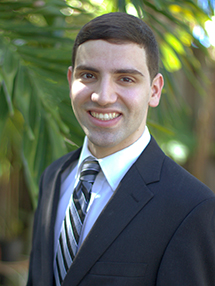 Anthony Coniglio says the math program at Archbishop McCarthy High School gave him a head start on his education in physics.

For Anthony Coniglio, intellectual grounding was one of the best parts of McCarthy High. While in middle school at neighboring St. Mark’s, he attended the morning Jump Start math program at the high school. Then took college-level math as a freshman.

Although he homeschooled after a year at McCarthy, his instruction there launched him on the academic road: a bachelor’s degree at Indianapolis University, then a master’s scholarship at Cambridge, now pursuing a Ph.D. in physics at Columbia in New York.

Coniglio is also working with Catholic scientists at the Institute for Advanced Physics, which seeks to retain “correct philosophical foundations” of science and “the proper moral spiritual component,” he said.

“I like it that the mascot (of McCarthy High) is the Maverick,” Coniglio added. “Someone who is not afraid to go against the grain, to do what's right for Christ and not conform to norms.”

Coniglio still serves McCarthy High in several ways. He has given two lectures on math to calculus students, and he plays piano for baccalaureate Masses whenever he's in town. This past school year, he even played piano for the play You're a Good Man, Charlie Brown.

“McCarthy High tries to develop aspects of the whole person: academics, faith, sports and arts,” Coniglio said. “All around, they really stand out.” 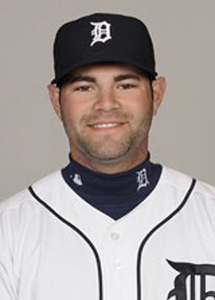 Maverick athletics, too, leave their mark on McCarthy students. Alex Avila excelled in baseball at the school – doing so well, he made a career out of it. Avila played in six pro baseball teams before retiring last year to Fort Lauderdale. He now works as an analyst for the MLB Network.

“I got the foundation to go to college and make an athletic career,” said Avila, a 2005 graduate at McCarthy. Although he was a B student, he says teachers took extra time to help him work through the lessons.

He went on to the University of Alabama, then was signed by the Detroit Tigers. He also played with the Arizona Diamondbacks, the Minnesota Twins and both baseball teams in Chicago, playing last with the Washington Nationals.

“Without my experience at McCarthy, it would not have been possible,” said Avila, who attends St. Anthony Church in Fort Lauderdale. “The school has done an amazing job over the years.” 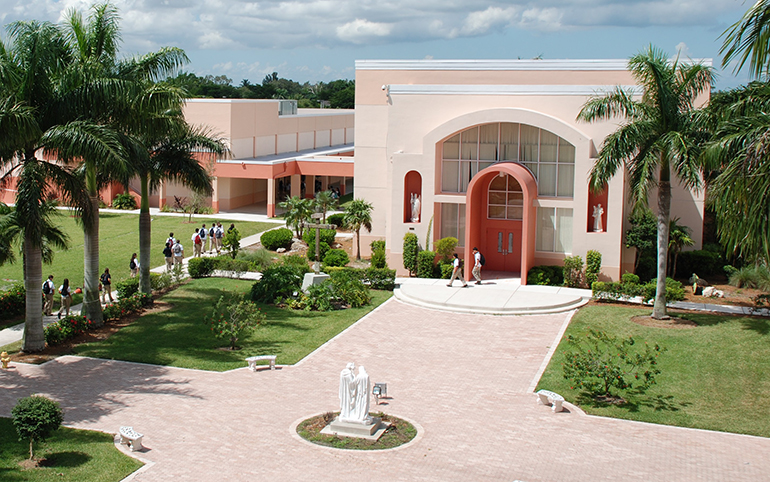 Partial view of the campus of Archbishop Edward McCarthy High in Southwest Ranches, with the chapel in the center.