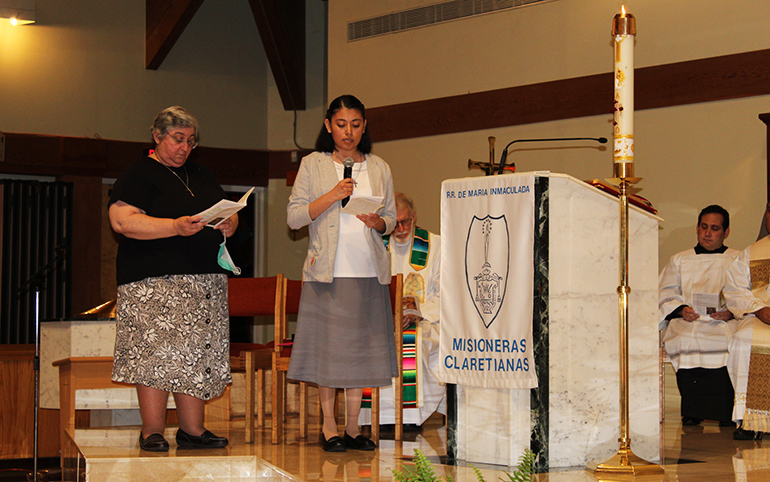 Sister Lizeth Guadalupe Manrique Musico, right, professes her final vows as a Claretian Missionary in front of her provincial superior, Sister Vivian Gonzalez, May 31, 2022 at St. Timothy Church in Miami.

MIAMI | Sister Lizeth Guadalupe Manrique Músico professed perpetual vows with the Claretian Missionaries on the feast of the Visitation of Mary, May 31, 2022. 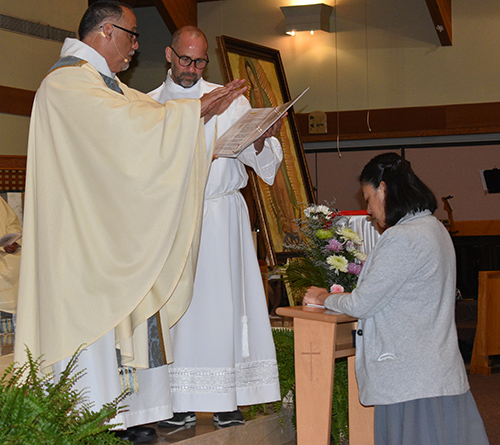 Father Pedro Corces imparts a blessing on Sister Lizeth Guadalupe Manrique Musico before she made her final profession as a Claretian Missionary, May 31, 2022 at St. Timothy Church in Miami. 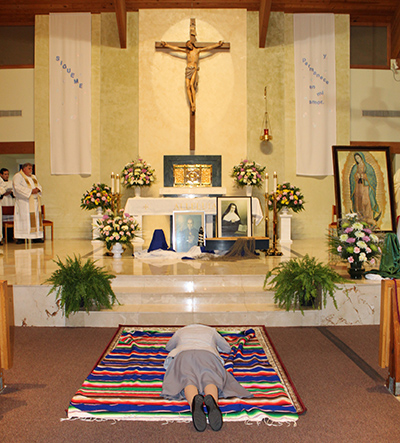 Sister Lizeth Guadalupe Manrique Musico prostrates herself while the congregation prays the litany of the saints during the rite marking her final profession as a Claretian Missionary, May 31, 2022 at St. Timothy Church in Miami.

“In the presence of my Claretian sisters and before the people of God here present, I professed my humble ‘yes’ to God for the rest of my life, before our provincial superior, Sister Vivian Gonzalez,” Sister Lizeth said.

“From Mexico, my parents and siblings accompanied me with joy and much love through the livestream transmission on social media. Thanks to his medium, my Claretian sisters from different parts of the world, friends and people I have gotten to know while on mission also were able to accompany me,” she added.

Sister Lizeth was born in León, state of Guanajuato, México, March 24, 1989. She is the oldest daughter of Armando Manrique and Luisa Músico, followed by four siblings: Salvador, Cecilia, Noe and Ruth.

She received the Catholic faith from her family and took part in catechesis directed by the Claretian Missionaries. The contact with them, and the witness of lay missionaries from Spain, began to awaken in her a desire to become a missionary.

In 2009, she became a postulant in Mexico City. Two years later, she was sent to Honduras to begin her novitiate, which concluded in Madrid, Spain, where she made her first vows on May 31, 2014. Immediately, she was sent to Carcagente, Valencia, to work in a school run by Claretian Missionaries, as well as in youth ministry.

She currently lives in the Miami community, where she ministers in vocational youth ministry and evangelization through social media.

“To profess perpetual vows in a place where so many different cultures live together is a constant reminder that ‘my spirit is for the whole world,’ as St. Antonio Maria Claret used to say,” Sister Lizeth said, referring to the congregation’s founder.

The feast of the Visitation of Mary is when Claretian Missionaries celebrate the Day of Claretian Vocations. Mary is the most excellent example of the missionary woman because she takes leave of herself to journey out and communicate the best news of all time.

“That is why Mary is our model of evangelization,” said Sister Lizeth. “For me, the feast of the Visitation is the feast of the encounter and the embrace. For that reason, I wish to live out my missionary vocation as Mary did: festively, devotedly, generously taking the good news of Jesus to others.” 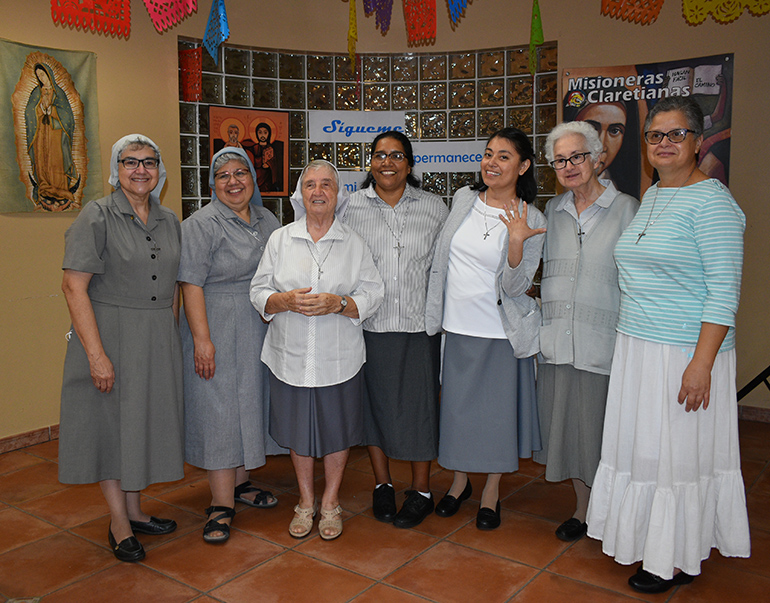 Sister Lizeth Guadalupe Manrique Musico, third from right, poses with her fellow religious who work in Miami after making her final profession as a Claretian Missionary, May 31, 2022 at St. Timothy Church in Miami.