MIAMI | Stewardship of the earth as “God’s cathedral” is part of the Church’s pro-life call to work for justice.

That was the message shared during an interfaith “Care for Creation” workshop attended via Zoom by 450 grassroots faith leaders, Catholics among them, as they reflected on the Church’s first ever environmental encyclical, “Laudato Si: on care for our common home.”

The workshop, coincidentally, took place around the same time the United Nations released a report on the increasingly pervasive impact and irreversible damage of global warming, such as intensified floods and hurricanes.

As marginalized communities are most affected by the degradation of the environment, the interfaith leaders considered the encyclical’s twofold call to respond to “the cry of the earth and the cry of the poor.” 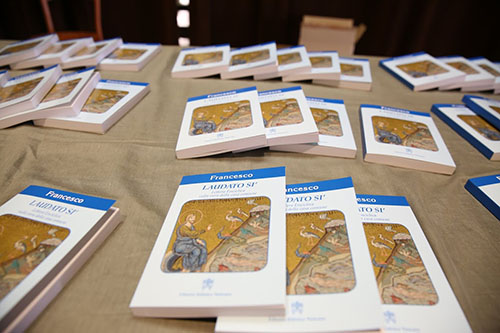 Copies of Pope Francis' encyclical "Laudato Si" are shown at a press conference in Paul VI Hall in Vatican City on the day it was released, June 18, 2015. The name of the encyclical is taken from St. Francis of Assisi's medieval Italian prayer “Canticle of the Sun.” The encyclical addresses the environment, climate change, abortion, embryonic experimentation, and population control.

The Aug. 17, 2021 workshop was organized by The Dart Center, which comprises 28 interfaith social justice ministries that strive to address community concerns ranging from gun violence to affordable housing. Catholics took the lead on the topic of the environment: the Archdiocese of Miami, Miami’s PACT (People Acting for Community Together), the Catholic Campaign for Human Development, Allegany Franciscan Ministries, the Center for Christogenesis as well as the dioceses of St. Petersburg, St. Augustine, Columbus, Ohio, and Richmond all sponsored the workshop.

Deacon Paul Koppie, a retired aerospace engineer from the Diocese of St. Petersburg, is a member of the FAST justice ministry there. He reported that 17 DART network justice ministries are holding follow up committee meetings to address how flood, heat, pollution, mold, hunger and storms are hurting their communities.

“We believe that doing justice is a core part of our faith traditions and yet one that is often overlooked. Our vision is to build up the work of justice within each of our congregations,” Deacon Koppie said. “We have an important role as people of faith to make our communities more just and caring for creation. This means we are not only finding ways to be more reflective and individually care for creation but that we will also hold our communities accountable for just practices.”

Archbishop Thomas Wenski, one of the speakers at the workshop, reflected on Pope Francis’ message in Laudato Si that “we need only take a frank look at the facts to see that our common home is falling into serious disrepair.” (Click here to read his column on this subject.)

He, along with Marina Lopez of Charleston Area Justice Ministry, and Dr. Lee Ann Clements and Msgr. James Boddie from the Diocese of St. Augustine, reflected on how fear, scarcity and despair have been used to create unjust policies that hurt marginalized communities.

Haitian community activist Josette Joseu, a member of PACT at St. James Church in North Miami, described how many longtime residents are being driven out of Little Haiti due to rising rent prices and city policies that favor developers. With sea level rise, wealthy investors drawn to its higher elevation are moving in.

“Now, as people can’t stay on their land where they used to live, it’s a very big problem,” she said. “We know that the planet earth is our common home so let’s please try to come up with solutions good for everyone... Let there be justice.”

Father Alfred Cioffi, associate professor of biology and ethics at St. Thomas University, explained that Laudato Si means “praise be to you” and is taken from St. Francis of Assisi’s creation canticle.

Accessible on the Vatican website, the encyclical is indeed “pro-life” because “all life is sacred in the sense that it is a reflection of God’s creation,” Father Cioffi said. “The perceived chasm between those who take care of the environment and those who take care of human life is another instance of misinformation.”

“This encyclical really puts it all together for us, the sanctity of human life and the sanctity of creation and we have a charge to protect it and not destroy it,” Father Cioffi said.

She addressed the ancient history of that chasm of disconnection between the Church and science following the Middle Ages, when scientific inquiry began to remove God from the equation and philosophers like Rene Descartes emphasized mind over matter.

“We sort of detached the body and mind and this has given rise to what I think is a crisis of transcendence. We have no place to lose ourselves, we don’t think of matter or things of nature as a place of mystery,” said the Franciscan. “So instead of finding mystery in the natural world like St. Francis of Assisi, we look for mystery in things of other worlds — technology, cyberspace, consumerism and all the addictions that we now have today.”

But modern science is renewing the sense of mystery, such as the Bing Bang theory of the 13.8-billion-year-old universe, she noted. And science teaches that “nature is composed of deeply entangled fields of energy. If we look to our fundamental physical roots, we live in an undivided wholeness and this wholeness is dynamic.”

Today the Church must proclaim the holistic creation story of the universe, earth and human life.

“What should we do on the parish level? We need an incarnational commitment. This is the core of our faith that God has become flesh, that God has become matter, and draws all things through love into that fullness of being. So we don’t find a God in opposition to matter or independent of matter but through matter,” Sister Ilia continued.

The first step to growing into that “Christ-consciousness” is to practice simplicity and take only our fair share.

She exhorted her listeners to see the human community and the natural world as “a unified single community with an overarching purpose,” nothing less than “the joy of existence, the praise of the divine, of God, and the participation in the great liturgy of the universe in which St. Francis realized the whole universe is the cathedral of God,” she said. “St. Francis of Assisi himself spoke to flowers and he saw himself as a brother to birds and worms and trees.”

Deacon Koppie invited all faithful to live out Laudato Si, which states that “humanity still has the ability to work together in building our common home.”

“We hope that as a result of this workshop you’re able to join in with your local justice ministry organization to be part of an action team to host or attend a house meeting and to energize your congregation around the values that Laudato Si teaches us,” he said.