Archbishop Thomas Wenski preached this homily during a Mass where a group of Servants of the Pierced Hearts of Jesus and Mary professed their final vows. The Mass was celebrated Aug. 22, 2021 at Miami’s St. Mary Cathedral.

We see here before us six young women who after a long discernment – their own and that of their superiors – come before the Lord today to profess final vows as Servants of the Pierced Hearts of Jesus and Mary. Thank you, Sisters Bethany Marie, Evelyn Maria, Clara Maria, Lucia Maria, Mary Angela, Kristi Marie for your generous response to the Lord’s call to consecrated life through which you seek the magnify the “characteristic features of Jesus, the chaste, poor, obedient one” and make them through your lives constantly visible in the midst of the world.

We welcome your families and friends who gather today with the Servants and Missionaries to witness your profession of final vows through which you will definitively and irrevocably give yourselves entirely to Jesus, vowing poverty, chastity, and obedience – plus a fourth vow distinctive of this religious congregation, that of total Marian availability. 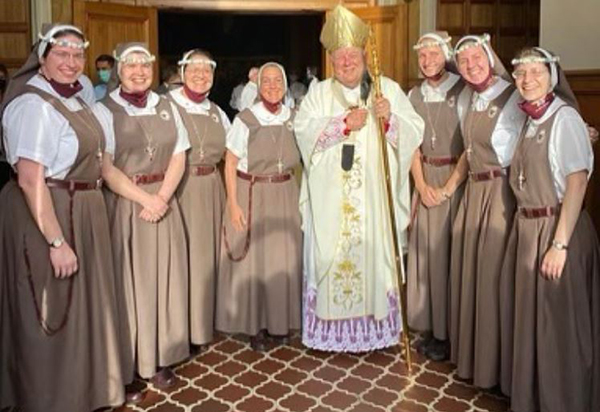 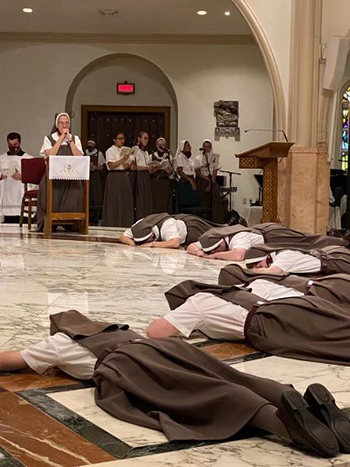 Sisters, all of you have Mary or a version of Mary as part of your names in religious life. And so, it is fitting that you make your profession today, August 22nd, the feast of the Queenship of Mary. This feast witnesses to the triumph of the Immaculate Heart of Mary – and the power of her intercession. And her intercession will help you persevere in the vows you profess today. It is these vows that enable you as consecrated women to imitate the virtues of Mary’s own heart and to serve faithfully the Lord in his Church.

Mary's life can be summed up with four words found in the Gospels. The first word is “Fiat” — this is Mary's “yes” to the proposal God made to her through the Angel Gabriel. The second word is “Magnificat” – “my soul magnifies the Lord,” as one translation renders it. “Magnificat” describes then Mary's response to God's grace at work in her life. Then, a third word, “Conservabat” — Mary kept all these things, pondering them in her heart; and a final word, “Stabat,” which describes her standing faithfully at the foot of the cross watching her son die for humanity.

Fiat, Magnificat, Conservabat, Stabat: Mary's life in a nutshell. These words are also descriptive of the vocation of the Servants of the Pierced Hearts. But since Mary’s “Fiat” made her the first disciple or Christian, these words also set forth a pattern for each of us to follow in our own lives. We too are called to say “Yes” to God's plan for our lives, and our response to that plan lived out concretely in our lives should also “magnify the Lord.” We too are to keep the Word alive in our hearts, meditating on the things that God has done for us; and to stand with Christ, especially to stand with him in the poor, the suffering, the persecuted.

The world – and too often the faithful – see these vows as simply renunciations. However, they are more than that – for evangelical counsels of poverty, chastity and obedience, each in its own unique way, is a specific acceptance of the Mystery of Christ lived out within the Church. The vows do not constrain or limit your freedoms; the vows make true freedom possible. Poverty frees us from burdens of possessions; chastity liberates us from slavery to vice, and obedience gives us the freedom to serve. So, to promise to follow what are called the evangelical counsels is in no way a limiting of freedom or a diminishment of one’s life or possibilities; rather the vows that these sisters solemnly make today are what make it possible for them in imitation of Mary to cooperate in the work of redemption

In the world, we see people who are concerned with their own autonomy, people jealous of their freedom, people fearful of losing their independence. In such a world, as religious sisters, you are – and you must be – signs of contradiction. Your existence – in the world but not of the world – points to the possibility of a different way of fulfillment of one’s life, “a way where God is the goal, his Word the light, and his will the guide, where consecrated persons move along peacefully in the certainty of being sustained by the hands of a Father who welcomes and provides, where they are accompanied by brothers and sisters, moved by the same Spirit, who wants to and knows how to satisfy the desires and longings sown by the Father in the heart of each one.”

The vowed life is fundamentally a decision to stand on God’s word. In today’s first reading, Joshua demands the Israelites to decide. “As for me and my house, we will serve the Lord.” Likewise in the Gospel reading, in the face of the murmuring of the crowd who found his teaching about his giving us his flesh as food too “hard” to accept, Jesus asks for a decision from his disciples. Peter answers for the twelve. His answer is full of faith and trust, and he abandons himself to Christ. “Master, to whom shall we go? You have the words of eternal life. We have come to believeand are convinced that you are the Holy One of God.”

Today, these six women solemnize their decision for Christ and his Church to live as consecrated members of Christ’s faithful in the community of the Servants of the Pierced Hearts of Jesus and Mary. Deo Gratias!