Reporter's notebook: my days at Surfside 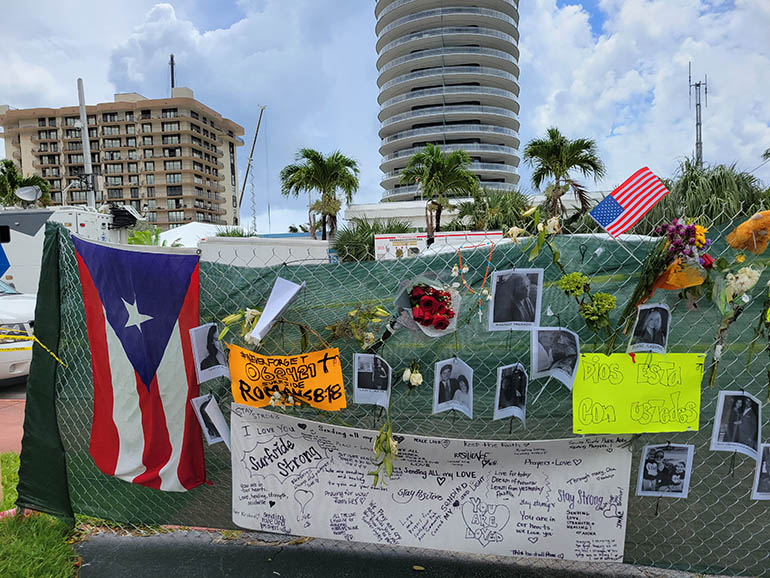 Filled with pictures, flowers, rosaries, and words of comfort, a temporary memorial for the missing and for the victims of the Champlain Towers South condominium (on the left) was erected on the sidewalk of Stella Maris House, behind St. Joseph Church. The memorial was relocated on the evening of July 1, 2021, and added to the larger memorial at the tennis court across the street from the collapsed building. 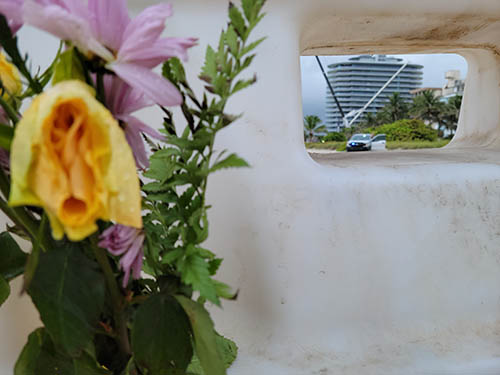 Flowers from a vigil memorial were left at the perimeter barrier set up on the beach north of the Champlain Towers South building collapse.

MIAMI BEACH | Tuesday, June 28, marked six days since the building collapse at Surfside. It was day one for me on location.

While I am a native of South Florida familiar with hurricanes and the destruction they leave behind, this disaster area was unlike anything I have ever lived. The following are vignettes of what I experienced that first day, plus another vignette about a group I met my last day at the site, July 2.

Other stories I acquired throughout those four days appeared in the July print edition of the Florida Catholic and La Voz Católica, as well as this month on the archdiocesan website.

At some point early Tuesday morning, someone left a bag filled with Starbucks breakfast sandwiches at the door of the rectory of St. Joseph Church. It’s possible that the anonymous donor rang the doorbell and no one answered — not out of privacy, but because the doorbell has become progressively unresponsive during the week, due to the overwhelming amount of people who have been ringing it. Either way, the generous stranger’s intention was fulfilled, as the donation helped to feed those who were working hard on the parish end to continue helping others whose needs were bigger than ours. 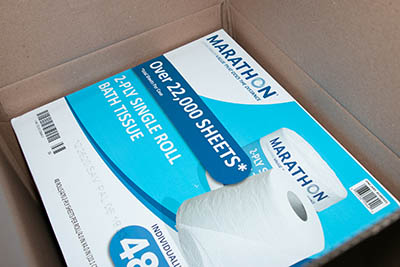 Toilet paper was among the much needed donations gathered by students and families at Immaculata-La Salle High School in Miami for St. Joseph Church, Miami Beach, which is serving as a base of operation for members of the media covering the collapse of Champlain Towers South in Surfside. The supplies arrived the afternoon of July 2, 2021.

Chain reactions of help like this were constantly in motion. A few days later, a truckload of goods collected by students and parents at Immaculata-La Salle High School in Miami arrived. Among the many desperately needed items: toilet paper, since St. Joseph had opened its parking lot — and church bathrooms — to the dozens of print and TV reporters who were on site to cover the story.

The staff at St. Joseph Church is small. Occasionally, a visiting priest or other guest can be accommodated when the group sits at the table for meals. The cook, the mother of one of our archdiocesan priests, knows how much food to cook under regular circumstances. I don’t think she imagined that eight others would sit down at the table that Tuesday. A little embarrassed, she was quick to apologize for not preparing more.

But no one went hungry that day, and the food seemed to multiply — reminding me of the Lord and the multiplication of the loaves of bread and fish. Along with the anonymously donated Starbucks sandwiches, we had a salad, and a lentil soup that was so good it rivaled my grandmother’s (I don’t have it in my heart to tell her yet, but I’m sure she’ll read it here soon.).

We’ve all heard stories of dogs having an awareness and understanding that humans lack. 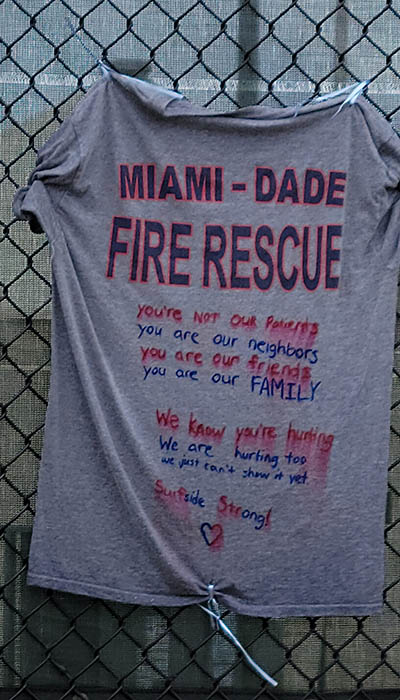 A T-shirt supporting Miami-Dade Fire Rescue and other first responders is left on the memorial wall for those affected by the Champlain Towers South building collapse in Surfside. 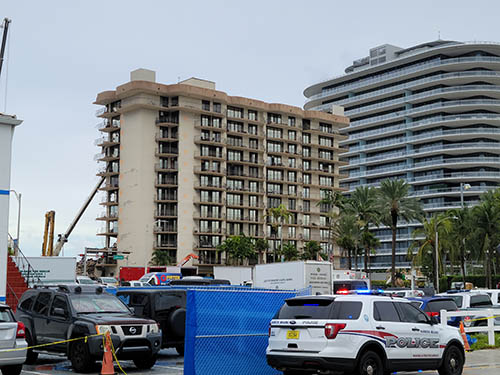 A view two streets west of the Champlain Towers South condominium in Surfside reveals part of the building that is still standing as recovery efforts continued June 30, 2021. Collins avenue, and its surrounding perimeter, have served as a major disaster recovery site with local, state, national, and international assistance on site.

The first dog I encountered on location was not even at the building collapse site. His name is Clause and he belongs to Father Juan Sosa, St. Joseph’s pastor. He is the first big gray dog (Weimaraner) with light eyes I have ever encountered. And while he was lounging in a room apart from the rectory, when our team arrived he became alert and excited, wagging his tail, as most dogs do when they meet someone new. I’m sure he knew something was different about his day.

Later, at the temporary memorial wall erected on the sidewalk by Stella Maris House (the Catholic Health Services residence for low-income seniors located behind St. Joseph Church), two women arrived with a small dog. Possibly a mother and her daughter, they came to visit the memorial. Media and the press had camped out there, so they captured the moment and asked for interviews. As they spoke with the women, the dog was anxious, yipping and whining; a stark contrast to the owners who appeared calm and reserved. It wasn’t until the daughter finally knelt to scoop up the small dog that it significantly calmed down, licking the girl’s hand repeatedly — perhaps out of gratitude, and perhaps out of empathy for what we were all going through.

Like the dogs working on the site, they know and feel more than we will ever know. 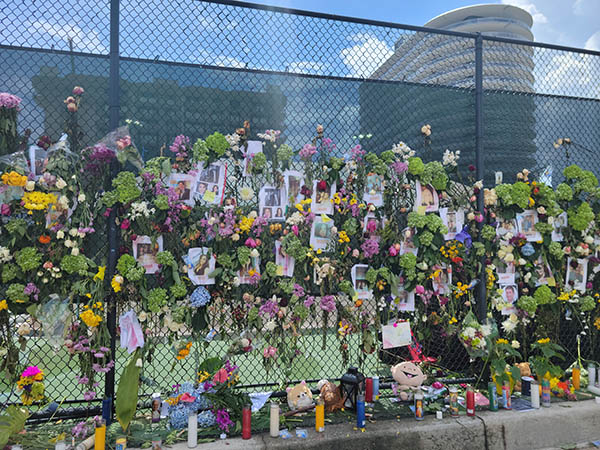 The memorial wall at the tennis court across the Champlain Towers South building collapse is filled with photos of the missing and victims, flowers, candles, rosaries, and more. Some of the toys and stuffed animals placed at the memorial were reportedly recovered from the building collapse site.

The main memorial wall on the tennis court fence is on Harding Avenue, one street west of the Champlain Towers South collapse site. It is adorned with photos of the missing, and hundreds of flowers, candles, signs, letters, stuffed animals (which I later found out were recovered from the site), rosaries, Miraculous Medals of the Immaculate Conception, and more. The police don’t want media lingering long in front of it because there is a lot of official traffic flowing up and down the street.

I took a few photos with my phone and started recording, but as requested by an officer, I stopped and moved along. Unbeknownst to me, a man on a bicycle had stopped next to me to look at the memorial, and he struck up a conversation. I’m hesitant to ask too many questions, especially inappropriate and callous ones that, under the circumstances, may offend a resident affected by the collapse. As we continued to talk, however, he was the one who made me feel comfortable. When you’re a part of the media, you don’t always get warm answers. This man, at least, was genuine and grateful that we were there doing our work.

He told me he lives a few buildings north of ground zero, and said that family of some of the missing live in his building. He added that he’s worried about his own building, and has started looking at its maintenance and structural engineering records.

Before he left, I wished him well, and asked, like a tourist, “How do we get to the beach?” (We wanted to get a glimpse of the fallen building from there since police barricades blocked our view from the street.)

Three volunteer members of the Red Cross rested on the steps of St. Joseph Church the morning of July 1, 2021 — the first day the sun peeked out through a bit of blue sky after a series of rainy days at the site.

The heat and humidity were typical of a summer day in South Florida, but the day and the circumstances weren’t. Volunteer bus services, as well as other means of transportation, had slowed or stopped altogether to accommodate the extra security in place for President Joe Biden’s visit to Surfside, where he met with the families affected by the building collapse, officials, first responders, and others. 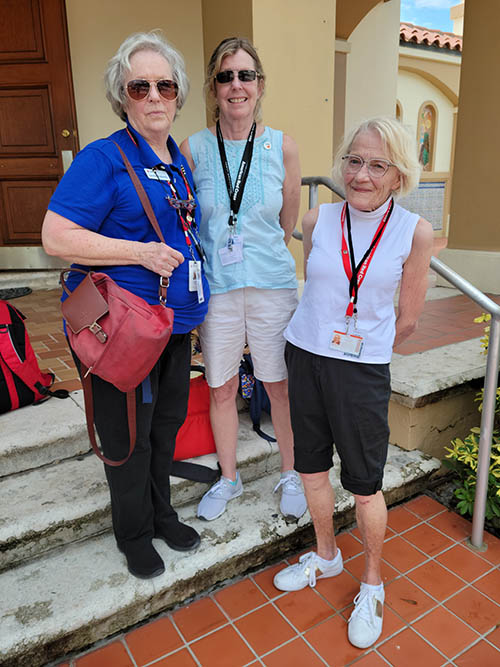 Volunteers from the Red Cross, all retired nurses, take a break from the heat on the steps of St. Joseph Church in Miami Beach on July 1, 2021, during recovery efforts for the Champlain Towers South building collapse. From left: Leslie Roberts, from Austin, Texas, Pat Duncan from Eustis, Florida, and Shirlee Reding from Des Moines, Iowa.

For Leslie Roberts from Austin, Texas, Pat Duncan from Eustis, Florida, and Shirlee Reding, from Des Moines, Iowa, it meant that they had to walk to the reunification site where families were waiting for word on their loved ones. But the three retired nurses said they didn’t mind. They are part of the Integrated Care and Condolence Team, a small group within the Red Cross, that follows up on mass casualties and fatalities caused by fires, hurricanes, tornadoes and other major events.

“We are the condolence care to them, which we go in after things settle down, just a little bit,” said Roberts.

At the time, they were assisting with relocations and temporary housing for families, as well as funeral arrangements.

When asked what survivors need at this moment, their answer was clear.

“Support,” said Duncan. “Community support, and support that will be with them for the long term. Right now, they’re like the walking wounded. Everybody is just in shock.”

Roberts added that those affected need “love, communication, and sharing. The experience is so bonding, they need to support each other, and the community needs to support whatever those needs are for what their new normal looks like.”

I saw many more things that I would like to write about, but I know my space here is limited. Other Florida Catholic and La Voz Católica reporters have also been working diligently on sharing how the Catholic community in South Florida has responded to the tragedy at Surfside. (Put in the keyword Surfside to search for all the articles.)

And I have come to understand that the press truly serves as the eyes and ears of those who want to see and hear. We are there to witness, and share the witness of others. We, too, were hurting, and at the same time, wanting to help. 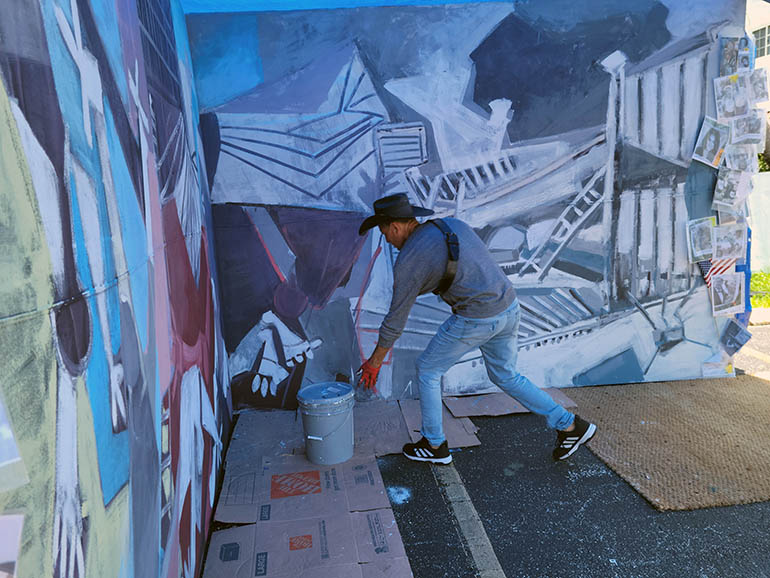 In the parking lot north of St. Joseph Church, artist Roberto Marquez works on a memorial mural depicting the aftermath of the Champlain Towers South building collapse. He describes one of the most heart wrenching visuals to be the sight of the bunkbeds found in the still standing part of the building.

Hope Sadowski - 07/27/2021 04:43 PM
Cristina lovely coverage! You wrote about things, that although St. Joseph is my parish, I didn't know. The hurt will last a long time every time we look at that empty space and think all the friends we lost that fateful day. But the community will come back even stronger by the fact that during this awful month we have come together as one. Makes you think their death was not in vain. May they all rest in peace and for sure never forgotten. Thank you