Archbishop Wenski's homily at priest's profession of vows with Pierced Hearts, on feast of Sts. Peter and Paul 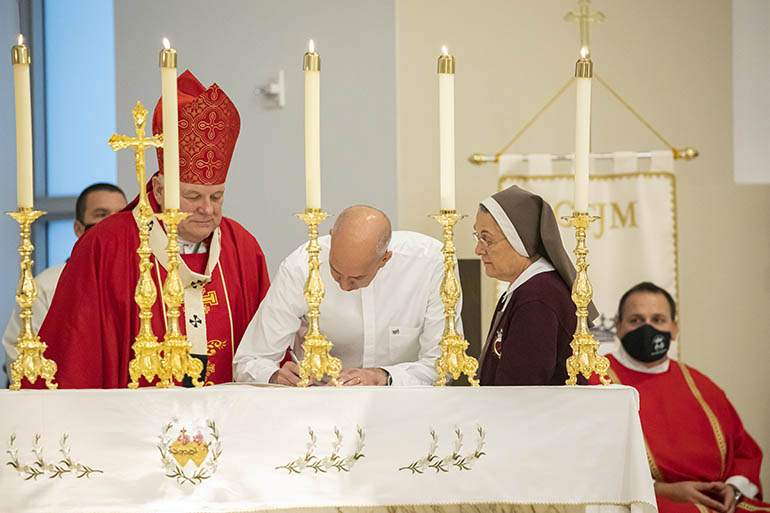 Having taken on a new name, Father Joseph Mary of the Priestly, Pierced and Eucharistic Heart of Jesus signs the Formula of Profession as Archbishop Thomas Wenski and Mother Adela Galindo, foundress of the Servants of the Pierced Hearts of Jesus and Mary, look on.

Archbishop Thomas Wenski preached this homily June 29, 2021 at Our Lady of Guadalupe Church in Doral, during the profession of vows of the first priest to join the Servants of the Pierced Hearts of Jesus and Mary.

And, of course, today we celebrate the solemnity of Sts. Peter and Paul. Both men were martyred in Rome – and both are considered founders of the Church in Rome, from where the successor of Peter “presides in charity” over the universal Church.

When Peter witnessed the transfiguration, he exclaimed, “It is good for us to be here.” Tonight, it is also good for us to be here as Father Joe chooses to be with the Lord and to devote himself to the Lord as a Servant of the Pierced Hearts of Jesus and Mary. In Pope Saint John Paul II’s Vita Consecrata, an apostolic exhortation delivered after the Synod on Consecrated Life in 1995, he describes religious life as an “Icon of the Transfigured Christ” – for the vowed life does proclaim and anticipate the future age when we will experience the fullness of the Kingdom.

Jesus chose Peter to be the rock on which he would build his Church; Jesus called Paul to bring the good news to the nations. One might be tempted to second guess the wisdom of Jesus’ choices: after all, Peter was to deny Christ three times, and Paul was an accomplice in the murder of Stephen, the first martyr. But God’s wisdom surpasses human wisdom.

Jesus named Simon “the rock”; but Simon Peter’s rock was Jesus himself. And, as we see in today’s Gospel, he had the insight to see Jesus as he truly is: the Son of the living God. Paul discovered that the foundation of true life was not the law but Jesus himself. He clothed himself in Christ so that he could boast that “he no longer lives but Christ lives in him.”

Today, in surveying the situation of the Church and the world, we can be tempted to feel discouraged, to bemoan the growth of secularism, to fret about divisions and polarization found not only in society but in the Church. But both Peter and Paul have something to teach us today – for we must seek new ways of being like Peter and Paul in order to bring the good news of Jesus Christ to the world. The Servants of the Pierced Heart – a new and young community of religious women and now also men – offers one such new way.

Pope Francis has spoken about the dangers of being a “self-referential” Church. A self-referential, inwardly looking Church is a dying Church. If we lose our sense of mission, numbers will inevitably dwindle, and our parishes will decline. Therefore, the Pope speaks so much about the need that we be “missionary disciples.”

Devotion to the Pierced Hearts is not just sweet, sugary, sentimental piety. Yes, the heart throughout human history has symbolized love – and too often love – human love – has been reduced to the sentimental inanities found on a Valentine Card and worse. But here, in speaking of the Sacred Heart of Jesus and the Immaculate Heart of Mary, we are talking about the love of God revealed to us in the person of Jesus Christ and Mary, a love revealed through their pierced hearts. And being “missionary disciples” of Christ is not just about forming a community of followers of Jesus but also about telling others of what we have found in Christ: joy and peace, and, through the forgiveness of our sins, hope.

Joseph, your life’s journey has brought you here to begin another journey as a vowed religious – or rather, another phase in the journey which began in baptism. Like the Virgin Mary’s own journey, your journey is a pilgrimage of faith and consecration. A pilgrim – of necessity – cannot be weighed down by extra baggage. And for this reason, the evangelical counsels help you mirror in your own life Mary’s free response to the Lord’s invitation. Poverty, chastity and obedience lived according to the spirit of your congregation’s rule of life are not simply renunciations; rather the vows free you for the journey. May her prayers – and her example – continue to encourage you on your journey.