Columbus state wrestling champion Christian Guzman is pictured here with teammates and coaches after the state championship final in Kissimmee in March 2021.

MIAMI | Columbus wrestler Christian Guzman and Cardinal Gibbons wrestler Nicholas Yancey each won state championships in their divisions to add to the five championships earned by archdiocesan schools in winter sports this year. 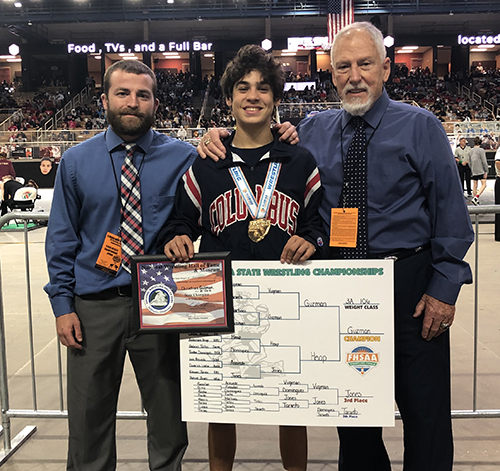 “At the beginning, I was a little nervous,” said Guzman. “I was just focusing on getting to my attack, going first before he goes.”

Columbus coach James Husk said Guzman benefited from getting taller the last couple years. But ultimately, he won because of endurance. He said Guzman could go all-out the entire six minutes of regulation and overtime if need be. “A lot of kids can’t do that,” Husk said. “If they get pushed, they break or they fold or give up. I don’t think he knows those two words, ‘give up.’”

Guzman’s endurance came because of hard work. “It was kinda eating me from being so close yet so far,” Guzman said. “Going into the state tournament, I was going out there to have fun. When I wrestle like this, I have fun at big meets. No one at the state meet can hang with me.”

Husk said Guzman has always been tough since entering the starting lineup midway through his freshman year. He said Guzman succeeds because he’s willing to sacrifice. He carried on a strict diet and strong workout routine.

Guzman lost only twice this year – once to a Miami kid he came back to beat a couple times, and another to a West Coast wrestler. “He won (Greater Miami Athletic Conference), he won district, he won region, he won state. He won everything,” Husk said. “He had competition at state too. You get up there, those are 16 best kids in the state of Florida in the big-school division. He was ready. He went out there did his job.”

Gibbons’ Yancey, a sophomore, won the Class 1A 106-pound class, giving the Chiefs their first individual title since Christopher Williams won the 2017 Class 1A 195-pound title.

Yancey won after finishing fourth as a freshman at 106. Cardinal Gibbons coach Jamel Morris said that he believed Yancey could win a state title, but Yancey had to be convinced. 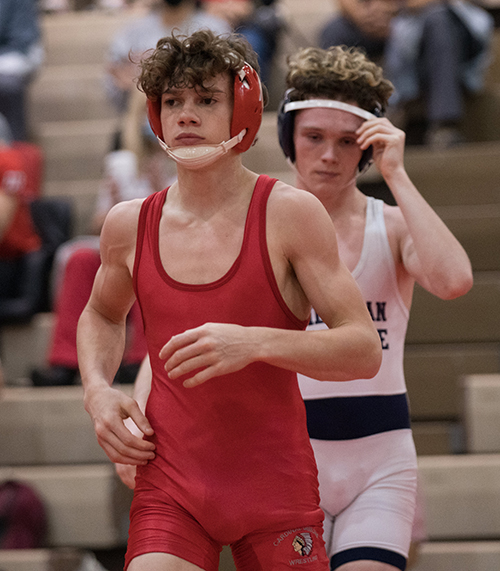 “This year we helped him focus on the mental aspect of wrestling,” Morris said. “He started enjoying it well. He hates to lose. We put him in a position to be battle-tested.”

That mental aspect was tested in the final, when Yancey beat Palm Bay’s Tyler Perrow by Ultimate Tie Breaker, 3-2. He reached the final by beating Tenoroc’s Brandon Coleman by fall, South Walton’s Max Brewster 11-5 and Mater Lakes’ Dylan Garcia by fall in 3:19.

“He’s just a great kid, who doesn’t like to lose,” Morris said. “Whenever we do fun games, he never likes to lose. That’s all you can ask. If they give 100 percent effort, that’s all a coach can ask for. That’s what he did.”

Yancey guided the Chiefs to a fifth-place finish with 97 points. Pembroke Pines Somerset Academy won the 1A title with 196 points.

Morris said Yancey led the Chiefs by example. “He’s always mentally focused going into matches,” he said. “He works hard in practices. He goes hard on the mat.”

He added that Yancey wants to go undefeated next year. That could put him toward another lofty number – three-time champion. Jamal Morris, the current coach’s brother, did it. Yancey could do it with titles in his junior and senior years.

Cardinal Gibbons also advanced to the Dual-Bracket state meet in Class 1A in January. But the Chiefs lost to champion Somerset Academy 39-21 in the quarterfinals. 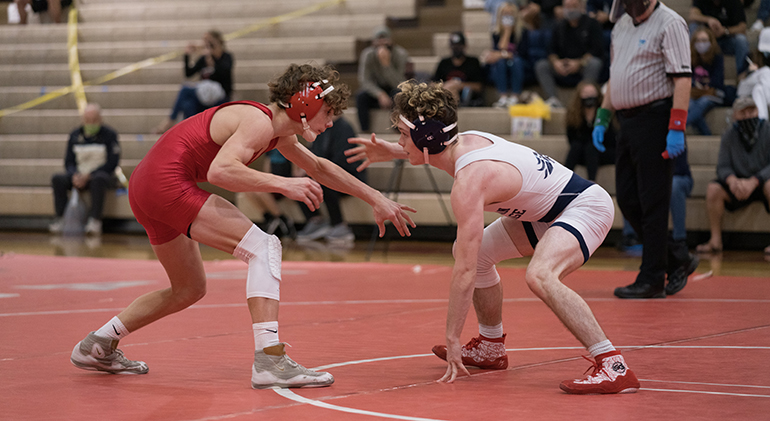 Cardinal Gibbons sophomore Nicholas Yancey, left, is seen here in action during his run to the state championship. Yancey guided the Chiefs to a fifth-place finish at the finals.