St. Brendan football: Ready to 'compete with the top dogs'

After 8-1 season, next year's challenge is to move from independent status to join FHSAA 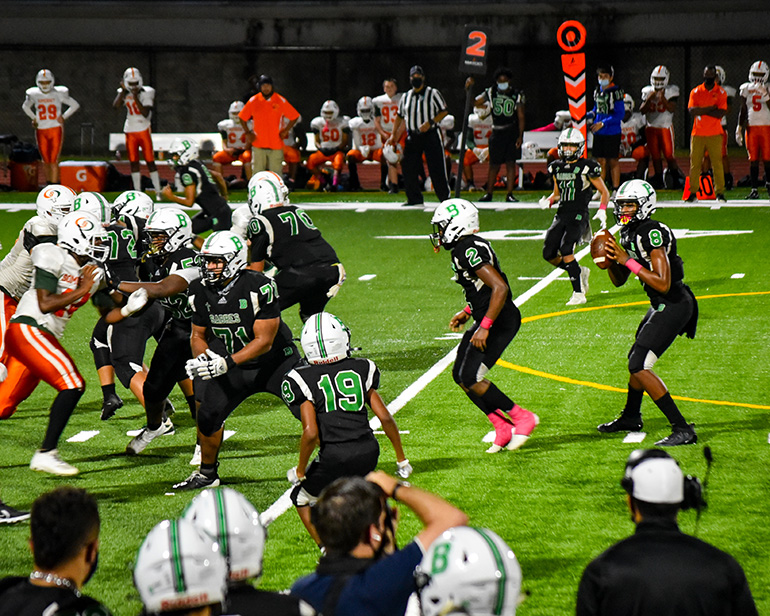 MIAMI | A few words come to mind when it comes to St. Brendan football: struggle, COVID, distance, persistence, adapt, work. Coach Luis Rodriguez and the Sabres finished in 8-1 in a season that almost didn’t happen.

St. Brendan looked to build on a 10-1 2019 season, but they had to do so with a team that had only three seniors. In normal seasons, spring football, summer weight-room time and summer preseason would give the Sabres plenty of time to acclimate newcomers and get more repetitions.

Coronavirus invaded like a blitzing linebacker, sacking most of South Florida along with the rest of the world. The COVID-19 pandemic erased spring football and limited indoor activities. That forced the Sabres to drag the weight-room equipment out onto the practice field. 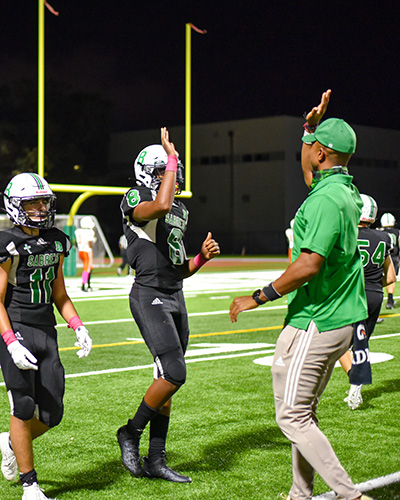 “We had to keep them active on the field. We could do only 6-8 kids in the weight room,” Rodriguez said, noting “that was the most difficult task” because of the number of athletes on the team.

Sophomore quarterback Damari Charlton said the COVID rules forced players to find other ways to get in their workouts, including local gyms. “We found ways to get faster and stronger and work on acceleration on our own,” Charlton said.

Team bonding wasn’t the only thing compromised by the pandemic. Efforts to grow the Catholic faith in the team moved online. Rodriguez said the team could not have its annual preseason retreat due to COVID. The team then tried to have minimal gatherings, starting off in pods. As the season progressed, the team could pray together but still distanced.

Charlton and sophomore linebacker Christian Lowry said Principal Jose Rodelgo Bueno would pray with the team as well, encouraging the players to pray for others through special intentions. Dandridge said he takes that prayer into his daily life.

Rodriguez said the obvious intention was that no one would catch COVID-19.

“We pray not only for the faith but for each other,” senior linebacker Eric Rangel said. “When we go on the field, we’re not just going to play football. We pray for each other. We’ve got each other’s back.”

MOVING FOR THE TEAM

The Sabres had to break in a new quarterback. Charlton answered the call, moving from wide receiver to signal-caller. Rodriguez said that Charlton grew as a leader while throwing for 1,338 yards and 20 touchdowns. 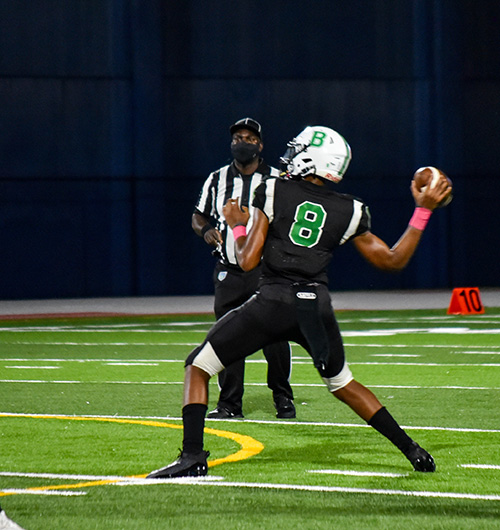 Richard Dandridge, a fellow sophomore receiver, said they built a strong connection. Dandridge benefited with 27 catches for 736 yards and 13 touchdowns this season. He capped it off with a five-catch, 208-yard, three-touchdown game against Mater Academy Charter.

“That game, it was very intense,” he said. “We were on the 5-yard line on one play, and the linebacker kept sticking me. I ran a seam route and broke it for 90 yards.”

The Sabres also excelled because of a defense that held seven of their nine opponents to 8 points or fewer. St. Brendan even posted four shutouts.

Rangel, who transferred from 2019 Class 8A state champion Columbus, brought more intensity to the Sabres on defense while posting 56 tackles. Rangel said Columbus expected to win, and he wanted the Sabres to expect the same. 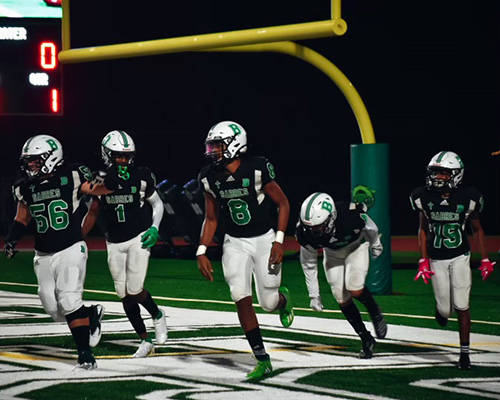 St. Brendan High players get off the field during an Oct. 23, 2020 game against Somerset Academy South Homestead, which St. Brendan won 48-7.

“Coming to St. Brendan, I knew we had to bring this thing together,” Rangel said. “Our weight room may not be as big or the field nor as nice, but I knew that if the team was like a brotherhood we’d go far. You can see it in the 8-1 season.”

Linebacker Lowry led the way with 65 tackles. He initially filled in for injured middle linebacker Tyrell Franklin. Then he moved to safety upon Franklin’s return, which strengthened the defense more. Jose Magarin added 40 tackles and two interceptions.

YOU CAN DO BETTER

The Sabres received their stiffest test in a 27-14 Week 3 loss to Belen Jesuit. Tied 7-7 at halftime, Belen rode its running attack to a strong second half. The Wolverines racked up 257 yards and three touchdowns. Lowry had 14 tackles in that game despite missing part of it with an injury. Charlton had 148 yards passing with two touchdowns and one interception. But the Sabres could manage only 100 rushing yards.

Lowry said the season turned on that game, because it challenged the Sabres to work harder to get stronger and solidify their tackling. “It was a mentality change,” Lowry said. “Belen ran the ball a lot on us. The defensive line had to get more physical. The linebackers had to fill the hole more. The safeties needed to pull up.”

Charlton said the offense also received its challenge. “Us losing to Belen gave us a chip on our shoulder, to play every game like there’s no tomorrow,” he said.

As the Sabres look to next season with most of their players returning, those coaches will help prepare the players for an offseason they hope will happen. Rodriguez also looks to challenge the Sabres by moving them from independent status into an FHSAA district. St. Brendan’s enrollment of 1,227 likely would place the Sabres into Class 5A. 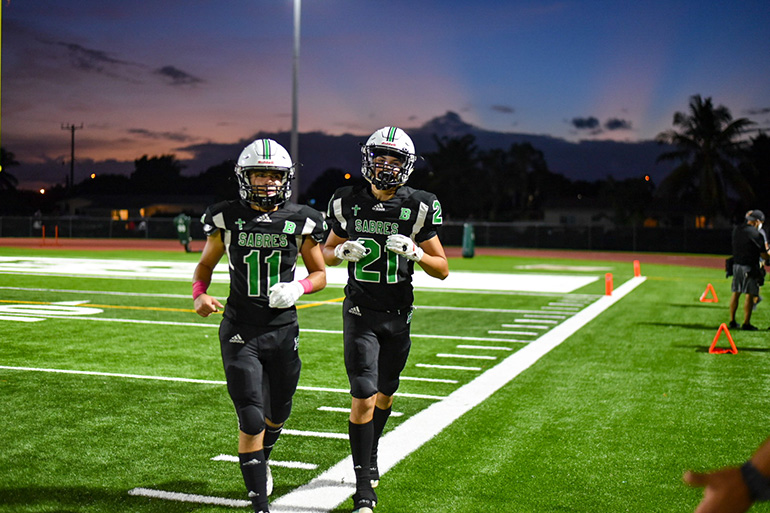