On being a bishop: We chose to be 'fools for Christ'

Archbishop Wenski's homily on 23rd anniversary of his ordination as bishop

Archbishop Thomas Wenski preached this homily during a Mass at St. Martha Church in Miami Shores, attended by Pastoral Center employees, on Sept. 3, 2020 – the 23rd anniversary of his ordination as a bishop.

Today, I thank all of you here at the Pastoral Center who join with me today for this Mass. Today, of course, is the 23rd anniversary of my being ordained a bishop on the date on which my parents, had they been still alive, would have celebrated their 50th wedding anniversary. I was ordained, of course, by Archbishop [John C.] Favalora – and, many of you were there at the Miami Arena, among the 11,000 people in attendance. Who was there 23 years ago? Archbishop, I thank you for being here today – and we did thank Divine Providence that you were there 23 years ago – just two weeks after quintuple bypass surgery.

"Duc in altum" (Luke 5: 4) – Put out into the deep and let down your nets for a catch. Jesus said this to Peter and his companions when he called them to become “fishers of men.” 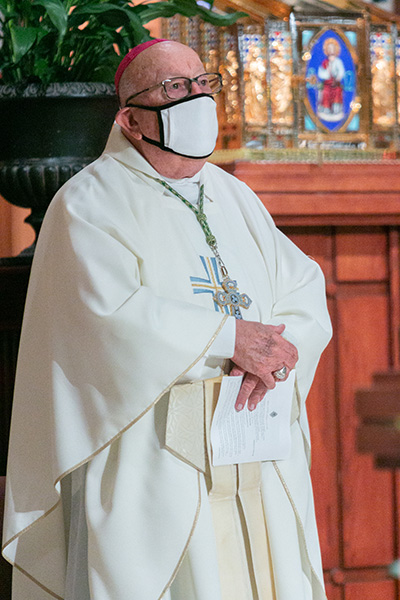 Certainly, being called to the episcopacy was a call to jump into the deep end of the pool. My life was changed in ways that even today I do not know if I fully appreciate. As bishop, you are called to undertake tasks that concern both the local and the universal Church; you are called to let down the Gospel net into the stormy seas of our time in order to obtain people’s adherence to Christ; to lift them, so to speak, from the brackish waters of death and from the darkness that the life of Heaven does not penetrate. You must bring them to life on earth, in communion with Jesus Christ.

We, bishops, are told that we are called to be a father and a brother to all whom God places in our care, especially our co-workers, the priests and deacons; and we are told to be especially attentive to the poor and the weak, the immigrant and stranger – the victims of today’s disposable culture and the globalization of indifference.

It is really an impossible job description. To be a bishop today is not what it used to be – people don’t necessarily give bishops the deference they once did. Our “standing” has been diminished by the increasing secularism of our society. But the sex abuse of children and vulnerable adults by a few – but always too many priests – and the bishops’ inadequate and uneven response was a self-inflicted wound.

The days when a politician would be afraid of a bishop’s criticism are long gone. Sometimes, they seek to goad us into saying something against them – because they figure it will help them more than hurt them. Bishops today, they would say, are like generals without any soldiers.

We are not embraced by either camp: on the left, because of our stance on abortion and our defense of traditional marriage, we are labeled “haters”; on the right, because of our advocacy for immigrants, we are told that we are just trolling for new people to fill our empty pews. But, as St. Paul says in today’s first reading, “Ã¢â¬Â¦the wisdom of this world is foolishness in the eyes of God.” So, rather than to seek the regard of the world, we chose to be “fools for Christ.”

Like they say, it's “lonely at the top.” People in leadership often are the target of hostility and unrealistic judgments – and the life of a bishop, despite busy schedules and activities, can sometimes seem lonely.

Yet, like Pope St. Gregory the Great and others who have served as successors of the Apostles, a bishop is never alone as he seeks to respond to his vocation to be a “servant of the Gospel of Jesus Christ for the hope of the world.” Our friendship with the Lord, nurtured in prayer, must always sustain us and strengthen us as does the prayer of our faithful and our priests.

It is a great comfort for me – and a source of grace and strength – that here in the Archdiocese of Miami, in every parish, each priest together with the faithful at Mass prays every day in the Eucharistic prayer , “for Francis, our pope, and Thomas, our bishop.”

And so, in good times and in bad, strengthened by faith and with the assurance that hope gives, at the Lord’s command, we “put out into the deep.” We let down our nets even in stormy and uncertain seas.

My episcopal motto is “All things to all men” (Omnia omnibus). It’s from St. Paul’s letter to the Corinthians. He explains that he became a Jew to the Jews, a Greek to the Greeks. In other words, all things to all – with the hope of at least saving some. I’ve tried to do the same – to be a Haitian to the Haitians, a Cuban to the Cubans, and Puerto Rican to the Puerto Ricans, etc. Omnia omnibus – it's about trying to save some souls – and, hopefully, in the process to save my own.

Archbishop Favalora, thanks for ordaining me 23 years ago. And, thanks for your support over these 23 years. When I celebrated my 10th anniversary as a bishop, the Archbishop was there in Orlando; when I celebrated my 20th, he was here with me at St. Mary’s Cathedral. I’m looking forward to seeing you, Archbishop, at the 25th and the 30th, and hopefully the 40th as well. And that goes for the rest of you too! 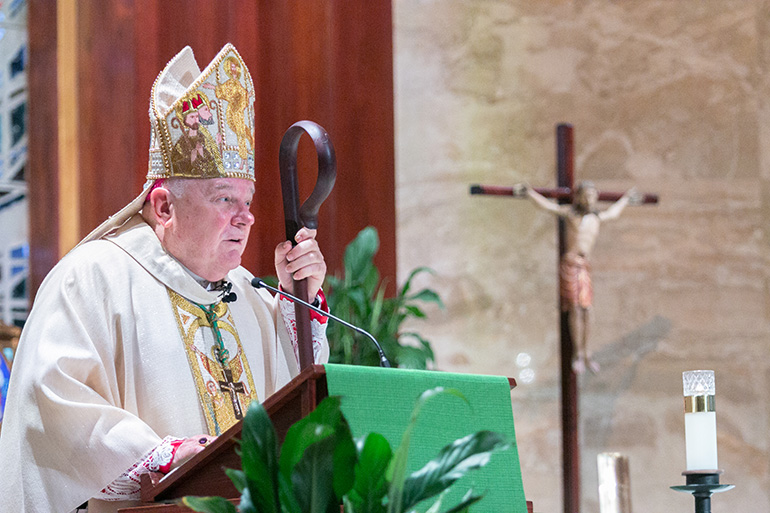 Archbishop Thomas Wenski preaches the homily while celebrating Mass on the 23rd anniversary of his ordination as bishop, Sept. 3, 2020. The Mass was celebrated with Pastoral Center staff at St. Martha Church, Miami Shores.