Sto lat! Sto lat! Niech zyje nam. This is the Polish version of “Happy Birthday” – May you live 100 years! On May 18, 1920, one hundred years ago in Wadowice, Poland, Karol Wojtyla was born. Karol Wojtyla, better known to the world as Pope John Paul II, was the pope of the millennium and perhaps the most significant figure of the 20th century.

His legacy of clear and confident teachings will continue to enrich and inspire the Church for centuries to come. His constant exhortation, “Be not afraid,” has inspired Catholics everywhere, especially the young, to “put out into the deep” and embark on a New Evangelization in a stormy and uncertain world. 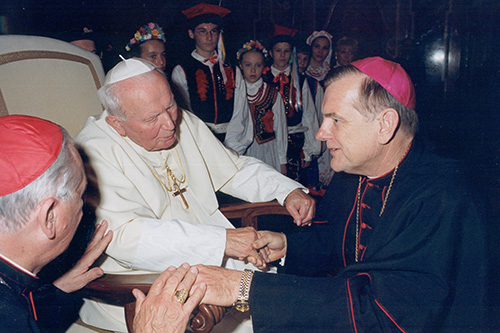 Archbishop Thomas Wenski chats with Pope John Paul II during a visit to Rome with a Polish pilgrimage group in the early 2000s.

As a bishop he attended each of the sessions of the Second Vatican Council. As pope, through his many writings and sermons, he outlined and promoted the Council’s authentic implementation, emphasizing the universal call to holiness of all the faithful, an anthropology open to transcendence, and what could be called “the theology of the gift,” that is, happiness and the fulfillment of man’s deepest aspirations is found not by seeking self but through the gift of self.

By fearlessly preaching the Gospel, “in season and out of season,” he embraced the world convinced that the Church would be faithful to her mission neither by fleeing from the world nor by surrendering to it but by engagement with the world. His was the path of dialogue. The Church, he was convinced, had something to say, a Word to share. And that Word was Jesus Christ. On the first day of his pontificate in October 1978, he began by challenging the Church and the world: “Be not afraid to open the doors to Christ!” He was not an uncertain trumpeter: because of his witness, because of his courage, doors were not only opened but walls came tumbling down (cf. Joshua). His visit to Poland as pope in the summer of 1979 set in motion the forces that would bring down the Berlin Wall in 1989.

A man of many gifts, John Paul II brought to the papacy great human qualities and profound spiritual virtues. He was an intellectual who nevertheless could preach with the common touch of a parish priest. He was a man of great discipline, exercising almost superhuman control of a frail and sick body to continue his mission and to be present to his flock. He was also a man of prayer, able to summon deep powers of concentration and recollection in order to contemplatively and mystically commune with God.

Throughout his 26 years as pope, he never tired of placing before us the radical demands of the Gospel and he urged us not to be afraid to embrace them. By exhortation but also by example, an example given even with much pain and suffering, he reminded us that for a Christian “it would be a contradiction to settle for a life of mediocrity, marked by a minimalist ethic and a shallow religiosity.”

He canonized more saints than any pope in history to underscore the fact that it is holiness which expresses best the mystery of the Church. Holiness is, he taught us, “a message that convinces without need for words and is a living reflection of the face of Christ.”

In his youth, Karol Wojtyla was an athlete and a sports enthusiast. It would be curious to know what he thought of the new “extreme sports” now popularized on TV: “extreme” golf, “extreme” skiing, etc. As one pundit said shortly after he died: This Polish pope invented a new sport: “Extreme holiness.”

But for St. John Paul II, holiness was not just a pastime; it was the pursuit of his life. And it should be ours as well.