March 19: Let’s delve into the figure of St. Joseph 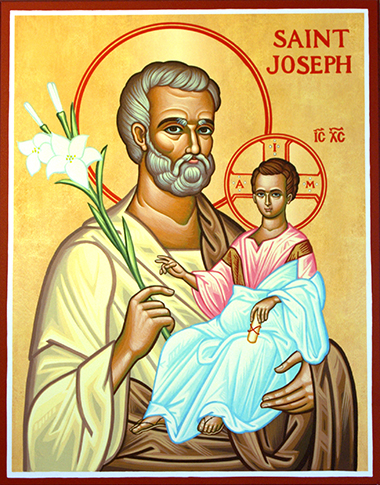 This icon of St. Joseph is in the sacristy at St. Katharine Drexel Church in Weston.

The religious store windows at St. Rose of Lima, Miami Shores, show old-style themes, but with modern faces. Here's a rendering of the Holy Family.

"I want to go to this seminar on St. Joseph, because I know little about him.”

This phrase, spoken by a catechist a few days before a symposium we attended on the saint, organized by the Congregation of the Oblates of St. Joseph, in Lima, shows how much remains to be taught about Mary's husband and Jesus' foster father. We could say that his role is not just a great unknown in the Gospels, but also in the life of the Christian, in the classrooms and in the meditations of priests.

These observations are important, because one must look beyond a personal devotion to St. Joseph. It is good to get closer to him, and study him more deeply, since he is a great model for parents, educators and even for those who, like him, seek a happy death, having the joy of dying in the company of Jesus and Mary.

The Fathers of the Church, especially St. Bernard, expressed a very accurate theology about St. Joseph, based on the Gospel of St. Matthew, emphasizing particularly his irreplaceable role in the incarnation of Jesus. The tradition of the Church has given a prominent place to the patriarch, which can be seen in the many prayers and paintings invoking and depicting St. Joseph, whether during the birth of Jesus, always with Mary, and also as the chosen one of time, carrying the flourishing branch of Jesse or working in his workshop.

This branch should not be confused with a decorative flower that is wrongly painted on the side of works of art. In this regard, Father Tarcisio Stramare, an Italian biblical scholar and the greatest living Josephologist, gave an explanation years ago to Zenit. "The staff is the blossoming branch of the almond tree that God brought forth to elect the high priest Aaron as custodian of the Tabernacle in Numbers 17:16. Now, it is Joseph whom God has directly chosen as the 'keeper' of a more precious tabernacle, which is Jesus; and he himself tells us that the incarnation has come.”

Which is why it is important to go deeper into the documents and homilies of the popes and other theologians on St. Joseph. We may recall the Apostolic Exhortation "Redemptoris Custos," of St. John Paul II, as well as the inspiring homily of Pope Francis at the Mass inaugurating his pontificate, among other texts.

Something that can help to highlight the figure of St. Joseph and bring him closer to the daily life of students and their families, is the celebration of the few but significant feasts that the Church has dedicated to him over the centuries.

A Mass or Liturgy of the Word, and even a novena, would be ways of honoring his fatherhood and his divine election as part of the history of salvation. If we add to this a publication, a talk, or a "fan page" on Facebook, there is a chance the interest and devotion to this most just saint will grow.

Although the ancient memorial of the Marriage of Joseph and Mary is no longer included in the liturgical Ordo, this does not mean that the protection of families could not be commemorated every January 23rd. The dates that do stand out in the annual calendar are March 19, possibly established by Gregory XI in the 14th century, and set as a solemnity by St. Paul VI in 1969.

Also, the fond memory of St. Joseph the Worker allows us to reflect on the meaning of Christian work every May 1st. That date is appropriate to ask for his intercession for those who work for a living, so that they do so in a climate of inalienable duties and rights, as taught by the Social Doctrine of the Church.

FASCINATED BY THE SAINT

But what is it about this ancient patriarch that fascinates humanity so much? Why do so many people carry his name, and not only men? Do we ask ourselves how capitals, regions, avenues and squares came to be given that name over the centuries? It is not by chance that buildings, convents and even public hospitals are named after St. Joseph. We do not need to expound on this by citing all the homage entailed in naming sports clubs, food products and even universities.

While consistently reviewing the Gospels, we find so little about Joseph that we remain intrigued by the role God gave him in the history of salvation. It is a truth that attracts, the fact that he was chosen among thousands of Jewish men, and such exclusivity already gives him the weight of the chosen, therefore a blessed of God, something that is also very common in other religions when they refer to a prophet or enlightened one. 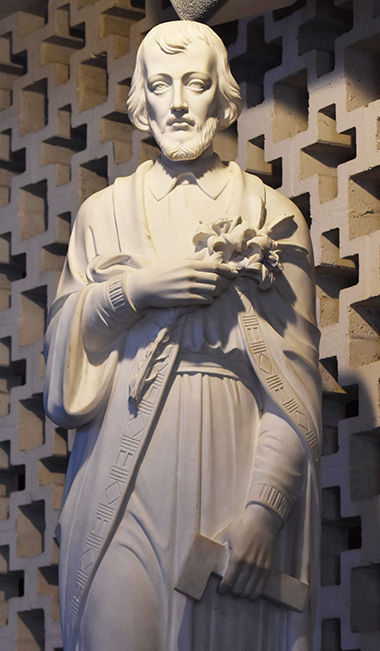 Statue of Joseph is on the other side of the chancel at St. Rose of Lima Church, Miami Shores. The hammer in his left hand shows his vocation as a carpenter.

It is also a fact that his silence, humility and obedience are characteristics of the saint that even today challenge the believer, and in many cases shake all assurances and certainties in the idea that the world is "subdued" by force, by imposition or by being the one who screams the loudest. During these times some see, with increasing frequency, obedience as a sign of weakness, so they challenge and question authority or seek its unreasonableness. This is why the virtues of St. Joseph, highlighted in the Gospels, could help to better cement the foundations of anyone who wants to have a good career without trampling on others or cursing the fact that he has yet to become a boss.

In view of this need to "go to St. Joseph," the bishops of some dioceses in the United States and other countries are to be congratulated for announcing the proclamation of a "Year of St. Joseph." This will make it possible to highlight his figure, to understand the path that his footprints have left behind and — of course — to become a better devotee. It is to be hoped that other dioceses could take this type of initiative, or other novel ones, to continue giving St. Joseph his place, from which he protects the world from greater dangers.

It cannot be ruled out that, given the great trust that Pope Francis has in St. Joseph — to whom he entrusts his most precious projects so that, in his own words, he "dreams them" — he will soon announce a Josephan year to entrust him with the problems of the world, which now really are causing nightmares for humanity.

Finally, there are those who consider it necessary to proclaim a dogma about St. Joseph, in order to better define him and to avoid legends or stories of the Apocrypha. But that precipitates a new debate, which could begin as of right now...

The writer is a journalist in Peru

Irena Lathrop - 03/20/2020 09:56 PM
Thank you for posting an English translation of the original article. It is quite fascinating to read, and hopefully, many more of the Faithful will consecrate their families, husbands , sons and lives to St. Joseph.

Irena Lathrop - 03/18/2020 07:05 PM
Is this article available in English? The Italian and Polish Catholics have a great devotion to St Joseph. Please, think of all Catholics when honoring St Joseph.