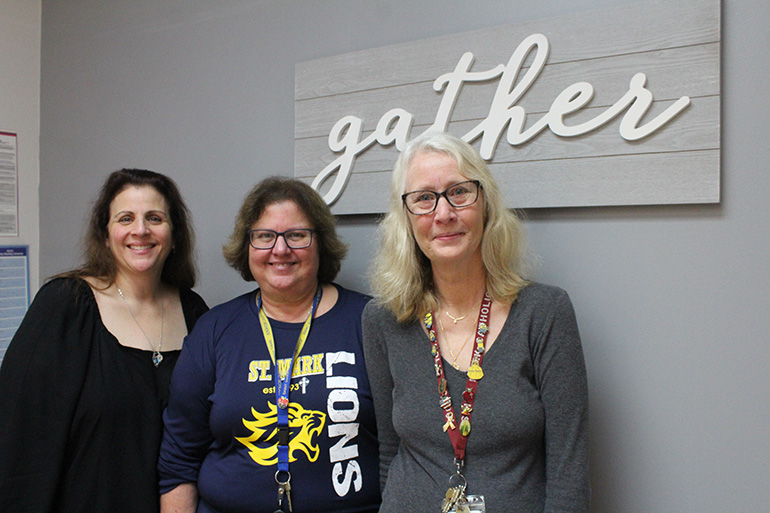 Love where you work, work where you love: Donna Villavisanis, Aida Kouri and Carol Thuijs have worked at St. Mark School and Church since the community was founded 25 years ago. Not only have they worked there, but their children and some of their grandchildren have also attended the school.

SOUTHWEST RANCHES | One story, one building. One classroom, one grade. This is how St. Mark the Evangelist School started out, according to teachers, faculty, and families who were present at its beginning in 1995. 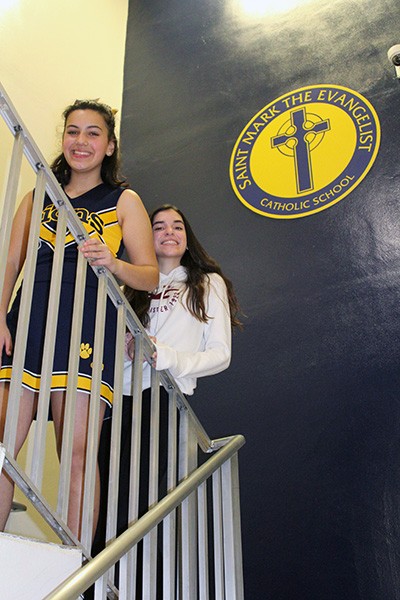 St. Mark the Evangelist School seventh graders Olivia Perez and Katherine Cue pose in one of the stairways of the school. Olivia and Katherine worked together to create a video history of their school, now celebrating its 25th anniversary, which was screened at the school gala held Jan. 24, 2020. 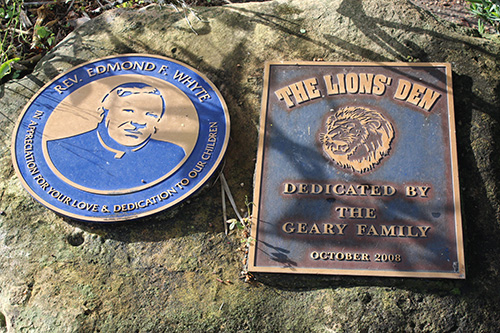 A plaque dedicated to Msgr. Edmund Whyte lies outside St. Mark School's basketball court, accompanied by a plaque of the Geary family. In 1996, Msgr. Whyte was assigned to St. Mark and oversaw the construction of the church as well as Archbishop Edward McCarthy High School next door. He simultaneously served as its supervising principal from 1996 to 2004. 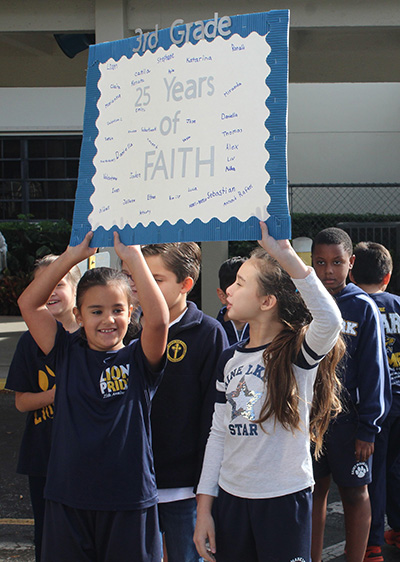 Two St. Mark School third graders hold up a poster signed by all of their classmates, celebrating the school's 25th anniversary. On Jan. 24, 2020, students celebrated their school and also kicked off Catholic Schools Week with the first pep rally in the school's history. 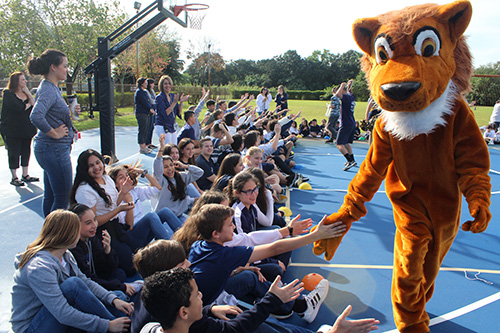 Here comes the Lion: St. Mark School's mascot hands out high-fives during the first pep rally in the school's history on Jan. 24, 2020. The celebration coincided with the school's 25th anniversary, and also kicked off Catholic Schools Week. 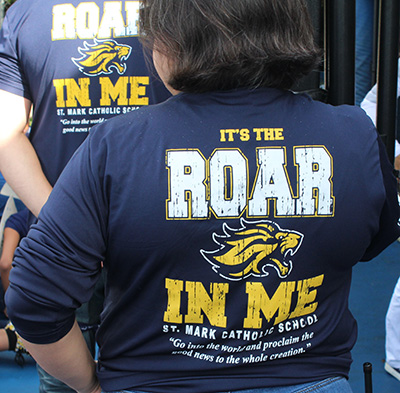 Teachers and faculty members wear "It's the Roar In Me" T-shirts during a pep rally celebrating St. Mark School's 25th anniversary on Jan. 24, 2020. 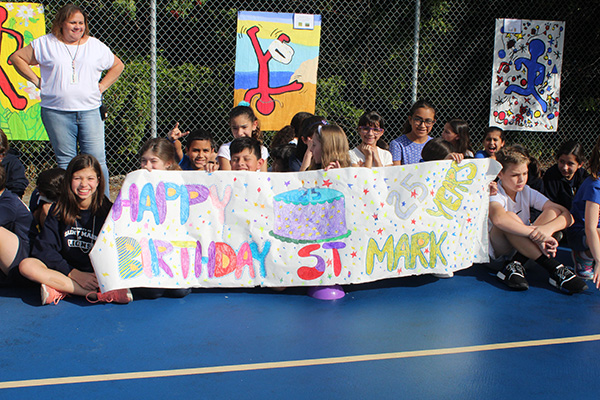 Students wish St. Mark School a happy birthday during the first pep rally in the school's history on Jan. 24, 2020. The celebration coincided with the school's 25th anniversary, and also kicked off Catholic Schools Week. 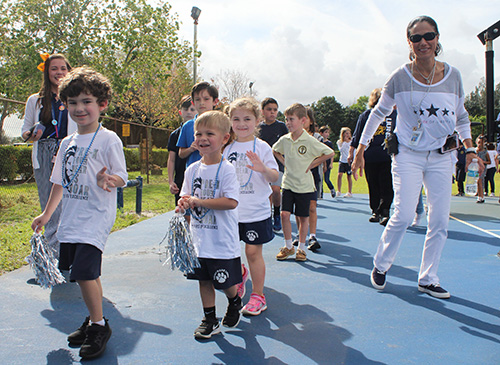 Now, the school building is more of a U-shape, with several classrooms and facilities, a full PreK through eighth grade curriculum, and even a sibling high school, Archbishop Edward McCarthy, next door. While the school building now is only two stories, it houses thousands of stories and memories to go along with its 25 years.

“Our saying for this year has been ‘Remember the past, celebrate the present, and look forward to the future,’” said Teresita Wardlow, only the second principal in St. Mark’s history. She followed founding principal Shirley Sandusky, who served for 20 years.

“Mrs. Sandusky built a beautiful start to the school, and I’ve been given the privilege of just moving it forward,” said Wardlow.

On Jan. 24, the school celebrated its silver jubilee with a pep rally, the first one in its history.

“We realized we had never had a pep rally that included everyone,” said eighth grader Alexandra Scott, a member of the student council which organized and coordinated the event.

Students faced off against teachers in games of musical chairs, a sneaker relay race, and more. They also had a band, cheerleaders, and a lion mascot to rally school spirit.

“She was principal up until I was in second grade,” said Olivia. “I hadn’t talked to her in a long time. It was really cool to hear her part of it from the beginning. She really started from scratch.”

The rural town of Southwest Ranches was not yet incorporated when groundbreaking for St. Mark School took place. Construction had not even started on the present-day church building, so a parish center housed all church activities as well as the school’s.

“It was very grass roots. Everybody knew everybody,” said Donna Villavisanis, director of religious education at St. Mark Church.

“It was known as ‘kids’ country,’ just PreK for the first two years. It was very small and we knew all the children. Then, every year they added a grade,” said Aida Kouri, a second-grade aide at the school.

“The first graduating class was in 2002, and McCarthy was just opened. All of the St. Mark graduates went next door,” said Carol Thuijs, a former PreK3 and PreK4 teacher who is currently a bookkeeper at the school.

During their time working at St. Mark, Villavisanis, Kouri and Thuijs all had children — some even grandchildren — who attended or are attending the school.

“This school has always been a place where everybody can make connections, whatever the need might be. We help each other in times of need, good and bad. Babies, weddings, funerals, everything,” said Villavisanis.

That support rang true for her when her son was diagnosed with cancer at the age of nine. Before the family left for New York for treatment, she feared that people would forget to pray for them. Not only did the St. Mark community pray, but they held walk-a-thons and fundraisers, made T-shirts, and sent packages and letters to the family on a daily basis.

Villavisanis’ son beat cancer. Years later, his oncologist was invited to his confirmation, and Villavisanis remembers the way St. Mark’s pastor at the time, Msgr. William Hennessey, acknowledged the doctor.

Caitlyn De La Fe was in eighth grade when she was admitted to St. Mark School. She was the oldest of six, and prior to admission, the family had been waitlisted a few times. By the time her siblings were admitted, she was in the eighth grade, and her parents hesitated about enrolling her. They ultimately decided it was best to keep all the siblings together in one school.

Going to a new school for just one grade, De La Fe imagined she would feel out of place, especially since many of her classmates had grown up together. Quite the contrary. “Everyone was so welcoming. I made friends that have lasted a lifetime from just that year,” De La Fe said.

She even met her future husband, Gustavo, on the first day of school.

“I specifically remember him coming up to me in the cafeteria and introducing himself. He said, ‘Hi! My name is Gus,’ and I remember him sticking his hand out to give me a handshake,” she said.

Both attended McCarthy High next door and stayed local for college. She went to Florida International University in Miami, he to Florida Atlantic University in Boca Raton.  Although their routes were different, they kept bumping into each other. After college they started dating, and eventually married.

They now have a daughter, baptized at St. Mark, where Caitlyn serves as coordinator of parish life, and Gustavo as youth minister.

Pre-K4 teacher Michelle Davis will tell you, “You have to love Pre-K to do Pre-K.”

She has taught Pre-K4 for 24 years, all at St. Mark. She has seen the curriculum and requirements change over the years. Now, kids are exposed to sight words, counting numbers up to 100, counting by twos and 10s, a weekly reading, and more. But, she insisted, “Play time is a must every day.”

“I love this age group. They learn so much from beginning to end,” Davis said.

Her mom, Virginia Castagne, was also fond of watching the children grow. At 80,  she began volunteering at the school library. She laminated, learned how to use a computer, read to students, and assisted in any way she could.

Castagne died at 97, but her smile is immortalized in a photo plaque that hangs in the school library.

For St. Mark School’s 25th anniversary, Davis has decorated the wall outside her classroom with photos of former and current students, faculty, priests, and even a picture of her mom with Santa. Davis said she can’t imagine working anywhere else.

“I’ve seen it grow. Everything. The classrooms, the library, the technology. But one thing that stays the same is that it’s family, and it’s in my heart and in my soul. St. Mark’s is ... me.” 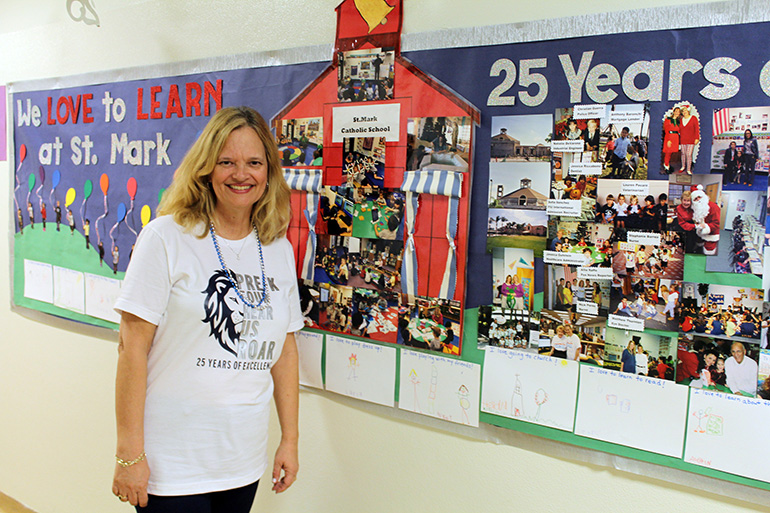 As PreK4 teacher for 24 years, Michelle Davis has helped lay the foundation of education for the smallest at St. Mark School, which is currently celebrating its 25th anniversary.

Liz Lantigua - 02/14/2020 04:51 PM
St. Mark School and parish is family! Our three daughters started in Tween (PreK) and graduated from the school. They are now 26, 24, and 19. Our oldest is the parish Respect Life Ministry Leader and the others work actively in that ministry. Although graduated, we all continue working and growing in our parish. We feel Blessed!

Lisa Dodge - 02/13/2020 10:03 AM
My son attended St Mark for 9 years and my daughter started in PREK3, They all had wonderful teachers and my daughter was lucky enough to have Mrs Davis. I volunteered for many years in the HSA and eventually had the opportunity to teach at this wonderful school. I am so happy to have been part of this family and love the direction the school is taking. Keep up the great work LIONS>

Other News from St. Mark School