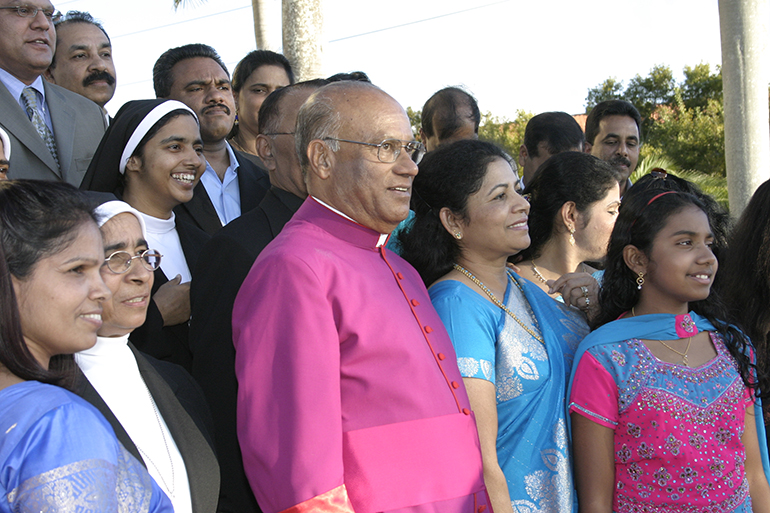 Msgr. James Parappally poses with members of the Indian Catholic community after the investiture ceremony for newly named monsignors, March 2, 2008. He was the first Indian priest to be made a monsignor in the archdiocese.

MIAMI | Msgr. James Parappally, former pastor of Our Lady of Mercy parish in Deerfield Beach, who also founded the mission that would become Our Lady of Health Syro-Malabar Church in Coral Springs, died Nov. 21 in his native India, at the age of 85.

Funeral services are scheduled for Monday, Nov. 25, in the state of Kerala, where he had returned after retirement.

He had been a priest for 60 years, 25 of those in the Archdiocese of Miami. In 2008, he became the first native of India to be named a monsignor in the archdiocese. 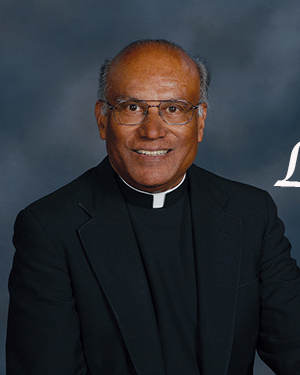 “It means a lot to me because I’m happy with my priesthood and happy that my priesthood is recognized,” he told the Florida Catholic at the time. “This has boosted me to do more for the Lord.”

“Msgr. Parappally is remembered for his diligence to the homebound, infirm and sick, especially those in hospital and nursing care,” said Father Kenneth Whittaker, who succeeded the priest as pastor of Our Lady of Mercy.

During his years at the parish, from 2003 to 2010, Msgr. Parappally sought to build up the community by serving the large Catholic population in Century Village and the various assisted living facilities in the area.

“He scheduled Masses at the various locales and worked to celebrate Masses as close to the facilities as possible,” Father Whittaker said. He also completed a capital campaign to upgrade the church facilities, including the church entrance, vestibule, parish hall and parish offices.

During his time in South Florida, and after his retirement, Msgr. Parappally dedicated himself — and any savings he accumulated — to the construction and administration of a hospital back home: the Great Jubilee Memorial Hospital in Kuttanad, a region in the state of Kerala. He explained why in an article published Jan. 10, 2002 in the Florida Catholic.

“My mother died of pleurisy at the age of 54 and my father died of cancer at age 64. Neither of them was alive to attend my first Mass. This has been a source of sadness throughout my priestly life,” he told the newspaper. “I have seen many of my closest friends and relatives die prematurely. I have seen the agony and pain of women during difficult childbirth with no skilled attendants. I have seen children suffer and die from diseases that are not even life-threatening in the Western world.”

Throughout his years in the archdiocese, parishioners continually described Msgr. Parappally as a hard worker.

“The hardest working priest I’ve seen,” Earl Jensen told the Florida Catholic in that 2002 article. A retired IBM engineer, Jensen had traveled to India with Msgr. Parappally in 2001 to help him set up the hospital.

“He’s a very hard-working, honest and sincere father,” said Aleyamma Simon Pallikunnel, a member of the Indian Catholics Association, who spoke to the Florida Catholic when the priest was invested as a Prelate of Honor to His Holiness — given the monsignor — in March 2008.

Our Lady of Health Syro-Malabar Church also began thanks to the hard work of Msgr. Parappally. According to the history posted on its website, the community began in 1984 with six families. In 1986, it became an archdiocesan mission to the Indian Catholic population with Msgr. Parappally as director.

By 2002, the Indian Catholics Association had grown to more than 400 families from all over South Florida. The community purchased a Baptist church in Coral Springs where they celebrated monthly, at first, and then weekly Sunday Masses in the Syro-Malabar rite.

Syro-Malabar is one of the Oriental churches in communion with the pope in Rome. It dates to the East Syrian liturgical tradition and St. Thomas the Apostle, who evangelized the Malabar coast of south India — the present state of Kerala — in 52 A.D.

In December 2003, Our Lady of Health became an independent parish under the auspices of the Syro-Mylabar Catholic Diocese of Chicago.

Msgr. Parappally was born July 9, 1934 in Edathua, Kerala, India, and entered the seminary in 1950. He was ordained March 14, 1959 for the Diocese of Changanacherry in Kerala. He obtained a licentiate in social sciences from the Gregorian University in Rome in 1964 and a master’s in sociology from the University of Loyola, Chicago, in 1967, followed by master’s degrees in education and economics from De Paul University, Chicago. From 1972 to 1983, he lectured in economics at St. Berchman’s College in Changanacherry.

After spending a year in New York, he arrived in South Florida in December 1984, and in January 1985 began serving at St. Gregory parish in Plantation. He remained there until 1992, when he was named parochial vicar at St. Clement in Wilton Manors. In 1995, he was named parochial vicar at St. Gabriel in Pompano Beach. In June 2003, he was named administrator of Our Lady of Mercy, and pastor a year later. He was incardinated — became a priest of — the Archdiocese of Miami Dec. 4, 1989, and retired from fulltime ministry Nov. 1, 2010.

Articles(6)
Our Lady of Mercy Church