'Would God allow me to do this?' 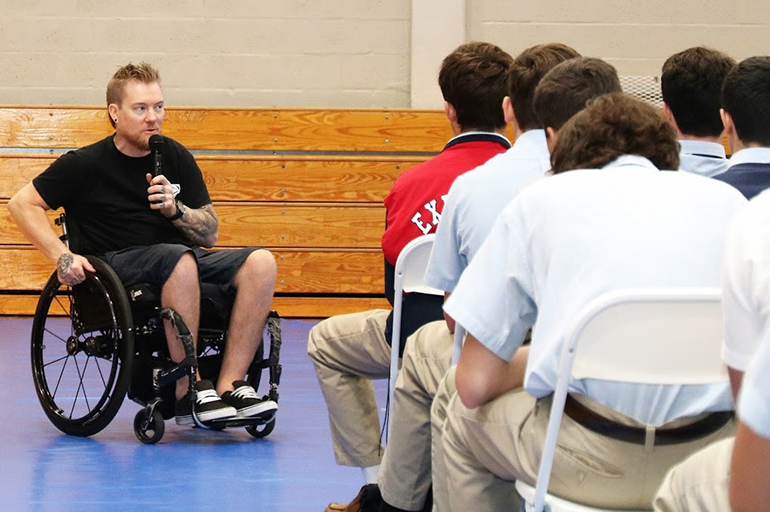 With the help of two clubs - Students Together Against Negative Decisions (STAND) and Students Against Destructive Decisions (SADD) - the freshman and sophomore classes at Christopher Columbus High were able to attend a lecture on campus from national speaker Kevin Brooks. Brooks spoke about many important topics that affect today's youth like impaired/distracted driving, suicide prevention, depression, bullying, relationships, peer pressure, and coping with guilt, tragedy and stress.

MIAMI | Throughout the year and especially as prom and graduation season unfold, Christopher Columbus and St. Brendan high schools are educating students and parents alike on the destructive consequences of consuming alcohol and drugs and —increasingly— vaping of electronic cigarettes.

Both schools have chapters of Students Against Destructive Decisions and conduct hair-based drug testing, with one shot at rehabilitation. With robust campus ministries, they support students spiritually to obey the law and make healthier decisions, debunking the notion that dangerous experimentation is some rite of passage to graduation.

Columbus senior Presley Pomeranc helps lead the school’s SADD chapter. He has spoken publicly to classmates about his shattered sense of invincibility and shared a message of personal responsibility born of tragedy: As a group of impaired youths left a party last May, his best friend died in a car crash.

In January, the aspiring lawyer approached Columbus Principal David Pugh. “All the different things that are coming out nowadays, kids don’t even know what they’re doing,” Pomeranc said. “I want to inform my younger brothers, basically, look what happened to me and my best friend, look what can happen to you if you guys aren’t safe and you don’t even know what you’re doing.”

Pomeranc, who is Jewish, found healing at a recent Columbus retreat while meandering through a maze. “You don’t know where you’re going and in the entire maze I was reciting one prayer. And the prayer was, if you’re scared, if you’re worried, if you’re anything, keep God here and you’ll be safe.”

The question young people should ask before doing anything, he said: “Hey, would God allow me to do this?”

As an added deterrent, Pugh reported that all 1,700 students have been drug-tested every school year for the past eight. Students know the drill: When given a ticket in homeroom they report to the conference room. Then a teacher snips hair and sends it off for testing. Drugs can be detected in the system for up to 100 days.

Columbus this year also featured national speakers Bobby Petrocelli and Kevin Brooks. They explained vaping to parents and the noxious effects of alcohol and drugs on the developing brain. 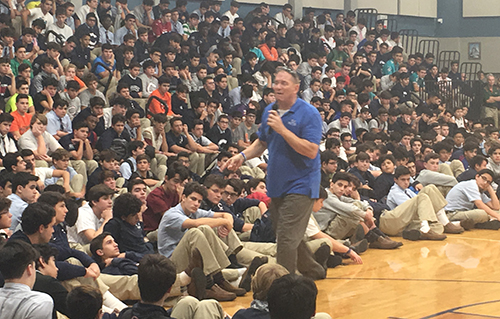 Christopher Columbus High School's new chapter of SADD (Students Against Destructive Decisions) and the James Villa Foundation helped to bring national speaker Bobby Petrocelli to Columbus. Petrocelli, a teacher/coach who lost his wife to a drunk driver and became a leading motivational speaker and author, spoke to Columbus' entire student body in October.

“You show them that scientifically, the brain is still developing until age 24, and anything that you put into your body, that affects your brain. Kids learn from that,” said Pugh, a former guidance counselor in his 21st year at Columbus. “The only way really to tackle these things that are happening in today’s society is to not turn away from it, not to act as if it doesn’t exist. The only way to really tackle it is to educate.”

The biggest increase has been in “vaping” with electronic devices containing nicotine, such as Juuls. The Monitoring the Future survey conducted by the National Institute on Drug Abuse found that 37.3 percent of 12th graders vaped in 2018, jumping from 27.8 percent in 2017; 29.7 percent had vaped nicotine, 25.7 percent “flavoring alone,” and 13.1 percent marijuana. Even 17.6 percent of eighth graders vaped last year.

“I tell these kids all the time these companies are preying on the youth and making it seem like this is a perfect way to wean people off nicotine when in fact they are really going after the young people,” said Pugh.

Pomeranc believes that many think the e-cigarettes are harmless. “But people don’t know the long-term effects of what can happen or even what’s in it,” said the senior. “We need to warn people.”

At neighboring St. Brendan High School, director of counseling Ivette Alvarez holds quarterly guidance nights for parents of each grade. Youths are encouraged to engage in extracurricular activities. Parents are urged not to allow their teens to wander off campus after school.

“I find that sometimes parents are just scared to lay down the law and say, ‘Hey, this is what I expect,’ and then they lose their kid in the process. So don’t be afraid to talk about what the rules are. Be open with them,” she said.

Her biggest concerns with freshmen and sophomores are vaping and addiction to social media, which can amplify peer pressure.

“They are always comparing themselves to whatever they are seeing out there on their devices,” she said. “If they could just put their devices down they could actually be experiencing more of their life.”

“We want them to be able to use technology for good and most of the times they are but sometimes it cripples them,” added Alvarez, now in her 27th year at St. Brendan.

Her biggest health concerns with juniors and seniors are drinking and ride sharing. She reminds parents that just because their teens are not going to drink and drive, that doesn’t make it OK. “If you’ve got a bunch of 14, 15 and 16-year-olds coming home at 1 a.m. in an Uber and you’re shocked when something bad happens, well you shouldn’t be shocked.”

In April, Alvarez counseled 350 parents on prom safety. “We discourage all after-prom activities,” she said. Although prom is a big night, she reminds them St. Brendan is a Catholic high school. “We’re not going down to Miami Beach to party. This is ridiculous but sometimes these kids think that they are part of some fantasy world. We try to talk to parents about the dangers of promoting that type of thing, that type of fantasy life that doesn’t exist.”

The good news is that alcohol and drug use has steadily declined, with 58.5 percent of seniors reporting ever trying alcohol in 2018, down from 81.7 percent in 1997. Supporting that trend, St. Brendan hosts weekly campus ministry nights and numerous retreats stressing the importance of putting God at the “center of everything” — including every social activity. The administration works closely with student council and campus ministry on conduct expectations.

Alvarez said she challenges every student: “I want what’s best for you and I want you to think about what God wants for you in your life before you make choices that can move you away from that.”

Ashley Prats, St. Brendan’s freshman class president, agrees. She said she finds strength for the journey in campus ministry. “I’ve made it a goal every morning to go to Communion service to get closer to God, to start my day off with something good.”

Hope Sadowski - 05/08/2019 10:22 AM
Give our children the tools they need to make the right decisions, Stop, Think, Proceed. Our children are exposed to so much out there and it is through good programs such as the ones described in this article that will help them make the right decisions. Every school should benefit from these information. Congratulation to Christopher Columbus High School and St. Brendan High School. Thank you.