The depth and breadth of God's mercy

At Mass for 60th anniversary of St. Pius X Parish 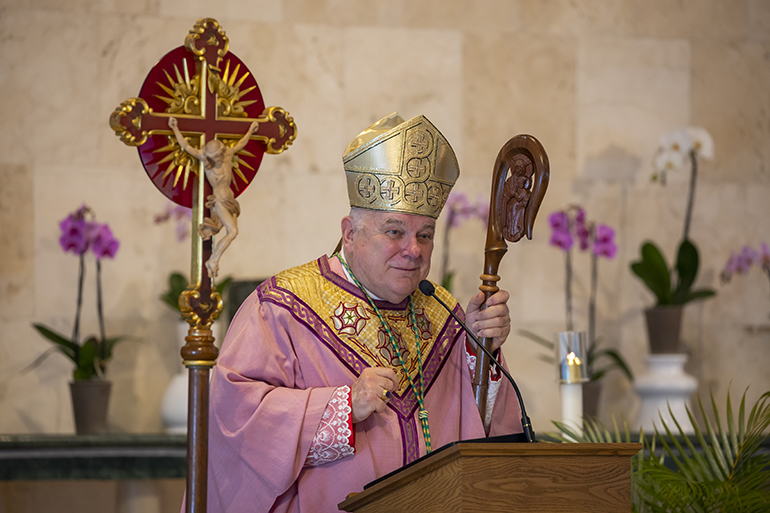 I’m happy to be here with you and your pastor, Father Biju (Vells). Traditionally the Fourth Sunday of Lent is called Laetare Sunday: Laetare is from the Latin and it means to rejoice. And today we rejoice and even though we are still in Lent we set aside the purple or violet vestments for rose ones as a sign of that rejoicing. We rejoice that Easter is drawing near, when we will celebrate again our rebirth in Christ who suffered, died and rose for us to have life and to have it abundantly. And, of course, we rejoice for the 60th anniversary of St. Pius X Parish. For a Church that’s almost 2,000 years old, 60 years might not seem like a big deal. But here in South Florida, where everything seems to have been built the day before yesterday, 60 years is something to celebrate – and celebrate we will.

But first, let us attend to the Word of God we have heard proclaimed today. The Gospel parable of the Prodigal Son touches our hearts – and it reveals to us the depth and breadth of God’s mercy, represented by the Father who hugs his lost son and tells his elder brother to rejoice with him because his brother has come back home.

But at the same time, it’s not hard to feel some sympathy for that elder brother who comes home to an unexpected party. The younger son – in asking for his share of the inheritance –basically told his father to drop dead. Like how cold is that? But after a life of debauchery, he becomes “homesick.” But the older son is mad – but perhaps not so much at his brother (he might have felt a little jealous of him) but at his father. After all, if he had already given half his inheritance to his younger son, then – in giving the younger son a new ring, new clothes and a big meal – the old man was giving away part of the older son’s inheritance. 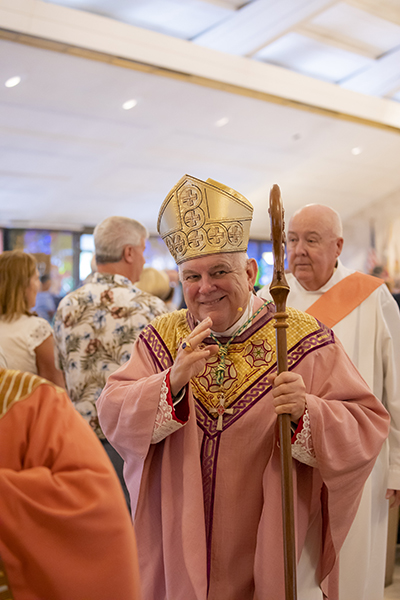 Archbishop Thomas Wenski greets parishioners at the end of the Mass celebrating the 60th anniversary of St. Pius X Church in Fort Lauderdale.

That younger son – in leaving his Father’s side – found himself in an inhospitable place – feeding pigs and hungry for their slop. In spite of the glitter that surrounds us, when we live our lives as if God didn’t matter, when we exile God from the center of our daily lives so that we rarely think of him or call him into mind, aren’t we “prodigals” and don’t we end up creating around us an inhospitable place where life becomes unbearable? St. Paul writes: “I was once a blasphemer and a persecutor and arrogant, but I have been mercifully treated...” These words also describe each one of us to one degree or another. And don’t we all know people who give God the cold shoulder, or who are angry with God, or who for any number of reasons choose to live in alienation and distance from God.

Those who are still out there in that “inhospitable place,” which is in that world in which God doesn’t matter, need to hear the Good News that God still loves them anyway, that he hasn’t forgotten them, that he is waiting for them to begin again by coming to him here at the Eucharistic banquet. No matter how far they come from, no matter how great the distance they have placed between themselves and God, if he sees them coming back home he will rush out, throw his arms around them, embrace them and bring them back into his House.

This coming weekend, every parish in the Archdiocese will have extended hours for confessions. That means, here – or at another parish, where the priest might not know you – by means of a good confession in the Sacrament of Penance, the tribunal of Divine Mercy, you can experience the loving embrace of God’s infinite mercy. The young son came to his senses – and homesick for his Father’s house – headed back home. The Sacrament of Penance allows us to “come to our senses” and promises us a warm welcome from the Father of Mercies.

Your patron saint, Pius X, was Pope at the beginning of the 20th century. Pope Pius X, who served at the beginning of the 20th century, began his pontificate under the motto of “Restoring all things to Christ.” His motto is prominently displayed in the sanctuary. He is remembered for his resolute condemnation of the heresy of modernism but also for allowing children as young as seven to take Holy Communion.

Pius X wrote: “that Christ may be formed in all, be it remembered that no means is more efficacious than charity.” He adds: “Ã¢â¬Â¦it is vain to hope to attract souls to God by a bitter zeal. On the contrary, harm is done more often than good by taunting men harshly with their faults and reproving their vices with asperity.”

Today in America, political discourse is increasingly filled with shrill polemics that generate much heat but little light. Oppositional research designed to uncover dirt about an opponent is seen as a legitimate tactic in the “contact sport” that is today’s politics. Such divisive partisanship perhaps is the way of the world; but it cannot be the way of the Church, for the way of the Church must be, as St. Paul told the contentious Corinthians, a “more excellent way,” the way of love (cf. 1 Cor 12:31-13:13).

A “bitter zeal,” rather than witnessing to the Truth, will undermine it. And instead of restoring all things to Christ who prayed that all his followers be one, bitter zeal will fracture the unity of his Body, the Church. Indeed, the cause of so many ruptures in the Body of Christ that resulted in schisms over the course of history can be traced to such “bitter zeal” among those who fancied themselves as “reformers.”

In a world that often resembles that inhospitable place of the prodigal son, this parish is like an oasis in the desert. Here, the people of God, for 60 years. have found rest on their journeys; here, through the celebration of the sacraments, they have been fed; here in the shared communion with their fellow Catholics they have grown in faith, hope and charity.

We thank those who have gone before us – the priests who have served in this parish, the parishioners who first built up these buildings and this community. May God reward them for their labors. And for you, the present-day parishioners of St. Pius X, may you witness to the Gospel zealously – but also with great love. If we reflect on this Gospel parable, we can see ourselves in the prodigal son; and, to be sure, we can see ourselves in his older brother. But as we journey towards Easter and the celebration of the Paschal feasts, may we also strive to see ourselves in the Merciful Father.