Laboring in the fields of the Lord 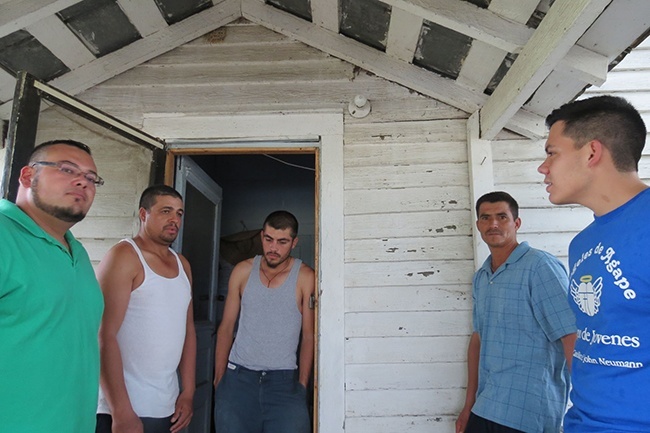 RICHMOND, Va. | Resting in the evening after 12 hours cutting tobacco in south-central Virginia, Juan Salvador talked about being a migrant farm worker.

The most difficult part, he said, isn't the long hours under the sultry July sun. Nor is it the six-day work week, the sweat and toxic fumes in the tobacco drying furnaces or living in a crowded house with 14 other men. 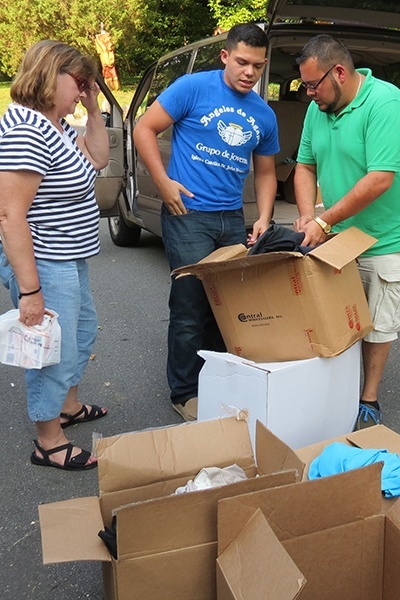 Miami seminarians Andres Pareja (right) and Nick Toledo select donated items to take on one of their daily visits with migrants. Local parishioner Mary Branisteanu, who coordinated collection, is at left.

No, the hardest part is being away for five months from his wife and four children in Guanajuato, Mexico. Fortunately, the Richmond Diocese serves workers like Salvador who come annually to the region during growing season.

Assisted by volunteer seminarians such as Andres Pareda and Nick Toledo of the Archdiocese of Miami, the diocese offers material help, plus spiritual aid.

The volunteers bring boxes of work clothing, caps, sunglasses, dishes and toiletries, letting the men take what they want. They offer to help fill out forms or write letters in English. They'll drive men to a hospital if they get sick. And they'll bring a priest to the camp if someone needs counseling or confession.

"We are comfortable talking with them because we know these are men sent by God," Salvador said. "We are so grateful to receive anything. We dont feel worthy to ask for such things."

Salvador is one of about 4,000 men who arrived this summer from Mexico and Central America, as well as Haiti. Besides tobacco, they harvest tomatoes and other soft vegetables that cant be harvested by machine.

The Richmond Diocese has been serving the migrants for more than 30 years, helping ease the stresses of poverty, separation from loved ones and often harsh working and living conditions. Since 2008, the diocese has welcomed bilingual seminary students from the Archdiocese of Miami, who volunteer their summers to help.

"They are invaluable," said Kathy Bredimus, a lay worker in migrant ministry in the diocese. "They understand the language and have the spiritual background to address some of the deeper concerns. Sometimes they are the first friendly face the people in the camps see after they come here."

"As lay people, we feel inadequate to bring the necessary spiritual care to the camps, but the seminarians can offer that," Bredimus added.

Over the years, the Archdiocese of Miami has sent several dozen seminarians to help Richmond, said Father David Zirilli, archdiocesan director of vocations.

"They find tremendous satisfaction in ministering to these migrant workers, getting to know them and their families, and hearing their stories," Father Zirilli said. "The seminarians come back saying that they receive more from the migrants than they give, and some have returned three or even four years in a row."

Justin Myers, who oversees migrant ministry for the Richmond Dioceses Office of Justice and Peace, said that each year he works with Father Zirilli to select seminarians who would be "a good fit." Five came this year, three assigned to the Eastern Shore and two to south-central Virginia. 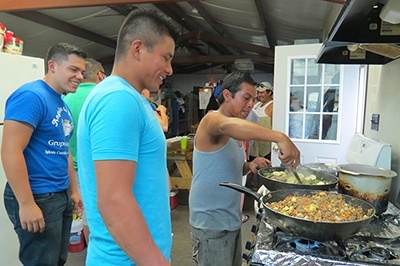 Pareda and Toledo, who are currently studying at St. John Vianney Seminary in Miami, spent eight weeks in the rural farming region around Clarksville and South Boston near the North Carolina state line.

During the summer, they lived at the rectory of St. Catherine of Siena Parish in Clarksville. The ministry was totally different from last summer, when they were assigned to parishes, working in the office and helping out with church activities.

After two orientation meetings in Richmond, they began a round of visits to two or "three" camps (usually a trailer or small former farmhouse) each evening.

It helps to drive the same van used by seminarians in previous summers. "It's helped us get off on the right foot with them," Toledo said.

Sometimes, the work is just about simple relationships, according to Pareda.

"We try to get to know them and tell them about our own lives," he said. "If you are going to minister to them, you have to let them see that we accept them for who they are and we don't judge them."

He and Toledo find that many of the migrants are away from the Church or have not been catechized.

"We want them to know the holy Catholic Church loves them," Pareda said. "The Church who baptized them, married them, buried their parents, cares for them.

Despite the orientation meetings in Richmond, the seminarians said they were still unprepared for the experience of meeting the workers and learning about their lives. The men are "abused every day" by the severe working conditions if nothing else, Pareda said.

Some employers treated their workers better than others, and some didn't always pay the men on time, he said. "For the most part, the farm owners dont really care about their personal needs."

But he and Toledo also saw the unselfish generosity of the migrants. When they brought their boxes of clothes and other goods, the men were frugal in what they took.

"They say, 'That's okay, we want to leave some for the others,'" Toledo said. "They are always concerned about the guys in the next house. Its a hard quality to find in people its a form of love."

Pareda agreed. "Here they are in poverty and struggling, but they are thinking about their brothers. When we would get back in the van there would be kind of an awkward moment of silence. I felt like it was God talking to me, saying thanks. It was Christ confirming that you are doing what hes asked of you."

This year, the visiting seminarians also helped the Richmond Diocese start a new initiative, holding leadership training courses in four parishes that serve the regions where the migrants work.

The course emphasizes Catholic social teaching, with an aim of finding leaders especially Spanish-speaking leaders to continue training and to form migrant ministry teams in the parishes.

"So many people here in the parish could help," Pareda noted, "but so far, there has been no initiative to go out and visit the camps. So we are showing them other ways, besides just giving a little money, that they can serve the people."

Both men have already said they want to return next year. They said that helping people in dire need lays a strong foundation not to mention inspiration for their potential priesthood.

"It sparks the fire in my heart to serve the poor," Pareda said. "In discerning my vocation, it is a way God shows me a path to holiness, not just for me but for these people Im serving. It is an opportunity to be an instrument of God to bring someone hope, to be one match light."

"If the Church is sending me to do this, I have to say yes," he added.

Denton is western correspondent for The Catholic Virginian 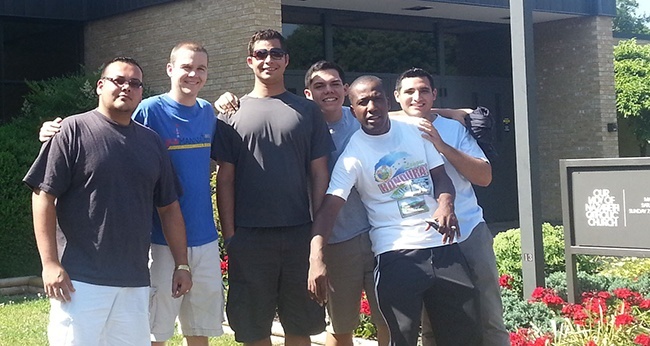 Miami seminarians at Our Lady of Nazareth Church in Roanoke, Va., where they picked up donated items to take and distribute at numerous migrant worker camps throughout the summer. From left: Miami seminarians Andres Pareja, Enzo Rosario, Nick Toledo, Remy Jeudy and Juan Suarez pose with Richmond seminarian Kyle OâConnor (second from left).