We pray at a particularly difficult time

“I came into the world as light, so that everyone who believes in me might not remain in darkness.” These words of Jesus, taken from today’s Gospel reading, both comfort and challenge you today as you come together as members of the legal profession and members of a faith community to invoke the assistance of the Holy Spirit at this annual Red Mass.

We seek a renewed outpouring of his seven fold gifts: wisdom, understanding, counsel, fortitude, knowledge, piety, and fear of the Lord. We also invoke the intercession of St. Thomas More, the patron saint of lawyers and public servants. May the example of this martyr, who professed to be “the King’s good servant but God’s servant first” inspire us, and may his prayers strengthen you and all members of the bar.

We pray at a particularly difficult time: the riots that have broken out in Baltimore remind us of the fragility of civilized order. Young people need roots provided by stable families and neighborhoods to grow up into productive citizens. Rootless (r-o-o-t-l-e-s-s) people can and do often become ruthless (r-u-t-h-l-e-s-s) people. 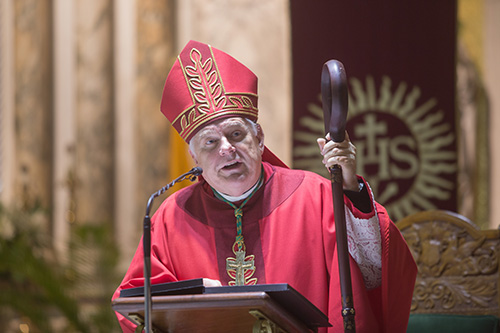 The sexual revolution of the '60s has wrought great harm: Out-of-wedlock births, sexually transmitted diseases, teen pregnancy, abortion and divorce have destabilized families, especially the families of the poor. And one could argue that the violence and anger on display in Baltimore this week represent a futile protest of those left behind by the rest of society as collateral damage.

And, of course, the sexual revolution with its confusion about what truly promotes human flourishing in society marches onward with the push for the acceptance of same sex marriages. Yesterday, the Supreme Court began hearing arguments to consider two things: Does the US Constitution require states to allow members of the same sex to marry each other; and does the Constitution require states to recognize marriages of same sex couples “legally” married in other states?

It is no secret that the Catholic Church â and not only the Catholic Church â opposes the “redefinition” of marriage that will become the law of the land if the Supreme Court decides in the affirmative, as it is expected to do. Our opposition is not based on bigotry or hatred towards anyone but, to quote Pope Francis, “same sex marriage is a threat to the family.”

Various religious leaders, including Archbishop Joseph Kurtz, president of the United States Conference of Catholic Bishops, issued last week an open letter entitled “The Defense of Marriage and the Right of Religious Freedom: Reaffirming a Shared Witness.” They argue, contrary to the “group-think” of the elites that shape our culture, that “the state has a compelling interest in maintaining marriage as it has been understood across faiths and cultures for millennia because it has a compelling interest in the well-being of childrenâ¦every child deserves the opportunity, whenever possible, to be raised by his or her own married mother and father in a stable, loving home...”

Obergefell v. Hodges, as the same sex marriage case before the Supreme Court is now known, could go on to be the Roe v. Wade of marriage. But, as with Roe, the Supremes will not settle anything â for Obergefell will only mark the end of the beginning of a long cultural drama.

Ultimately, one has to hope that nature will reassert itself. The “gender theories” that seek to legitimize same sex relations will end up in the dustbin of history as other intellectual fads have. Abraham Lincoln once said: “A cow has four legs not five. Calling a tail a leg won’t make it one.” And calling same sex unions marriages will not make them true conjugal unions.

At any rate, the redefinition of marriage will change every law involving marital status â and this will have serious consequences, especially for religious freedom which is the foundation for the exercise of all other human rights.

As a community of faith â but also as citizens â the first thing we must do is to secure our freedom to live out and pass on our own convictions on sex and marriage. Despotism can come in both hard and soft forms. St. Thomas More, beheaded for refusing to consent to King Henry VIII’s takeover of the Church, fell victim to a hard despotism. This type of hard despotism is decimating the Christian populations of the Middle East. But in this country and other liberal democracies, people of faith are being increasingly subjected to a soft despotism in which ridicule, ostracism, and denial of employment opportunities for advancement are being used to marginalize us. We see this when butchers and bakers and candlestick makers are being put into the legal dock for refusing to renounce their religious beliefs.

A new religious intolerance has established itself in our country â and it is being propagated by those who claimed to have been victims of previous instances of intolerance. Christian pastors are stalked and threatened for being “Christian” pastors, social scientists are expelled from universities for having turned up “politically incorrect” facts, charitable organizations and confessional schools are harassed if they take seriously their faith’s moral precepts and require their employees to support their missions.

Today’s reading taken from the 12th chapter of the Gospel according to John comes at the end of Jesus’ public ministry. You can say that, in this passage in a clear and succinct statement, Jesus gives us - in lawyer language - the “summary of the argument.” The major themes or motifs of the preceding chapters are condensed in these few words in which Jesus without any hemming or hawing asserts that salvation and judgment have come through him.

The image of the Jesus we encounter in this Gospel is certainly quite different than the image of Jesus popular today; that is, of a Jesus who demands nothing, who never scolds, who accepts everyone and everything â a Jesus who no longer does anything but affirm us.

But as a great theologian â who was once known as Cardinal Ratzinger and then as Pope Benedict â once said, “The Jesus that makes everything okay for everybody is a phantom, a dream, and not a real figure.” The Jesus of the Gospels, the Jesus that the Catholic Church preaches, is by contrast demanding and bold. If he was really accepting and tolerant of all things and toward all people, do you think he would have ended up murdered on a cross?