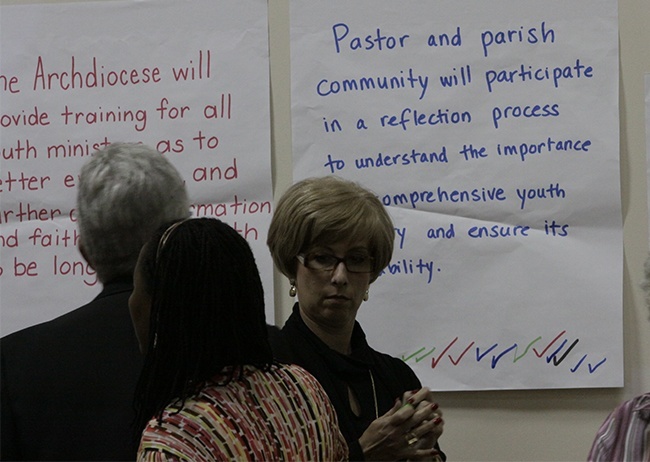 Members of the Synod focus team on youth ministry check off their priorities from among a number of options posted on the wall of the Pastoral Center cafeteria.

MIAMI | Winnowing thousands of concerns and hopes into a handful of specific, attainable goals is a daunting task.Â
But members of the Synod focus teams have been plowing through the mountain of suggestions since October, and a couple of teams have already scaled them down to actionable goals. 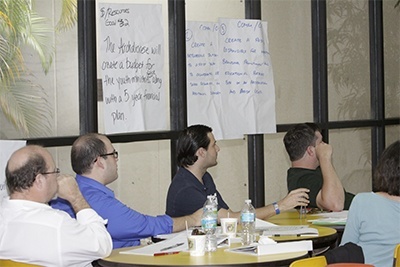 The liturgy team was the first to finish its task, with the teams on youth ministry, campus ministry and the permanent deaconate due to complete their work mid-December. There are 14 focus teams with more than 530 members in all.
What is all the more impressive is that the teams â composed of as many as 50 people in some cases â have to do their work over the space of three 3-hour meetings.
The fact that the work is getting done â and the Synod is on schedule â is due in large part to the skills and tools provided by the Catholic Leadership Institute, which is helping facilitate the process.Â
Although this is the first time the Catholic Leadership Institute coordinates an entire Synod process, its representatives are utilizing the same tools they teach priests in their âGood Leaders, Good Shepherdsâ program.
âThis is what they use in leadership training throughout the country,â said Rosemarie Banich, Synod director. âThey have customized it for the Synod.â 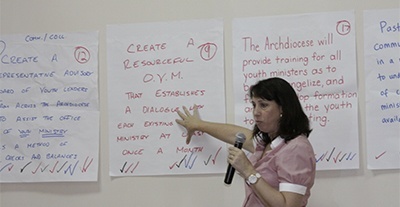 Synod director Rosemarie Banich summarizes the results of the votes summarizing the top three priorities of the members of the Synod focus team on youth ministry.

But Mother Adela Galindo, a member of the Synod leadership team, also credits the Holy Spirit.
âI kept saying, âLook at the Holy Spirit working,ââ said the founder of the Servants of the Pierced Hearts of Jesus and Mary as she and other leadership team members paused for lunch Dec. 11 at the Pastoral Center. They were sharing the cafeteria with members of the young adult ministry focus team who were about to start their second of three meetings.
Indeed, over the past two months, the Pastoral Center has turned into a way-station for the members of the Synod focus teams, who figuratively tag in and out each day.
âThree languages, so many cultures and everybody agreed on what were the main concerns and the main hopes,â Mother Galindo said, harking back to one of the earliest meetings of the dozen members of the leadership team, who have been gathering for an entire day once a month since May. The public listening sessions started in June.
When those sessions were over and the results were tabulated by the Synod staff, each of the leadership team members was given 300 cards, all different colors, each containing one hope and one concern voiced by participants at the listening sessions. They were told they had 10 minutes to look them over and decide whether the hope and concern were relevant or irrelevant.
âYou realized that what you thought was relevant was not as relevant as something else,â said Vilma Angulo, also a member of the leadership team.Â
âWhen we got together, 90 percent of the cards we had chosen were the same,â Mother Galindo said. âThen you had the responsibility of choosingâ five priorities.
âAll of us had at least four that were exactly the same,â said Angulo.
âWe hugged each other and said âwe made it!ââ Mother Galindo recalled.
Itâs a method of working that is being used, with the same results, at the focus team level. 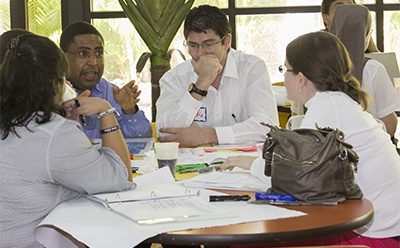 Members of the focus team on young adult ministry, already divided into sub-groups, work on winnowing down the hundreds of hopes and concerns raised at the listening sessions into a handful of actionable goals during the second of their three meetings.

âWe go in three months from a huge topic â young adult ministry, or even bigger, Catholic education â from that 30,000-foot level and in three months that group produces three very specific ground-level goals,â said Banich, who has facilitated more than half of the focus team meetings and also been present at all the leadership team meetings.Â
By ground-level goals she means they have to be âattainable in three years,â and attainable âin a way that we can measure,â said Mother Galindo.Â
An example of that would be setting a goal of increasing Mass attendance across the archdiocese by 10 percent in three years.Â
âWe cannot desire things that are going to take 20 years. So that was a challenge for us because we desire many things,â Mother Galindo said.
At the same time, said Angulo, âWe have to honor what the people of God in this diocese said.â
Also helpful is the fact that the leadership and focus teams are working along parallel lines, with the leadership team feeding off the suggestions of the focus teams.
The teams are composed of âpeople that are involved in the life of the Church, serving in this area. They can inform us all because theyâre there, in the field,â said Mother Galindo.
âItâs just neat to be involved in the process,â said Bryan Garcia, a seminarian who serves on the young adult ministry team.Â
He is about halfway through his nine-year formation process, serving his pastoral year at St. Louis Parish in Pinecrest. âAs a seminarian, if Iâm studying to be a priest in this diocese, this is going to affect me and others in the future,â he said.
After sitting at the table with Mother Galindo and Angulo, Garcia did note an overarching theme that came through at the two listening sessions he attended, especially when the speakers were youths or young adults. âSo many were talking about the same thing â the desire to be involved, the desire to be connected,â he said.
So perhaps winnowing down a mountain of suggestions into a handful of priorities is not as difficult as coming up with specific, attainable goals for satiating those desires â the final step for both focus team members and, ultimately, the Synod leadership team and the archbishop.
Angulo said even before it concludes, however, the Synod is yielding benefits for the archdiocese.Â
âItâs like leadership training for 500 people,â said the veteran catechist and director of religious education. âIt translates for us in our ministries.â
âAll the information is very useful for me,â agreed Josephine Gilbert, a leadership team member and president of the Miami Archdiocesan Council of Catholic Women. âIâm so happy with the opportunity.â