Philadelphia-based licensed clinical and family therapist Peter Kleponis holds up a smartphone - which he says young children should not have - after leading a workshop on internet pornography and addictions for some 70 parents and young adult men and teens gathered recently at St. Gregory the Great Parish in Plantation.

This is part of a package of stories to mark April as Child Abuse Prevention Month. They include a sidebar to this one, on pornography, and a group of stories on bullying.

PLANTATION | Parents who don’t supervise their children’s online activity and mobile device usage might as well be dropping their kids off at an “adult bookstore” filled with dangerous strangers.

That was the gist of a frank and wide-ranging conversation on Internet pornography and addiction that licensed clinical and family therapist Peter Kleponis led for some 70 parents, young adult men and teens gathered last month at St. Gregory the Great Parish.

Kleponis specializes in marriage and family therapy, pastoral counseling, resolving anger, men’s issues, and pornography addiction recovery through the nationally-recognized Integrity Restored program. He is certified in the diagnosis and treatment of sexual addictions by the American Association of Christian Counselors' Light University and by Dr. Mark Laaser's Freedom Begins Here program.

According to Kleponis, research shows that youngsters have their first encounter with encounter online pornography at 8 years old. Parents with young children and teens at home need to install parental filtering controls on youngsters’ cell phones and Internet.

“Even with that, if your child is on the Internet and using any technology a parent needs to be standing behind them watching everything they are doing,” Kleponis said.

Parents need to be aware that gaming systems with online connections and even public libraries and public access devices have also been widely used for viewing pornography without parental awareness.

Philadelphia-based licensed clinical and family therapist Peter Kleponis speaks to some of the 70 participants in his workshop on internet pornography and addictions which took place recently at St. Gregory the Great Parish in Plantation.

“For children 11 years and older we need to educate them about the dangers of pornography so they can reject it and say ‘No’ to it,” he said.

, which offer online access, are not necessary for young children. Instead he suggested a “flip phone” or the “Cricket” brand phone “which is only used to call mom and dad.”

“For teens, again we limit the screen time, and I suggest no more than two to three hours a day including school work online, and monitor all social media. And you never allow a teenager to isolate with the Internet,” Kleponis said. “The (Internet) access has to be done on the kitchen table where everybody can see that, and we need an online accountability service for computers, tablets and cell phones.”

He advises parents to remind youngsters that they are simply trying to protect them from sexual predators and profit-seeking pornography and that they have a right to supervise all communications devices and social media usage.

He also cited a growing amount of homemade or amateur-produced pornography, adding yet another layer of worry and complexity for parents and educators. 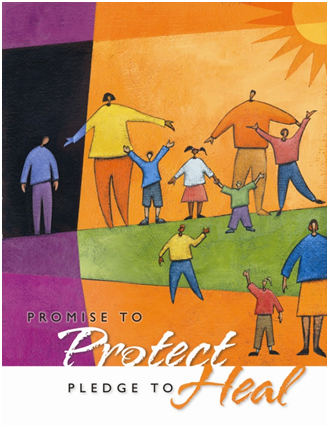 “In our work as priests, especially in the sacrament of penance, we meet good Catholic men whose consciences are rightly disturbed by their use of pornography, given its ready availability on the Internet,” said Msgr. Michael Souckar, pastor of St. Andrew in Coral Springs, who saw Kleponis’ presentation to local seminarians and was instrumental in organizing the March 7 event. “As ministers of Christ's mercy in the confessional, we priests want to be able to give good counsel to the penitent so that he can, aided by the grace of the sacrament, free himself from the misuse of his human sexuality with pornography.”

Father Miguel Gomez, vicar forane of the Northwest Broward Deanery region and pastor of San Isidro Parish in Pompano Beach, came to the presentation with a group of young adults from his parish. He also helped organize the event and hosted Kleponis.

“At many of the deanery meetings my brother priests talk about the challenge they face in people confessing this sin and so we decided to see if (the speaker) could come and help give us some enlightenment and ideas as to how we can help people face this problem,” Father Gomez said.

“The value of this is the instructional aspect of this presentation and the hope for those struggling with this problem because there is ,” Father Gomez said. “We don’t have to be enslaved to an addiction which is manageable and can be recovered from.”

Here are some relevant statistics on pornography given by expert and therapist Peter Kleponis:

ÔÇó Every 39 minutes, a new pornographic video is being produced in the United States, and increasingly these are amateur videos.

ÔÇó The pornography industry earns over $97 billion worldwide every year

ÔÇó There are 4.2 million pornographic websites

ÔÇó Christians who said pornography is a major problem in the home: 47 percent