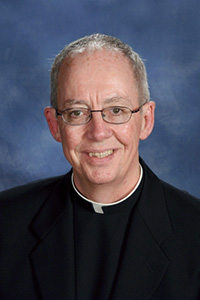 TAMARAC | Parishioners of St. Malachy are mourning the loss of their parochial vicar, Father Anthony O’Brien, who died unexpectedly May 13.

“It was quite unexpected for all of us as Father Tony had returned home to the parish only last week after his hospital stay and rehabilitation,” wrote Msgr. Chanel Jeanty, chancellor for canonical affairs, in an email to archdiocesan priests.

Father O’Brien would have celebrated 30 years of priesthood May 28. He was ordained for the Archdiocese of Miami in Carlow, Ireland, May 28, 1988, and began his work in South Florida July 1, 1988.

“We were contemporaries in the seminary. We always kept in touch,” said Father Curtis Kiddy, former pastor of Visitation and St. Jerome parishes in South Florida. Currently a novice with the Passionists in Scranton, Pennsylvania, Father Kiddy was ordained four years after Father O’Brien.

He described his friend this way: “Gifted preacher. Brilliant mind.” Father O’Brien could recall months later a remark someone had made, and he had “one of those dry senses of humor,” Father Kiddy said.

He recalled a summer trip he made with Father O’Brien, either in 1997 or 1998. After visiting Father O’Brien’s mother and sister in England, they went to Rome and from there to Ars, France, home of St. John Vianney, patron saint of parish priests.

“It was one of the most powerful moments in my life and I think Father Tony’s as well,” Father Kiddy said. “We were both parish priests and we were both confessors. It was very special.”

He said Father O’Brien identified strongly with his priesthood. “He always said a prayer after Communion when he was purifying his chalice. One of his prayers was that he would never cause any harm or scandal to the people of God. He saw his identity clearly in the priesthood of Jesus Christ.”

Father O’Brien served as a chaplain for the Hallandale police department. “He loved that work. There was something about police officers and him that just clicked,” Father Kiddy said.

Although he studied for the priesthood at St. Kieran’s Seminary in Ireland, Father O’Brien was born Jan. 30, 1955 in England, and grew up there. He spent time in 1976 as a volunteer with the Missionaries of Charity in Kolkata, India. He also worked as a shipping clerk in South Africa before entering the seminary in 1982.

He served as chaplain for English-speaking youth ministry in the summer of 1989 and resided at Annunciation in West Hollywood while pursuing higher studies at Barry University (1990-93). He also was in residence at St. Kevin from 1993 to 1995, while working on the staff of Catholic Community Services (now Catholic Charities).

In July 2006 he was named administrator, and later pastor, of St. Charles Borromeo Parish in Hallandale, where he remained until it merged with St. Matthew in Hallandale at the end of September 2009.

“It was very challenging for Father O’Brien when St. Charles was closed. He loved the opportunity of being a pastor,” Father Kiddy said.

After St. Charles, Father O’Brien served as parochial vicar at St. Maximilian Kolbe in Pembroke Pines (2009-2011). He had been at St. Malachy since January 2011.

Father O’Brien is survived by his mother, Anne O’Brien, and his sister, Rita O’Brien, both of whom reside in England.

“He was very devoted to the Blessed Mother,” Father Kiddy said. “We ask people to kindly, gently remember him in their prayers and rosaries.”

Marilyn Bach-Nunez - 05/22/2018 08:09 PM
I will always be forever grateful to Father O'Brien. Born and raised Irish Roman Catholic (NYC), he heard my first confession (2013) in more than 30 years as a returning Catholic. He really took the time to talk and prayer with me and I felt I had come home from a very long journey and back to my roots. He was amazing. It was such a happy day for me. Thank you for being such a blessing in my life. All my prayer's and condolences to the family. God Bless you Father O'Brien and may your soul rest in peace.

Norma Mendieta - 05/20/2018 05:47 PM
May his soul be at rest in the hands of our almighty God and Blessed mother. Father Anthony O'Brien will be dearly missed in our spanish speaking community.Our prayer's to his family and condolences, to father Dominic O'Dwyer,priests at St.Malachy.

Galen W. - 05/17/2018 11:32 PM
I am very saddened by the passing of Father O’Brien, he was a wonderful Chaplain at the police department and an even better friend. Father O’Brien brought me back closer to my faith and helped humanize the clergy to many people. My deepest thoughts and condolences go out to his family, friends, and coworkers. God bless and rest in peace.

Juan A. del Sol - 05/16/2018 06:35 PM
Prayers are offered for Fr. O’Brien’s eternal rest. Father is remembered at Church of the Little Flower in Coral Gables where he ministered for a number of years. Father, you are home at last. Please pray for us until we meet again with the Lord.