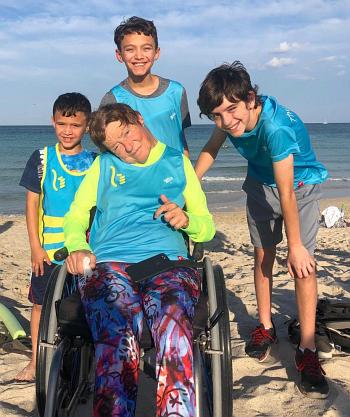 Youths take part in the April 14 South Beach Triathlon along with disabled athlete Kerry Gruson, center. The boys, from left, are Anthony and Lewis Perez, students at St. Mark School; and their friend Esteban Bird, a student at Mater Grove Academy in Miami.

The race took place April 14 at Lummus Park in Miami Beach. Lewis, 12, swam a half-mile while pulling the paralyzed Gruson through the waters of South Beach. Anthony, 7, pushed her along streets during a four-mile run.

Also taking part was their father, Lewis Ramon Perez, who pulled a cart with Gruson on his bike for 20 miles.

For the safety of the kids, adults swam and ran alongside.

Gruson is cofounder of ThumbsUp International, which uses runs, fitness programs and other events to build empathy and inclusiveness in the community.

A former journalist with the New York Times and the Miami Herald, Gruson was paralyzed in 1974 while interviewing a former Green Beret, who had a violent flashback and strangled her. The attack left her unable to move her legs, with almost no movement left in her hands.

Despite her injuries, Gruson has participated in several triathlons with help from other adults. But the April 14 event was the first she's done with children or teenagers. 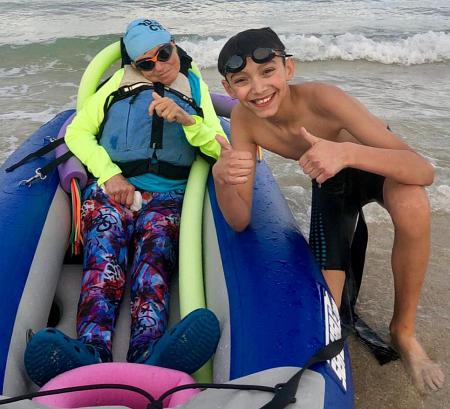 Lewis Perez, a sixth-grader at St. Mark School, gives a thumbs-up at the April 14 South Beach Triathlon. He teamed up for the event with disabled athlete Kerry Gruson, left, of ThumbsUp International.

The triathlon, covered by Local 10 on TV, coincided with the start of a Kindness Campaign at St. Mark's. The school's team was formed to support Gruson's organization, as well as to set an example for how to give back to the community.

But the team members found, to their surprise, that they received as well.

"I feel good because, like, it helps you, like you feel like you're helping her, but at the end she's also helping you during the race," triathlete 12-year-old Lewis Emilio Perez told Local 10.

Cynthia Perez, mother of the boys, agreed. "Helping Kerry accomplish her dream to race with kids has also helped us become better members of our community and inspired us to give our best.

"Most wonderful rewarding experience ever," she said.