Creator of pro-life billboards speaks at Mary for Life banquet at St. Malachy 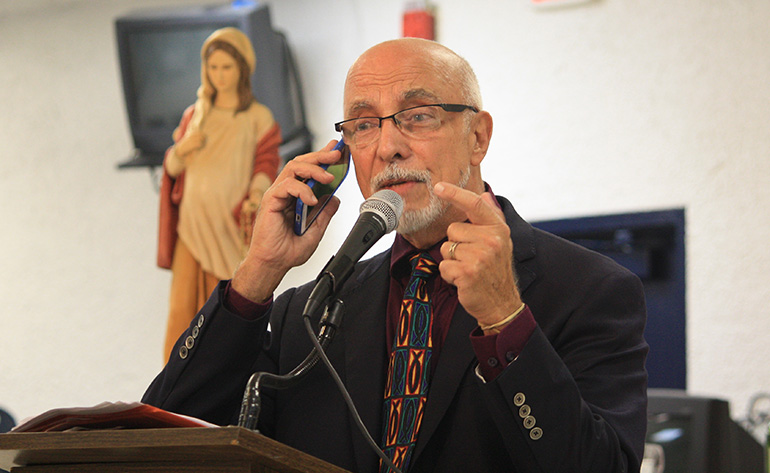 TAMARAC | Picture another 9-11 or 10 wide-body jets crashing every day—but no breaking news, no flags lowered, and no one being arrested. Ed Daccarett uses those analogies to convey the epic proportion of human lives lost to abortion in the United States—and how few people seem to care.

Daccarett is founder and publisher of Christian Action News, and president of LifeCan Inc., which places pro-life billboards throughout Florida. A Catholic and Palm City resident, he was the keynote speaker at the 24th annual Mary for Life banquet hosted by St. Malachy Church. He also received the John Paul II Award—for promoting the Gospel of Life—from St. Malachy’s pastor, Father Dominick O’Dwyer.

Traditionally held on Dec. 8, the feast day of the Immaculate Conception, the banquet this year also coincided with the beginning of the Church’s Jubilee Year of Mercy.

“Abortion is an epic battle beyond all others in human history,” Daccarett told the 115 people in attendance.

He framed his talk around statistical data on abortion, and contrasted that with the lack of pro-life witnesses within the Catholic and Christian communities.

Daccarett has done the math. 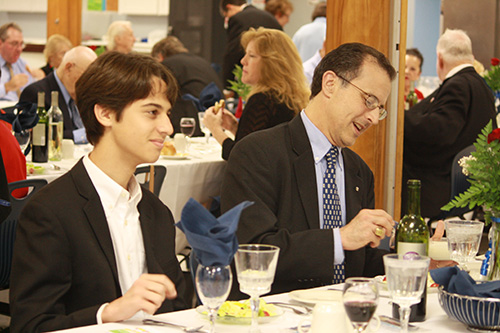 St. Malachy parishioners Juan Fernandez, left, and his father, Jose Fernandez, enjoy their meal at the banquet held by the parish's pro-life ministry held on the feast of the Immaculate Conception. 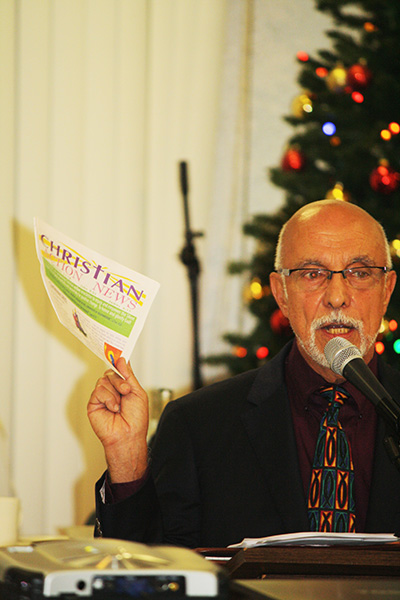 Christian Action News publisher Edward Daccarett encourages guests at the Mary for Life banquet to become informed about life issues by signing up for a free subscription to his publication.

“Pro-lifers love life, embrace life, defend and protect life, but why the silence among Catholics and Christians?” he asked, injecting more sobering statistics: 37 percent of all abortions are committed by Protestants, 28 percent by Catholics and 7 percent by members of other religions.

“Why do we protect seals, snails, dolphins, eagles, turtles, plants and even their eggs? What if they were killing puppies and kittens in our towns and cities at shopping centers, can you imagine the outrage?” Daccarett asked.

The sentiment was echoed by Eugene Cunningham, president of the St. Malachy Mary for Life ministry, who lamented what he sees as a diminishing group of pro-life activists.

“We are always preaching to the choir. In light of those horrific Planned Parenthood videos it is all the more depressing that there has not been a huge outcry,” Cunningham said, rhetorically asking, “What will it take?”

“I was amazed that only 30 people in the United States had written to the Kraft food company to protest their funding of Planned Parenthood. I was also reminded of how few priests speak at all about the sanctity of life in the womb, which was one of the most striking things of all,” said Emily Mangiaracina, a young teacher who attended the banquet.

This comes as no surprise to Daccarett, who said Christians seem to be “impotent” in the fight against abortion. He cited a culture that is “anti-God, anti-life, and anti-family,” and the time-consuming pull of television, Internet, newspapers and Hollywood.

He also listed the hierarchy of powerful forces that drive mankind: hunger, thirst, sexuality, love and hatred. Of non-vital urges, sex is the most powerful; in fact, it ranked number one among the top 15 Google Internet searches.

He cited Catholic philosopher and apologist Peter Kreeft, who hypothesized, “If sex had nothing to do with abortion, everyone would oppose it.”

Abortion has killed more human beings than all the world wars combined, Daccarett said, noting that unborn children are killed simply for being inconvenient.

He encouraged everyone to pray in repentance, reparation, intercession, conviction and conversion, specifically for the closure of abortion facilities and the reversal of Roe vs. Wade, the 1973 Supreme Court Ruling that legalized abortion in the U.S.

However, he emphasized that prayer is no substitute for action. “What if your house was on fire, would you get on your knees and pray, or would you call 911?”

“Beginning tonight and throughout this jubilee year, may we examine how much time we spend on this epic battle,” Daccarett said, encouraging everyone to sacrifice one additional hour a week and report for “active duty.”

“Millions are perishing, we cannot and must not remain silent,” he said, quoting Dietrich Bonheoeffer, the German Lutheran pastor, theologian, and anti-Nazi who said, “Silence in the face of evil is itself evil: God will not hold us guiltless. Not to speak is to speak. Not to act is to act.”

“I have always been so impressed with Ed’s passion and all he has done for life,” said Barbara Groeber, educational coordinator for the Archdiocese of Miami Respect Life Ministry. “One can only imagine the impact of his billboards” on the thousands of people who travel Florida’s highways. The billboards bear messages about the value of unborn life and abortion facts.

The most popular billboard states that a baby’s heart begins beating 18 days after conception. Daccarett’s Life Saver ads include 250 billboards and 400 advertisements on buses, bus benches, and metro and rail station platforms. The national hotline logs thousands of calls every year by zip code. 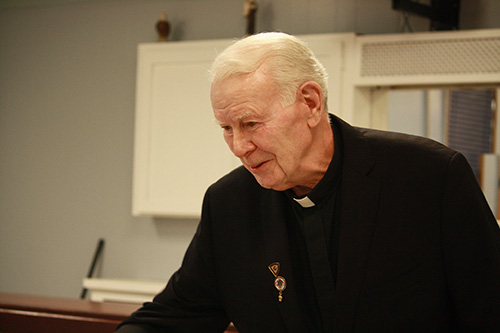 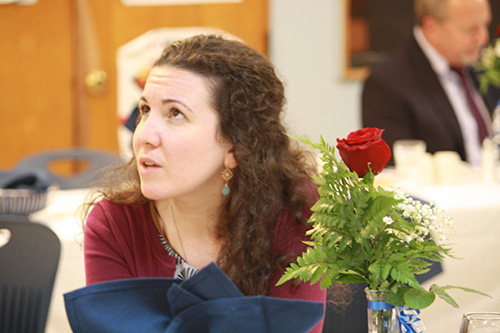 After attending her first prolife event, Emily Mangiaracina was inspired to make a committment to become informed and fight for the unborn.

Daccarett also capitalizes on his background as a broadcaster to promote the pro-life message. He is the founder and general manager of Prince of Peace Catholic Radio, WJPP 100.1 FM in Martin and St. Lucie counties, which also can be heard worldwide via the Internet.

“If for every one million impressions, just one life is saved, it is fair to say that 1,460 lives were saved this past year. That’s at least 48 classrooms of energetic kids, priests, bishops, nuns, brothers, missionaries, scientists and even saints,” Daccarett said.

“What impressed me about Ed’s talk was his comment that pro-life people are the only activists who have nothing to personally gain from their sacrifice and dedication to others,” said Joan Crown, archdiocesan director of Respect Life. “This seems to go along with Archbishop Thomas Wenski’s Advent reflection where he told us that our faith has what is called the Law of Gift—(people) cannot find true fulfillment unless they give themselves as gift in the service of others.”

“Ed Daccarett is a true selfless pro-life warrior who has given so much of himself over the years for the sake of the babies and their mothers with no desire of personal gain but to serve his Lord,” Crown said.

About Mary for Life

St. Malachy’s Mary for Life prolife ministry sponsors many events throughout the year to promote awareness about life issues. In addition to the annual banquet, group members pray in front of abortion facilities and participate in the annual Life Chain. Every year, on the Saturday closest to the Jan. 22 anniversary of the Supreme Court decision that legalized abortion, they hold a prayer service at Our Lady Queen of Heaven Cemetery in Fort Lauderdale for two aborted babies that were found in a dumpster. The group also sponsors an annual Walk for Life and has held pro-life rallies in front of a federal courthouse on the Jan. 22 anniversary of Roe v. Wade.