‘Every person has a gift from God worth sharing’

Francesca Marinaro reads the second reading in Braille at the second annual White Mass in Broward County. Lying behind her is her guide dog, Zeus. The Mass took place at St. Malachy Church in Tamarac, Nov. 21. Marinaro has been educated in South Florida Catholic schools from first grade through 12th. She graduated from St. David School in Davie in 1998 and St. Thomas Aquinas High School in Fort Lauderdale in 2002. "It was a really positive experience just in terms of being able to have an opportunity to participate actively in the Mass," said Marinaro after the White Mass.

"By accepting your life as you have it and meeting all of the demands of life in your own special way, you are indeed giving to us an inspiration Which makes us or challenges us to try harder ourselves to do more with our own lives," said Father Dominick O'Dwyer, pastor at St. Malachy Church in Tamarac, during the White Mass Nov. 21. "You inspire us to do greater and better things."

Andrew Kitbamrung, 16, parishioner at St. Malachy Church in Tamarac, brings a white rose as an offering during the second annual White Mass in Broward County. The white roses were placed in front of the altar as a symbol of the special Mass.

Kathleen Searless, a parishioner at St. Malachy Church in Tamarac, prays during the second annual White Mass in Broward County.

Kathleen Searless, back to camera, hugs Mercedes Frassetti during Communion at the second annual White Mass in Broward County. Searles, who has been a parishioner at St. Malachy Church since 1972, has a weekly tradition of hugging all who pass by her after receiving Communion.

Kathleen Searless, parishioner at St. Malachy Church in Tamarac, processes out of church holding the hand of her pastor, Father Dominick O'Dwyer, after the second annual White Mass in Broward County.

Rachelle and Herve Arsenault, parishioners at Blessed Sacrament Church in Fort Lauderdale, attended the White Mass in Broward County. Rachelle, who is legally blind and a client of the Lighthouse of Broward, attended the Mass for the second year.

Kristian Chima proclaims the second reading of the White Mass at St. Patrick.

James Ramsey leads prayers "for those in special needs ministry who have gone before us," including the Shrivers, during the White Mass in St. Patrick Church.

Handbell choir from the Marian Center School and Services performs "Ave Maria" at the White Mass in St. Patrick Church.

Archbishop Wenski give Communion to an attendee at the third annual White Mass in Miami-Dade County.

Marlana VanHoose sings and plays another version of "Ave Maria" at the White Mass in St. Patrick Church.

Anthony Kennedy Shriver of Best Buddies, who started the White Mass tradition in the Archdiocese of Miami, poses with Marlana VanHoose after the celebration at St. Patrick, Miami Beach, Nov. 21.

Three of the handicapped participants buddy up after the White Mass in St. Patrick Church. From left are Samiha Dossul, James Ramsey and Demetrius Dozier. All have gone through the "International Ambassadors" program in public speaking.

Demetrius Dozier shows off his Best Buddies T-shirt after the White Mass in St. Patrick Church.

MIAMI BEACH | Anthony Kennedy Shriver smiled big after the White Mass, not only for photos but for the satisfaction.

"When I see someone with special needs come to Mass, I've succeeded," Shriver said after the annual Mass for people with disabilities, which he started in 2013. "Every person has a gift from God worth sharing."

The third annual event, named for the white uniforms of medical workers and others in healing professions, brought 200 people to St. Patrick's Church Nov. 21.  Archbishop Thomas Wenski served as the main celebrant for a Mass that included laity, Sisters of St. Joseph Benedict Cottolengo, black-robed Knights of Malta, and clients of Shriver's organization Best Buddies. 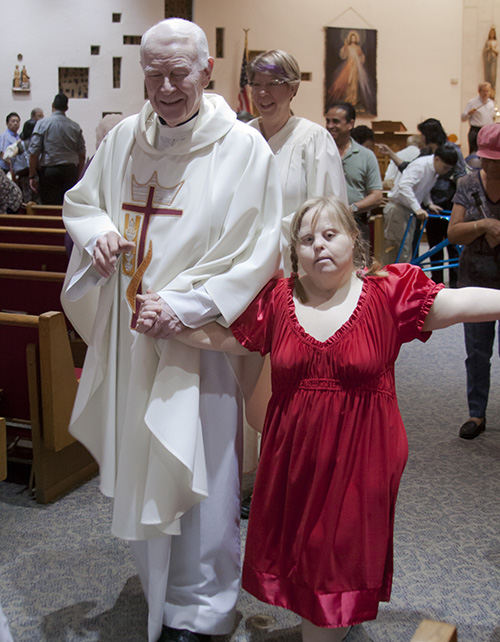 Kathleen Searless, parishioner at St. Malachy Church in Tamarac, processes out of church holding the hand of her pastor, Father Dominick O'Dwyer, after the second annual White Mass in Broward County.

"It's a celebration of special-needs children and adults," said Michael Goodman of the Knights of Malta. "It's a recognition of their contributions, on how they're a blessing to us and to each other."

In keeping with the theme of contributions of the disabled, most of the prayers and readings were done by graduates of Best Buddies' "Global Ambassadors" program for public speaking.

"I like speaking to a lot of people," said Demetrius Dozier, who gave the welcome and briefed the congregation on the reason for the White Mass. "I love everybody."

The disabled not only spoke out, they played and sang out. A half-dozen from the Marian Center School and Services performed "Ave Maria" on handbells. Offering another version of "Ave Maria," by voice and piano, was Marlana VanHoose of Johnson County, Ky.

VanHoose has performed around the country at churches, conferences and sporting events, including the 2014 NBA championship. She also performed at the White Mass last year.

"I felt inspired," she said after the Mass. "God has blessed me to sing."

In his homily, Archbishop Wenski held up the Miami-based Best Buddies as a model of the society that Jesus called for: a "culture of encounter" that cares for the weak and vulnerable, rather than rule and dominate them.

"In a culture of encounter that nourishes friendship among persons of equal dignity and worth there is no one so poor that he or she does not have something to offer, to give to the other," he said. "And, at the same time, there is no one so rich that he cannot receive from the other. 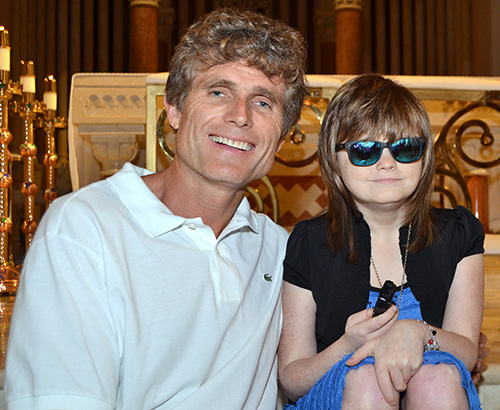 Anthony Kennedy Shriver of Best Buddies, who started the White Mass tradition in the Archdiocese of Miami, poses with Marlana VanHoose after the celebration at St. Patrick, Miami Beach, Nov. 21.

"Those who some might consider poor or unimportant because of developmental disabilities are capable of giving much, and those considered rich in material or intellectual gifts can and do receive so much from them," the archbishop said.

The idea for the White Mass goes back to the 1930s, when the Catholic Medical Association began to link their profession with Christ's life. It's an annual Mass in Atlanta, St. Louis and elsewhere. Shriver was inspired to start the tradition in the Miami archdiocese after his mother began one in Washington, D.C.

The White Mass is also associated with St. Luke, called "the beloved physician" in the Bible, and some dioceses hold the event on his feast day, Oct. 18. In South Florida, however, it's commonly held on the Sunday before Thanksgiving.

The Miami Beach Mass served as a catalyst for a new series in Broward County, which held its own White Mass on Nov. 21. Another 200 people showed up at the second annual event at St. Malachy Church in Tamarac.

That Mass, co-hosted by Lighthouse of Broward, began with a procession of special-needs people, along with friends, families and caretakers, who laid white roses at the foot of the altar. As in Miami Beach, many disabled also took part, including two blind people who did the readings using Braille.

Father Dominick O'Dwyer, pastor of St. Malachy and the main celebrant of the Broward Mass, preached on how people living with disabilities are inspirational to others. He encouraged them to be strong and to continue living life fully.

Dolores McDiarmid, public awareness specialist at Lighthouse, said it was good for people with various disabilities to attend one event. "People tend to stay in their own bubbles," she said. "Getting them all together gives them a chance to form new friendships."

A reception afterward featured light sandwiches and beverages, sponsored by parishioners and the Knights of Columbus. Dessert was two sheet cakes baked by Joel Tepperberg, a client of Lighthouse, who also baked for last year's White Mass. "Sinfully delicious" was McDiarmid's tongue-in-cheek verdict.

More seriously, she added: "I am reminded that Jesus calls us to serve, and we all did that. We served the least, those who are sometimes ignored or forgotten, as well as those who are living well and meaningful lives with their disability. And it was done with warmth and joy."