'We find them worthy' 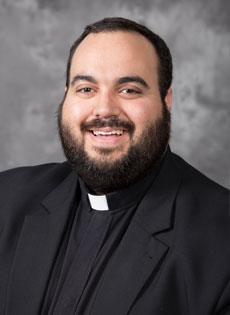 In his message for the World Day of Prayer for Vocations — which we celebrated on Good Shepherd Sunday, the fourth Sunday of Easter (April 25) — Pope Francis invited us to pray with St. Joseph. St. Joseph was a good shepherd, even though he was a carpenter. In the midst of his work, his vocation as husband and father, he still laid down his life for the sheep under his care. The only way St. Joseph could have done this was with deep communion with his heavenly Father. He knew the Shepherd’s voice.

Pope Francis states that St. Joseph “through his ordinary life ... accomplished something extraordinary in the eyes of God.” We are sometimes tempted to think that our lives are so ordinary that God cannot be calling me. We are tempted to think that these big-time saints are the only ones who had the opportunity to be called. In each of us exists a desire, an aspiration to do something extraordinary! It is in this deep desire of the heart that Pope Francis says that St. Joseph’s “heart was directed to God ... his watchful ‘inner ear’ recognizes God’s voice.” In recognizing God’s voice, we will be able to respond to his call.

This reminds me of the story of God calling Samuel. While Samuel and Eli were sleeping, God calls Samuel three times and he wakes up thinking that it is Eli asking for assistance. Eli finally realizes that it is God calling and he instructs the young Samuel to say, “Speak, for your servant is listening” (1 Samuel 3:10). We all have a role to play in vocations ministry. Whether we are Samuel trying to hear God’s voice or Eli teaching the young people how to hear God’s voice, we are all important.

This upcoming Saturday I will have a very important and public conversation with Archbishop Wenski. In front of the whole Church of the Archdiocese of Miami, I will say: “Most Reverend Father, holy mother Church asks you to ordain these, our brothers, to the responsibility of the priesthood.”

The archbishop will ask a very important question: “Do you know them to be worthy?”

I, with great joy and great confidence, will reply: “After inquiry among the Christian people and upon the recommendation of those responsible, I testify that they have been found worthy.”

The archbishop will then elect the men for the priesthood by saying: “Relying on the help of the Lord God and our Savior Jesus Christ, we choose these men, our brothers, for the Order of the Priesthood.”

We will all then give our assent by saying “thanks be to God” accompanied by thunderous applause.

The reality is that we will never be worthy of the call we have received. However, God in his mercy, compassion, and kindness calls us. It is in the freedom to receive the call, the struggle to discern the call, and the fact that God is the one doing the calling, that we are found worthy.

For the past few years, the eight men who will be ordained this Saturday, May 8, have been discerning how the Lord is calling them to serve him. They have had their fair share of Eli and Samuel moments. They have honed their “inner ear” to hear the voice of God, like Joseph. Soon they will be shepherds modeled after the heart of Jesus, the Good Shepherd. We, the Church, have found them worthy to be those ministers who will lay down their lives for their sheep. Let us pray for them!