Channels 7 and 23 to broadcast Easter Sunday Mass with archbishop 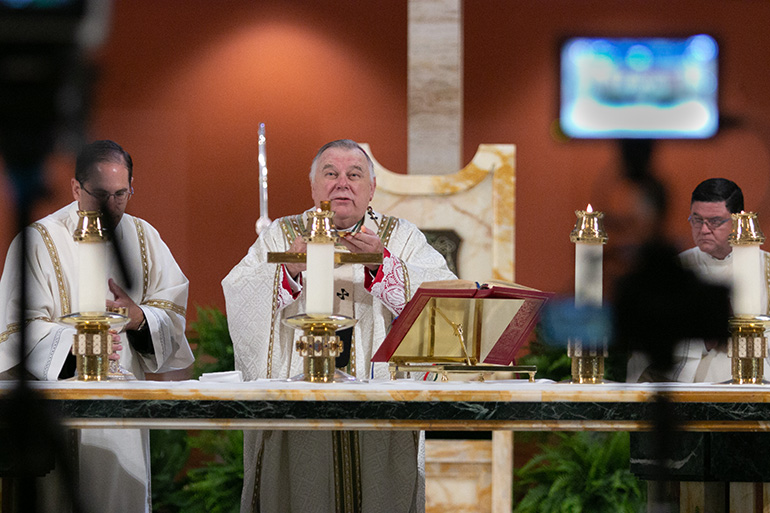 In an empty St. Mary Cathedral, Archbishop Thomas Wenski pre-records an Easter Sunday Mass to be aired by WSVN-7 at 11 a.m. April 12.

MIAMI | Thanks to the generosity of two local television stations, Catholics will be able to join Archbishop Thomas Wenski for the celebration of Easter Sunday Mass this April 12.

WSVN-7 has donated an hour of airtime, beginning at 11 a.m. Sunday, to broadcast an Easter Sunday Mass pre-recorded by Archbishop Wenski at St. Mary Cathedral.

WLTV-23 also will broadcast the Easter Mass in Spanish at the usual time, Sunday at 6:30 a.m., and again at 11:30 a.m. That Mass also was pre-recorded by the archbishop at La Milagrosa Mission of Corpus Christi Church in Miami.

“We are extremely grateful to these stations for making it possible for Catholics to join the archbishop in the celebration of Easter Sunday Masses directly through their televisions,” said Mary Ross Agosta, archdiocesan director of communications.

“As the archbishop has stated, although we are physically separated we remain one body of believers, united in spirit during this pandemic,” Ross Agosta added. “And the media are certainly doing their part to help us come together.”

Jacqueline Cobb - 04/12/2020 11:14 AM
Thank you for making your masses, including Easter mass available to everyone. It is greatly appreciated by us, the faithful, particularly while we are social distancing. May God bless us all.

Sammy Diaz - 04/10/2020 11:43 AM
Thanks to the Communication Department and Mary Ross Agosta fo given us the opportunity to have Easter Celebration with Archbishop Wenski. The communion of the Church is in the Holy Spirit, even if we are unable to be close to others,physically .

Andrew Meszaros - 04/10/2020 09:57 AM
Why are all the Masses still celebrated "facing the people"? Even now, when there are no people present. A priest alone in a church facing empty pews with his back to the tabernacle. Does that make any sense to anybody? Most of the Masses are done privately now, not televised, not streamed on the internet. Fathers, think about what you are doing. You are supposed to worship the Divine Majesty. The time of chummy gathering is over. Turn towards the Lord at least now.