Nature: 'Is it not worth saving?'

Several colors, from dark to light, mingle in 'Mangrove Sunset' by Susan Feldman.

The reddish egret, taking flight in this picture by Ana Sora Vadillo, is the rarest heron species in North America.

An egret in Bonnie Madeu's picture 'Sunset Over the Mangroves' shows how a palette knife can render even small shapes.

'Mangroves II' by Annie Gonzalez shows how much of the plant may live underwater.

Roseate spoonbills, like this one in Eumelia Castro's picture, are sometimes confused with flamingos.

MIAMI GARDENS | An unusual group of artists has created vivid paintings of birds, corals and mangroves – using small knives instead of brushes – and is showing their work at St. Thomas University.

Calling themselves the Palette Knife Artists of Miami, the group opened its “Fight for Survival” exhibition Sept. 9 in STU's library. The free show will be at the university through Dec. 17, 2021.

Each of the 52 pictures was done by carefully daubing oil paints onto the canvas with tools usually used to combine colors. For the 11 Palette Knife Artists, the goal is to highlight the beauty of Florida’s threatened environment, and to highlight the need to preserve it. 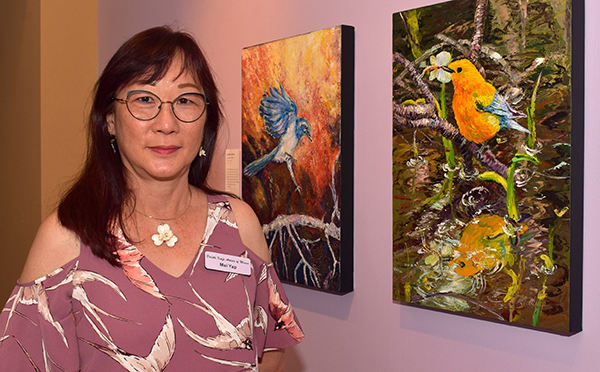 MaiYap, founder of the Palette Knife Artists of Miami, shows Lorraine Tucker's painting of a Florida scrub jay, left, and her picture of a prothonotary warbler.

“Every stroke of an artist can bring a higher emotion,” said MaiYap, founder of the Palette Knife Artists. “Look at how beautiful nature is. Is it not worth saving?”

It's the largest exhibition STU has ever sponsored, with the pictures filling the two galleries in the main library, then overflowing onto three of its four second-story atrium walls.

Museum coordinator Isabel Medina was dubious about holding such a large art show until MaiYap showed her the collection. Medina was sold on not only the pictures but their message.

“The paintings are so powerful, glowing with richness,” Medina said, almost struggling for the right words.

She noted that the conservation ethic overlaps that of Pope Francis, who issued his creation care encyclical Laudato Sí in 2015. It’s the same message environmentalists have been saying for 40 years, she added.

“We’re all working on the same thing," Medina said. "God created the Earth and its creatures and us. We need to pass the message along.”

The extra space was apparently worth it: The opening reception drew 78 people, including STU staff and faculty, plus biology students

The opening was part memorial service for one of the members, Leona Rogers, who died June 30. Her three grown children presented STU with two of her paintings in her honor. 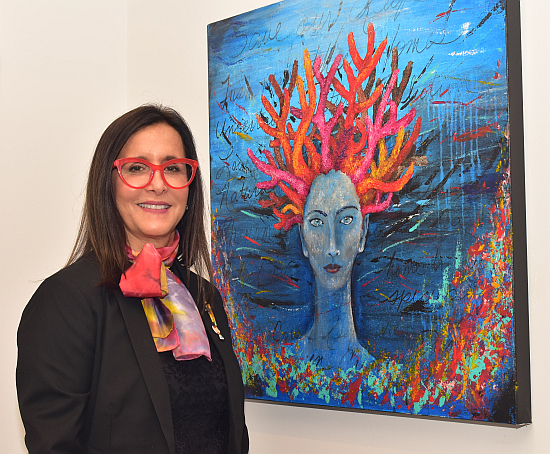 On display were a wide array of treatments: from distinct leaves and bark to wing pinions to dreamy, impressionistic landscapes and seascapes. Susan Feldman, in fact, titled one of her works Swimming with Monet, after someone said her art resembled that of the 19th century Impressionist artist.

“I fell in love with the palette knife technique,” said Feldman, who added with a smile: “And if you make a mistake, you can cover it up.”

“She's the protector of the seas and corals,” Vadillo said. “I like strong colors, to capture power and emotion.”

Other artists in the group render fine details and subtle colors. Alexandra Urvina invited a closer look at her painting Acropora, the Territorial Damsels Playground.

The double-wide picture shows a school of damselfish swimming amid fingers of pink coral. But the realism comes from tiny dabs of paint applied with palette knife – blending pink, purple, orange and nearly 30 other colors.

It all took a month, working up to five hours a day, but Urvina called it a labor of love. “I've loved details since I was very young. I love making pictures look almost like photos.”

MaiYap sees palette knife painting as more abstract, emotive, even intuitive. “I painted with a brush for 15 years, and it was always there. It’s a different experience with a palette knife. It became an extension of my hand. A direct connection between heart and hand and mind.”

This nature-minded group began, appropriately, in a garden: Miami’s Fairchild Tropical Gardens. There, MaiYap taught an art class, gradually gathering others who loved nature as well as art. At first, they all painted their own themes. Then MaiYap’s biologist daughter, Alessandra Jimenez, told them how fast trees and coral reefs were dying off.

“I asked myself, if I'm an artist who loves nature, why didn't I know about this?” MaiYap said. Her fellow artists agreed and steered their work toward more environmental themes. 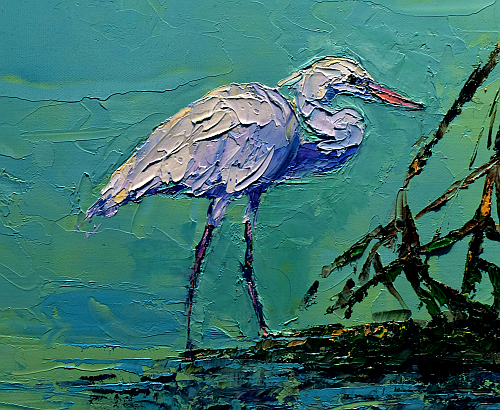 An egret in Bonnie Madeu's picture 'Sunset Over the Mangroves' shows how a palette knife can render even small shapes.

They researched mangroves with guidance from Gary Bremen, a ranger at Biscayne National Park, and held the show in 2015 at the park gallery. Over the years, they added the shows for coral and birds.

Each show takes about 18 months, from idea to brainstorming to research to painting to exhibition. The artists occasionally visit places like Everglades National Park, but work largely from internet images. Member Bonnie Madeu, a photographer, also provided pictures of birds from around Florida.

For facts on the environment, they rely on groups like the Audubon Society and the Coral Restoration Foundation. Some of the facts appear in the exhibition catalog, including:

The exhibition won the praise of STU president David Armstrong, who spoke at the opening.

So the Palette Knife Artists have a mission. But how do they know if they succeed?

MaiYap's answer: “We don’t. My goals are to bring awareness to as many people as I can, and to inform them how they can help. The more we show, the more people we reach. It's a never-ending goal.” 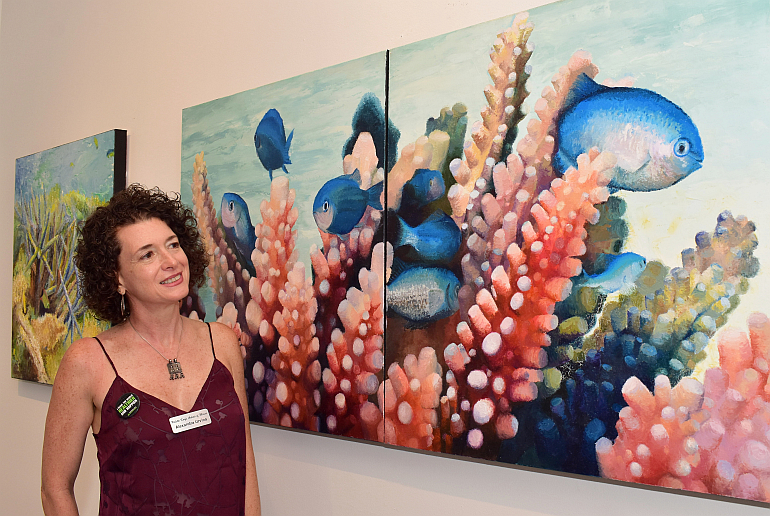 Alexandra Urvina took a month to render the soft pastels and fine details of her painting of fish and coral.