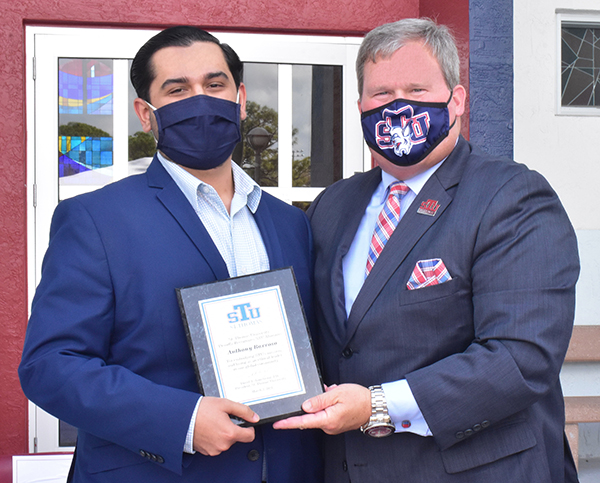 Anthony Barroso, left, gets a plaque from President David Armstrong of St. Thomas University for his action against an anti-Semitic graffito. The presentation took place March 2, 2021.

MIAMI GARDENS | Like many on their way to work, Anthony Barroso saw the graffito: "Beware of the Jews."

Unlike others, he did more: He came back and painted over it.

That difference got media attention and a plaque of appreciation for Barroso at his alma mater, St. Thomas University.

"When we see our students and alumni exemplify this, we want to celebrate it," said university president David Armstrong, who presented Barroso also with a new Bobcats polo shirt and cap.

"Anthony Barroso stood up and took action," Armstrong said at the March 2, 2021 media conference in front of St. Anthony Chapel. "It makes our world better." 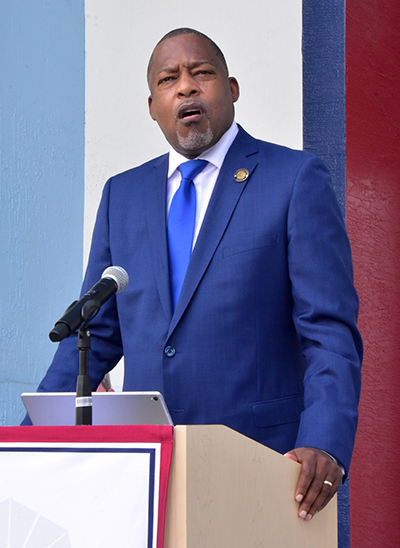 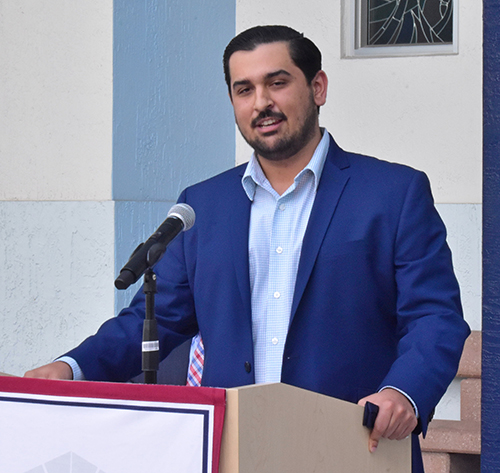 Anthony Barroso speaks at a media conference March 2, 2021 about his action against an anti-Semitic graffito.

A variety of religious and civic leaders also spoke at the gathering, which drew journalists from TV news and local newspapers.

"We should all feel comfortable to believe as we should," said Mayor Rodney Harris of Miami Gardens, who attended along with the Rev. Robert Stephens III, a city council member.

Harris then addressed Barroso: "Thank you for doing something about this hatred."

The honoree himself, who graduated from STU in December, seemed pleased but puzzled at the attention.

"What I did should be ordinary," Barroso said in his response. "We have a beautiful country. We need to empower each other."

The speakers agreed. "The person who committed this [anti-Semitic graffito] is not typical of Miami," said Shannon Walters of the campus Jewish Law Association, speaking on behalf of the Anti-Defamation League. "Anthony Barroso is."

Imam Abdul Hamid Samra of the Islamic Center of Greater Miami promised to "work together to create a more inclusive and safe neighborhood. Anthony did the kind of act that God would be pleased with."

Father Rafael Capó, vice president of mission for STU, noted that on the same day, the Vatican was announcing plans for a visit by Pope Francis to Iraq, where Abraham — from whom Judaism, Christianity and Islam sprang — was born.

Barroso, 27, earned a master's degree in sports administration at STU. He went to work for a firm in Doral that helps high school athletes advance to college teams.

"Why shouldn't I take action?" he said in an interview after the media conference. "This should be something that resonates with all of us. We should be an example of what we want to see."

On Feb. 23, 2021, he was en route to work from his home in southwest Miami-Dade when he saw the anti-Semitic slur, daubed in white paint on a fence. The graffito offended him personally because of his Jewish friends, including his girlfriend and her family.

"I couldn't stand for it to be there," Barroso said. "It bothered me that Jewish people would see it throughout the day. In the past year, there's been an atmosphere of such divisiveness. We need to be a counterbalance."

So he came back on his lunch break with a quart can of white paint and painted over the words. The act brought some initial news coverage, and STU officials caught sight of Barroso's Bobcats cap. That's when they got the idea of a media conference to honor what he did.

During his introduction, Armstrong cited a 1790 letter from George Washington to a rabbi in Rhode Island, pledging "not only tolerance, but full liberty of conscience to all, regardless of background and religious beliefs."

Armstrong added: "Today, we can recognize one of our own who did something about it." 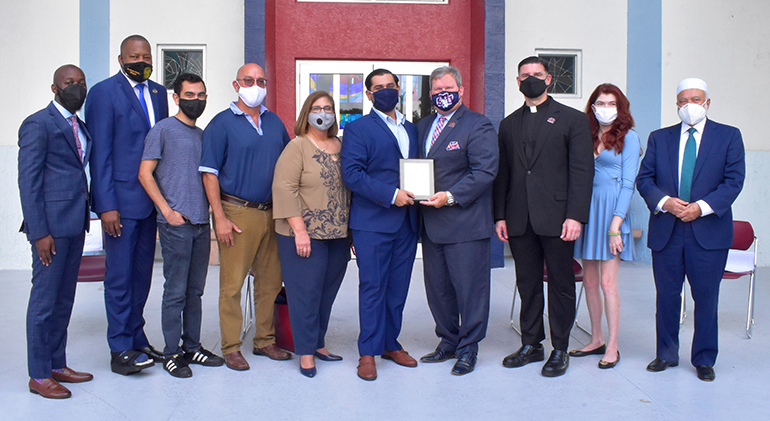 Family, friends and officials line up for a photo with Anthony Barroso after the St. Thomas University alumnus was honored March 2, 2021 for his action against an anti-Semitic graffito.