'To say I love school is an understatement' 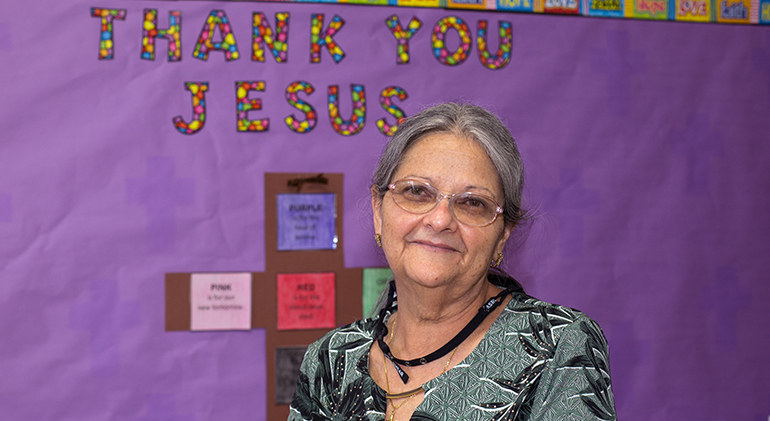 Nativity School kindergarten teacher Margaret Knowles is retiring this month, having never missed a day of teaching in 27 years.

HOLLYWOOD | A teacher who is saying goodbye after nearly three decades of Catholic teaching is ending on a record-breaking note, keeping her family’s streak of consistency going.

“I am retiring after teaching for the last 27 years,” said Margaret Knowles, a kindergarten teacher at Nativity School in Hollywood. “I have a perfect attendance record. To say I love school is an understatement,” added Knowles, who hasn’t missed a day of work during her entire teaching career.

Knowles’ sons Patrick, William and James began the family’s good-attendance-streak when they were at Nativity years ago. The three brothers were the first students to graduate from the school without missing a day. All three Knowles boys went on to graduate from Chaminade-Madonna College Preparatory in Hollywood. Patrick, now 33, and William, 31, graduated without being absent or tardy their entire academic careers. James, 30, only missed one day.

William told the Florida Catholic, "It was harder being out of school because once you miss, you've got to catch up on your work. I never liked being behind."

The boys’ punctuality record had been unmatched until this year. Their mom’s record indicates that she has shown up on time for every single school day, class, meeting, activity and workshop over the years. 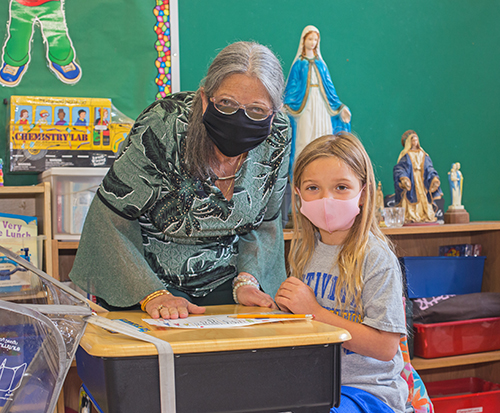 “It is unusual,” said Elena Ortiz, principal of Nativity, about Knowles' perfect attendance. “I have never had that.”

One in four teachers miss 10 or more school days in a year, according to a U.S. Department of Education analysis. Every day off can set teachers and their students behind. A Gallup finding also revealed that teachers who are happy with their jobs don’t miss work. Easy to see, then, that Knowles loves her vocation and being at Nativity.

A native of Florida and parishioner at Nativity, she was born into a Catholic family. Her mother, who died in 2006, was a cradle Catholic. Her father, a U.S. Navy veteran who died in 2013, was a convert to Catholicism.

Knowles herself is a product of Catholic schools, graduating from Our Lady of Perpetual Help in Opa-Locka (now closed), Msgr. Edward Pace Highand St. Thomas University (then Biscayne College) in Miami Gardens.

Knowles met her husband, Richard, also a Floridian, 42 years ago at a construction company where they both worked. She worked in accounting. He was a job superintendent. They enjoyed each other’s company and began dating. Two years later, they married and began building a life as a couple. Then the children came one after the other.

“We had three boys in four years,” said Knowles. “I always wanted to be a mom.”

When the kids went off to school, Knowles followed them. “When my kids started to school, I started helping out. That got my foot in the door.” She explained that she never felt like she needed to be anywhere else. “I became an aide, and I kept going.”

One thing led to another, and Knowles’ love for the classroom and teaching blossomed. She earned teaching certificates and began teaching pre-school and then kindergarten at Nativity.

The years passed. The students came and left, moving forward. Now, the longtime teacher reflects on her 4,860 days in the classroom and the 700 children she taught, helping form their foundations of learning as they began their school years.

“I enjoy teaching so many first and new ideas to the young ones,” she said. “I am the first one that teaches them religion. It is an honor. My little scientists love my bugs and bees and lizards that I have. I have more costumes than you can imagine. I have dressed as a bee, a butterfly, Cinderella. Once I surprised the students with a frog on my head.” 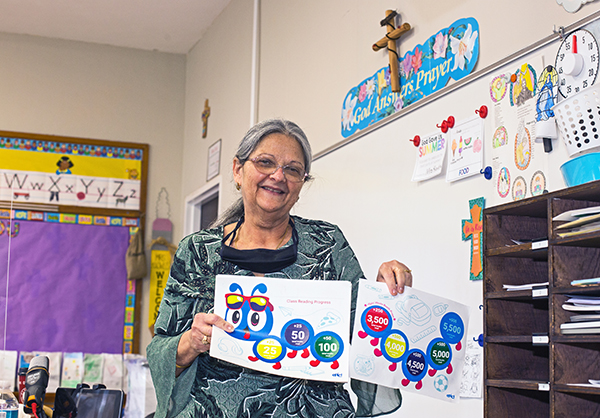 Nativity School kindergarten teacher Margaret Knowles is retiring this month, having never missed a day of teaching in 27 years.

“I have been in places where young adults come up to me. I don’t recognize them. I taught them when they were so young,” she said, recalling one recent incident when a young man spotted her in public. “He asked me if I was a teacher at Nativity, and he told me that he was in college. He said, ‘I want you to know that you were my favorite teacher of all times.’ That made me feel so good.”

Two years ago, a former preschool student contacted her. He was graduating from high school and being honored for achievements on the sports field during a special football game. “He wanted me to attend and walk him onto the field,” said Knowles. “His mother told me that I have always been a part of his life, and that he kept a memory book I made for him. Needless to say, I attended the game with joy in my heart.”

Ortiz used the word “dedicated” when describing Knowles. Joyful, passionate about her work and committed are some of the other words used to define this educator.

Knowles said leaving her job and school family was a difficult decision. In 2011, doctors diagnosed her with oral cancer, a disease that requires urgent and continuous attention. “I am monitored,” she explained. “It has come back three times.”

She has undergone multiple surgeries, always scheduling them during summer breaks and holidays so as not to miss school. The doctors have removed one third of her tongue and performed an array of reconstruction procedures. She continues to remain hopeful and positive.

“Thank God for new technology,” she said. “I have no feeling on one side of my mouth. It is uncomfortable, but I can speak. I am very lucky.”

The Nativity community has been there for Knowles throughout her battle for the past 10 years. “My school has been supportive of me the whole way,” she said. “They have sent prayers and well wishes. I am on so many prayer lists that I am sure God is listening to them all.”

Knowles’ last day with her students was June 9, and her last day at school was June 11. “We are having a (socially distant) luncheon for her and three other teachers who are leaving,” said Ortiz, who also planned a few other surprises for the educators.

“Nativity is my home away from home, and I definitely think of some of the people as my extended family,” said Knowles. “We will be friends forever in spite of me leaving the school.”

How will Knowles spend her retirement? “The first thing I want to do is relax,” she said, but then began talking about the many items on her to-do-list, including going back to the school for a visit at some point. “I might physically be leaving the building, but my heart and soul will always be there,” she said. 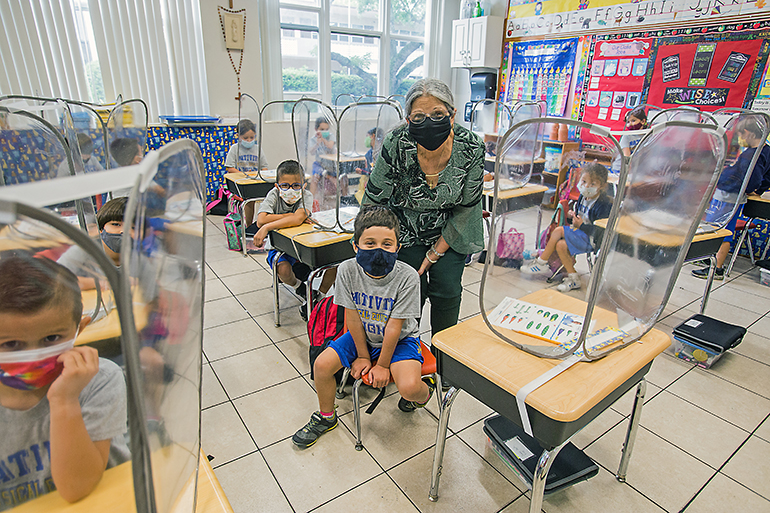 Nativity School kindergarten teacher Margaret Knowles poses with student, James Sayfie, 6, and his classmates before her last day of school. She is retiring this month, having never missed a day of teaching in 27 years.