See a problem? Start a business

MIAMI | Many schools talk about preparing their students for the real world. Immaculata-La Salle High School proves it by encouraging students to see problems and find solutions.

Sometimes, finding those solutions has spurred the creativity of Immaculata-La Salle students and served as a business incubator. 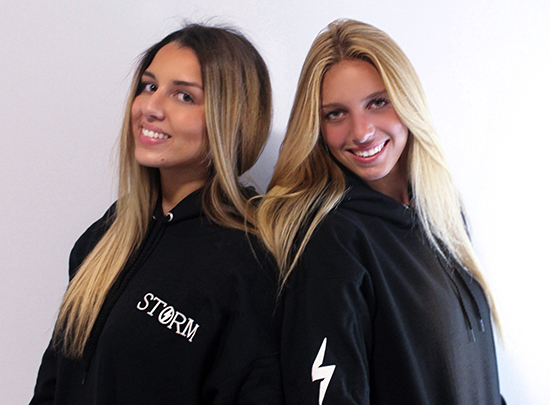 Andrea Dutkowski, left, and Alexia Menendez, both 17 and senior at Immaculata-La Salle High School in Miami, founded StormMiami, an apparel company, as juniors. They donate their profits to hurricane relief efforts in the Bahamas.

That’s the case with seniors Andrea Dutkowski and Alexia Menendez, both 17, who founded StormMiami, an apparel company, as juniors.

Sofia Farres runs See the Good, a company that features apparel and other items but also uses social-media platforms to encourage positivity and encourage community service. The company uses some of its profits to benefit causes as well.

Mariana Bujalil, also a senior, designs for Farres but also has a sticker line whose proceeds will assist immigration lawyers’ pro-bono work.

“Ever since I got to La Salle, they have a lot of great classes you can take creativity-wise,” Farres said. “They really push their students to believe in themselves. That was one of the driving forces for me to do that.”

Dutkowski said that she and Menendez had always wanted to start a business together. But Immaculata-La Salle’s response to Hurricane Dorian got them thinking. They saw several students donating and making speeches to support the Bahamas recovery efforts. But for them, it was personal. It hurt them to see what the Category 5 storm had done to a favorite vacation spot.

“Treasure Cay got hit bad,” Menendez said. “That was more of our motivation. We want to fix Treasure Cay.”

That led Dutkowski and Menendez to start StormMiami, which donates 20% of its profits to Bahamas relief efforts. They figured they’d sell something they see every day in the hallways.

Dutkowski has taken business classes at Immaculata-La Salle but has also drawn on family experiences. Her mom, Andreina Trejo, is a banker. Dutkowski turned to her and to mentor Megan Fitzpatrick to build a business plan. Fitzpatrick would meet with her periodically to assess how the business was going. Trejo provided the seed funding for the business.

“I explained to them that’s what a bank does,” Trejo said. “I give you money, with an interest rate, and you have to pay. The first time I lent them money, they paid it to me in two days. I asked Andrea why she paid it back so fast, she said, ‘I feel like I can breathe. Now I understand what it is to have debt.’ I didn’t charge interest. I helped them.”

Menendez said that Immaculata-La Salle has not only given her inspiration. She said that her fashion design classes gave her insight into what designs draw the eyes of potential clients. She also built her designs during her computer-design classes. “The environment benefits us in so many ways,” Menendez said. “Many people support us.”

Through the end of May, StormMiami had raised $3,000 for Bahamas relief. Those funds remain in a savings account while the company seeks the right charity.

Farres also found purpose in helping the community. She recalled her grandmother always talking about seeing the good in people, so she wanted to do something that mattered. Her desire met opportunity at a film camp at the University of California at Berkeley. There she saw creative types who were unafraid to follow dreams. 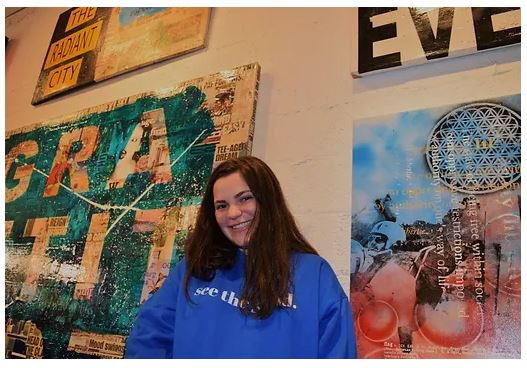 Sofia Farres, a senior at Immaculata-La Salle High School in Miami, runs See the Good, a company that features apparel and other items but also uses social-media platforms to encourage positivity and community service.

Upon her return, Farres started building a YouTube channel to encourage people to share positive messages that would help others through struggles. She also saw a sweater with See the Good on it but didn’t think that there would be a demand for it. She was wrong — demand was strong.

“It took off from there,” said Farres, a senior this year. “It’s become way bigger than I ever thought it would be.”

She said that her father, a lawyer, challenged her to set goals. He also asked her a lot of questions. She prayed over those questions and asked some more. Her folks directed her to a website that would make her merchandise at no upfront cost. She also sought feedback from film teacher Eric Taggart, the school's campus ministry director, Milly Beltran, and campus minister Nick Shaheen.

See the Good has expanded its apparel line from sweaters to include sweatpants, beanies and bracelets, all bearing uplifting messages. Farres also has supported Bujalil’s sticker line.

Bujalil, a native of Mexico, said that her mother’s work in an immigration law office opened her eyes. She spoke to one of the lawyers about the challenges immigrants face in establishing citizenship. She’s also a digital-production student. “I’ve always loved art, and I had seen this cause,” Bujalil said. “I wanted to do something for that that I enjoy.”

Bujalil said that she hopes to expand her line’s reach into addressing human trafficking issues. She said she will likely continue that into college, where she will likely study international relations and political science.

Dutkowski said that they plan to continue the business once they get into college. They even plan to expand. Ali Ghandour of Albani Corp. is helping StormMiami get into a perfume line, of which StormMiami gets half the profit. They also plan on doing a bikini line and boating apparel.

Farres’ business is a mix of profit and nonprofit. She is using some of the money to save up for her college and reinvest in the company. But proceeds from See the Good purple sweaters also go to Alzheimer’s disease research in honor of her grandmother. See the Good also has funded about 20 care packages for military members who rarely get any mail. Her group has also packed lunches for about 30 front-line workers in the COVID-19 fight.

Farres wants to study film and business in college. She wants to continue See the Good’s work.

“Because we encourage students to find their own niche and seek out ways to be better people, we nourish within them to do things that will be long-lasting,” said campus ministry's Beltran.

Carolina Rubio - 09/22/2020 01:49 PM
ILS is a school unlike any other in Miami! They have raised the bar on their education and their teachers go above and beyond to make sure they succeed. The environment is relaxed and welcoming, much less socially and academically stressful than other catholic private schools. Yet their students get accepted at top notch and ivy universities as much or more than their peer schools. The steam program with focus in medicine that teaches at Mercy Hospital is incredible. The children love their school passionately and it shows! Their reputation is simply “everyone is happy there”.