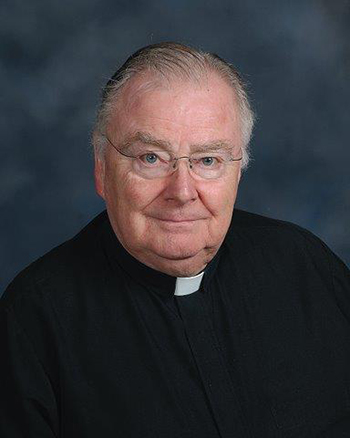 “Many of them actually knew that he was sick, knew when he went on life support. I mean they have been communicating with me,” said Denise Aloma, principal of the Fort Lauderdale school where Father Fenger taught theology from 1983 to 2002.

The announcements of his illness and death were posted on the Facebook page of St. Andrew Church in Coral Springs, where the priest had helped since his retirement from active ministry in 2011.

Although he was never officially assigned at St. Andrew, “he helped for many years with daily Masses and confessions, especially for the school students, religious education students and penance services,” said Msgr. Michael Souckar, St. Andrew’s pastor. “Although retired, I think he was one of the busiest priests I know, helping in so many parishes in northern Broward County.”

He described Father Fenger as “ever the teacher” who was never at a loss for words and enjoyed intellectual challenges. “He always encouraged and supported his students in their academic and professional pursuits, and this led to some longtime friendships,” Msgr. Souckar said.

In its Facebook tribute, St. Thomas Aquinas High School recalled how Father Fenger “remained a steadfast figure at Encounters, sunrise Masses, Ring Day ceremonies, and theology classes” from the first day he stepped on campus until he left in 2002. “His unique style of teaching engaged his students in the everyday application of scripture to their daily lives. His cheerful ‘hello’ in the hallways and his humorous anecdotes distinguished his presence on campus,” the tribute continued. 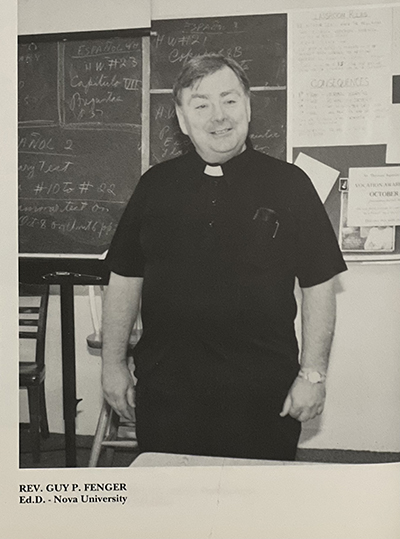 Those who commented on St. Andrew’s Facebook post recalled a priest who sprinkled his homilies with personal anecdotes and maxims from his mother, and possessed great knowledge of liturgy and Scripture.

Tom Fabbri recalled how Father Fenger had officiated at his wedding 10 years ago. He called the priest “a true gentlemen who had a wealth of knowledge. Always enjoyed our many conversations.”

Nancy Heise wrote: “In his sermons he would often mention things his mother told him. I often think of these little sayings. Here are some I remember: 1) Inch by inch it’s a cinch. 2) Take the scar and turn it into a star. 3) You can move mountains if everyone shows up at the base with a shovel...”

The sayings “always proved to be great advice for all sorts of ordinary life situations,” Heise wrote.

Rosemarie Gallo Neumann said she was impressed by his homilies. “You always read the Gospel according to Fr. Guy by bringing a personal story into the lesson which made it more interesting...”

Father Guy Phillip Fenger was born Nov. 5, 1941 in Buffalo, New York. He attended the University of Buffalo and Plattsburgh State, also in Buffalo, then obtained a bachelor’s degree in philosophy from Wadhams Hall in Ogdensburg. He graduated from Christ the King Seminary in East Aurora, New York, with a master’s in divinity and was ordained for the Diocese of Ogdensburg, New York, on April 30, 1977.

In the Ogdensburg Diocese he taught high school English, religion and social studies, and served as an associate in several parishes before obtaining permission to move to the Archdiocese of Miami in 1983. He began teaching and serving as chaplain at St. Thomas Aquinas a few months later while residing at Our Lady Queen of Heaven Parish in North Lauderdale.

He incardinated — became a priest of — the Archdiocese of Miami in January 1987. In 1990, he moved his residence to All Saints in Sunrise, moving again to St. Boniface, Pembroke Pines, in 2004. He remained at St. Boniface until retiring from fulltime ministry in March 2011.

Father Fenger was appointed vocations director for Broward County schools in 1986 and served as chaplain to the Knights of Columbus Council 3080 in Fort Lauderdale from 1984 to 1989.

Funeral services will take place next Tuesday, Oct. 19, at St. Andrew, 9950 N.W. 29 St., Coral Springs. A viewing will begin at 9 a.m. followed immediately by a funeral Mass at 11 a.m. and burial at Our Lady Queen of Heaven in North Lauderdale.

He is survived by three brothers, other relatives and many friends.

Roger Goodwill - 10/19/2021 11:54 PM
I met Father Fenger when I was assigned to Saint Andrews for my pastoral year as a seminarian. He was full of knowledge, life and was very approachable and was always there to listen. Father Fenger and I had many conversations after Mass or in the sacristy before Mass but it was always a pleasure speaking to him as his try to make Gospel and real life situations connect. I am sure his mom is happy to see him now. R.I.P padre.

Cheryl - 10/15/2021 01:09 AM
I loved his 7 pm mass at All Saints. There was no music, no singing, funny but to the point homilies, and it was nice to see him. It wasn't until A.S. installed that awful choir & music that kept interrupting him, which made hi leave that church. I only saw him during the last few years at A.S. for confession, and I knew he wouldn't be doing that for much longer.

Fr. Reardon - 10/14/2021 11:48 AM
Fr. Guy was a man who loved life, education, church - all of God's children regardless of creed or no creed at all. He had great devotion to Mary, Mother of God and loved and served the Lord God most of all. He truly loved God's gift of priesthood to him. May some young man fill Fr. Guy's shoes in Ordained Ministry. He never met a stranger. He loved educating and was proud of having earned a Doctoral degree in Education later in life. He taught from secondary through graduate levels. He did have a gift of "knowing everybody in town!" He had taught many families through generations and served so many folks in so many parishes that it did seem like "everybody in town knew him." He was very kind to the elderly and infirm, to the young who he pushed to get a good education and to his fellow clergy. Among his greatest gifts was his ability to laugh at his own foibles. He had a hearty laugh. When he said he never wanted to be long-term in a nursing home, I remarked that to be a good thing as he was not a good patient. I suggested that even Mother Teresa would have thrown him out and Guy found that to be hilarious. He received the blessing for which he asked - he bypassed being in long-term care and went before God where we trust he was welcomed immediately. He was home. Missed here already. P.S.: God now regrets gifting Guy with being loquacious! Fr. Bud Reardon - friend

Mike Lemm - 10/14/2021 06:28 AM
Fr. Guy was the best. A friend of mine that I new from the times I worked at Barry University. He cared so much about his students, the university and the ones he loved and served. He will always be remembered for all his great work and words. I will sure miss our conversations. Love ya Padre. Now you are home with the Lord.

Dennis Creamer - 10/13/2021 08:32 PM
Father Guy, was my professor at Barry University, my parish priest at All Saints, but most of all he was a mentor, counselor, and a Friend that I greatly respect. My God Bless you, and keep you. I will truly miss you. Thank you for all you did for me and my family. ðâ¤ï¸ð

Msgr Terence Hogan - 10/13/2021 06:57 PM
We will always be grateful for the loving ministry of Fr Guy at the parish of Mary, Help of Christians in Parkland. His wit and wisdom be greatly missed. May he rest in the peace of Christ the High Priest.