They came 'to pray for Cuba' 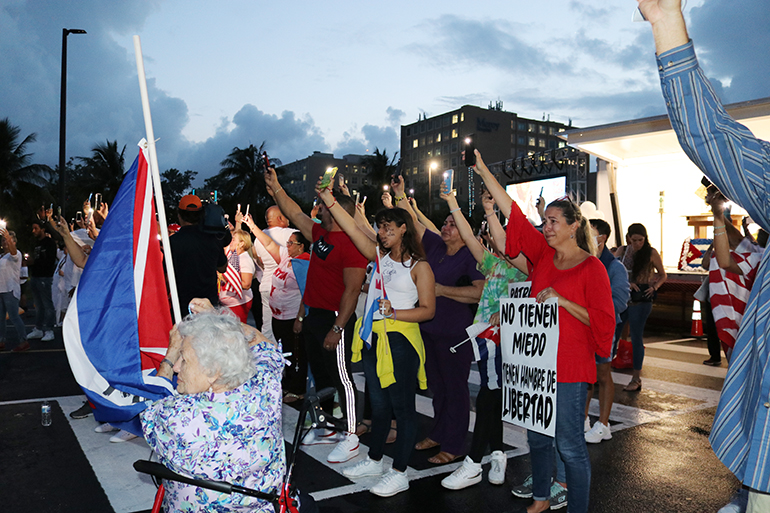 Dozens of Cubans living in the diaspora, who gathered at the National Shrine of Our Lady of Charity in Miami July 14, 2021, to pray for their homeland, raise their cellphones, with their flashlights on, while facing across Biscayne Bay toward the island. 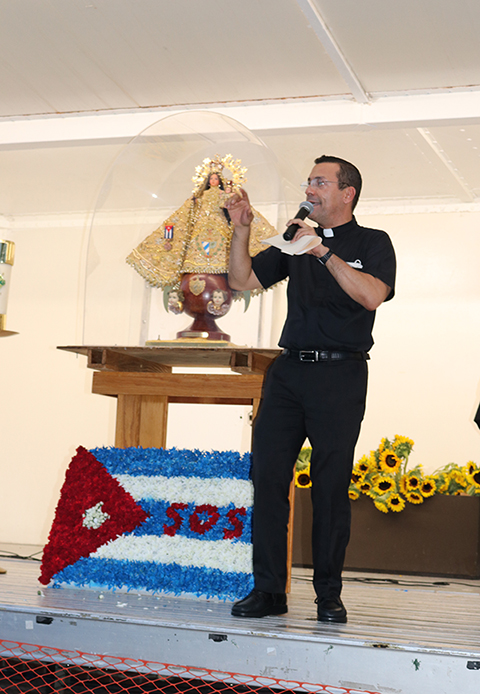 Father Jean Gonzalez Romero, a priest from Guantanamo, Cuba, who organized the July 14, 2021 vigil at the National Shrine of Our Lady of Charity, said “today we continue a living rosary facing these waters, the only part of Biscayne Bay uninterrupted by anything. These waters unite with the waters of Cuba. That’s why, with our hearts here, with our hearts there, and our prayers from here.”

MIAMI | “I came to pray for Cuba,” said Luz Urgell, moments before the start of a “great night of prayer for Cuba’s freedom,” a vigil organized by the National Shrine of Our Lady of Charity.

The vigil took place in front of the “malecón” or sea wall at the shrine the evening of July 14, 2021, a few days after widespread, unprecedented protests took place in cities throughout the island.

Urgell went with her husband, Jorge, and their two children, all dressed in T-shirts with the logo of the prayer night. The T-shirts, Liz said, “are the only way we can support what is happening right now in Cuba.”

The unexpected and massive protests against the Cuban government took place July 11 in different parts of the island. Internet connectivity helped Cubans and the world see what was happening. The regime responded with arrests, beatings and repression of the young protesters, who denounced their mistreatment and the government’s threats, also on social media, posting them for the world to see. Cuban authorities admitted one person was killed by government forces. Hundreds have reportedly been arrested and dozens summarily tried and convicted. The Cuban government also shut down the internet for a few days after July 11.

The fact that the people went out and protested “yes, it’s something good, they woke up. What motivates me the most, what gives me the most hope, is that they’re not asking for a plate of food. Their shouts are for freedom,” she added.

Her husband, Jorge, said, “I don’t know how far this will go, what’s happening now, but at least it’s a start. We are not going back, because regular Cubans [that] Sunday tasted freedom. They tasted saying freedom out loud, they tasted saying out loud that they weren’t in agreement with what is happening in Cuba, and when you taste freedom, there’s no going back.”

“It’s a beginning,” he continued. “We’re hopeful that the Cuban people will be free, that they will stop suffering and that communism will disappear; that’s the worst thing that has happened to Cuba in 62 years, communism’s arrival,” added Jorge, who lived 27 years in Guantanamo.

“I know what Cubans are suffering because I suffered it,” he added. 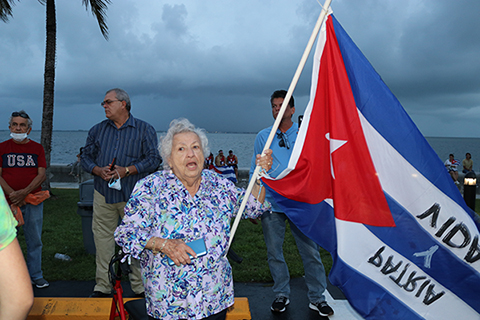 Mary Rios, 91, brought her Cuban flag to the night of prayer hosted by the National Shrine of Our Lady of Charity July 14, 2021. 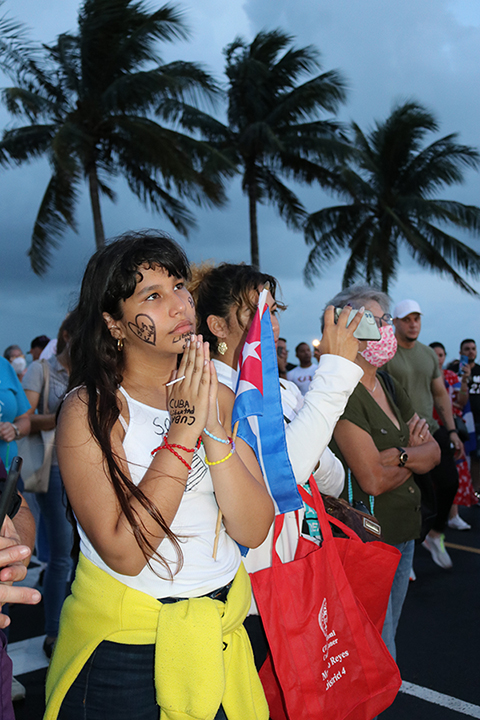 Yaymarilis Paz prays for relatives still in Cuba during the night of prayer hosted by the National Shrine of Our Lady of Charity July 14, 2021.

Around 100 faithful attended the prayer vigil.

“We came to honor and pray for those who are sacrificing themselves in our country, to give them support and encouragement,” said Elaine Reyes, a member of St. Joseph Parish in Miami Beach. She arrived in a bus with another 25 people, all members of the Horizontes de Cristiandad (Christian Horizons) ministry in the parish.

“I come to ask the Virgin for calm, for clear thinking, and for her to cover the Cuban people with her mantle,” said Eduardo Antonio, a well-known Cuban singer and songwriter.

“I think if the Latin American countries come together and demonstrate on the streets like we’re doing, then Congress, the United Nations, or whoever will realize what is happening and take appropriate measures,” Antonio said. “I also think that if we offend people, we’re not going to achieve anything. This is not the time to offend and curse.”

He also spoke about the song “Patria y Vida” (Homeland and Life), whose lyrics question the Cuban government and denounce the political and economic situation on the island. The title is a repudiation of the Cuban revolution’s slogan, “Patria o Muerte” (Homeland or Death). The song was written and recorded by a group of Cuban musicians.

“That song served its purpose, that song opened doors. It’s a good song, but now we have to take the next step and the next step is to be more united, all of us, not to loosen up, because if the Cuban people see us getting distracted, they will lose their strength,” Antonio said.

He noted that Cubans on the island are probably seeing the protests taking place in Miami and other parts of the world “but they don’t have the whole picture, some don’t have internet, so they’re only catching glimpses of what we can do.”

Antonio’s mother lives on the island and told him she’s worried that the government will decide to shut down travel to and from Cuba.

The Shrine of Our Lady of Charity, an icon for the Cuban people since the first exiles left Cuba due to the same dictatorship that many on the island are now protesting, opened its doors for prayer after the July 11 events. Nine days of 7 p.m. rosaries and prayer vigils began July 13 with a Mass celebrated by Archbishop Thomas Wenski.

At the start of the July 14 prayer vigil, Father Fernando Heria, rector of the shrine, said “our intentions are all focused on our brothers and sisters in Cuba, focused on denouncing before the world all the atrocities happening in our homeland for the last 62 years. Enough is enough!”

Father Jean Gonzalez Romero, a Cuban priest from the Diocese of Guantanamo-Baracoa who organized the July 14 event, said “today we continue a living rosary facing these waters, the only part of Biscayne Bay uninterrupted by anything. These waters unite with the waters of Cuba. That’s why, with our hearts here, with our hearts there, and our prayers from here.”

“Our Lady of Charity, save Cuba, save your people, save your children, embrace with your mantle the people who suffer an unjust dictatorship,” Father Gonzalez said, moments before the faithful intoned the hymn “Virgen Mambisa,” by Rogelio Zelada.

Among the participants at the vigil were Rosa Maria Paya, whose father, Cuban opposition leader Oswaldo Paya, founded the Christian Liberation Movement on the island and died under mysterious circumstances in 2012. Rosa Maria placed a chain with 62 links at the feet of the image of Our Lady of Charity, one link for every year of the dictatorship.

Later, the songwriters of “Patria y Vida” arrived: the duo Gente de Zona and the rapper El Funky. They expressed their support for Cubans on the island and sang verses from their song.

“I came to ask the Virgin to help us liberate Cuba in the most peaceful way possible, and to help the Cubans there, who need it,” said Mercedes Santana.

She admitted that “those of us who are here don’t know what to do to help the Cubans there. The Virgin will help us, will guide us,” said Santana, who has lived in the U.S. for 27 years. She no longer has close relatives on the island but “all those people are my people, that’s my country and it’s suffering a lot. They are killing children and young people and those of us here don’t know what to do. I came to pray for the Virgin to help us.” 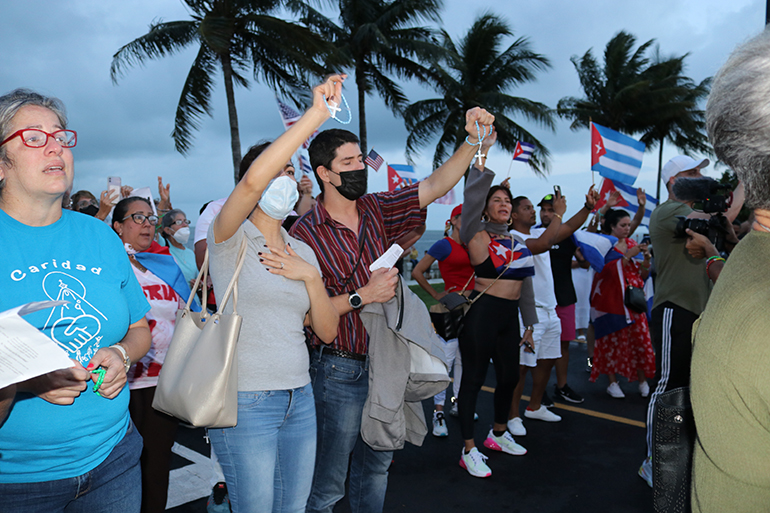 More than 100 Cuban exiles gathered at the National Shrine of Our Lady of Charity in Miami July 14, 2021, for a night of prayer for their homeland in response to the unprecedented protests that took place throughout the island July 11, 2021.