New Marian litanies reveal the heart of the Mother of God 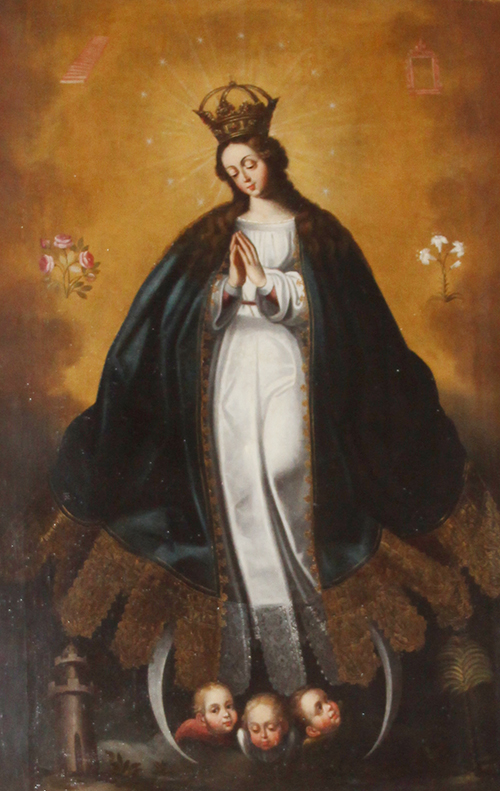 Image of Our Lady of the Immaculate Conception belonging to the Cuzco school of painting which flourished in Peru during the 16th, 17th and 18th centuries. This image is currently found in the Chapel of La Merced on the grounds of Corpus Christi Church in Miami.

A few days ago, I was reflecting with a person of great Marian devotion about the age that the Virgin Mary would have been when she experienced the death and resurrection of her son, Jesus. If she conceived him at 15 or 16 and we add to that the age of Christ, which was 33, she would have been less than 50 years old when she lived through Pentecost.

After that mention in the Cenacle, Mary of Nazareth is not heard from again in the New Testament. It was not until 1950 that the magisterium of the Church — through Pope Pius XII — pointed out to us not her age, but her earthly end. This was possible through the dogma of the Assumption of the Virgin Mary in body and soul into heaven.

Another part of the conversation revolved around the fact that this elevation should have taken place very soon, since God would have no reason to postpone the coronation reserved for her as Queen and Mother of all the creation that invokes her.

Therefore, it is natural for Marian litanies to have flowed since ancient times, as a plea, prayer or praise, and nothing more than the titles and acknowledgements with which the nascent Church recognized the greatness and predilection of God for his mother.

A little more than 2,000 years have passed, and the Church continues to add new titles and gratitude to the Virgin Mary. On this most recent occasion, it is done through Pope Francis who, through the Congregation for Divine Worship and the Discipline of the Sacraments, has asked the whole world to add three new litanies to further highlight the merciful and consoling characteristics of its highest patroness.

Thus, a letter signed by Cardinal Robert Sarah, prefect of said Vatican dicastery, and addressed to the presidents of the episcopal conferences of the whole world, establishes the incorporation of the formulas "Mother of mercy," "Mother of hope" and "Solace of migrants."

Although the Church already had 52 litanies, the current pontificate wanted to translate into new petitions what has been at the heart of Pope Francis' magisterium during these seven years.

The first, Mother of mercy, reflects the teachings of the Holy Father from the beginning, that "God never tires of forgiving, but we are the ones who tire of seeking his mercy.” For this reason, he builds that bridge to divine forgiveness which is the Virgin who, as a caring mother, first moved the heart of her son when she interceded for the bride and groom at the wedding at Cana.

In the case of the second, Mother of hope, Pope Bergoglio entrusts to Mary all the great tasks and projects that he has undertaken, some of which require a fierce trust that to hope is to believe in God's promises.

These include his insistent calls to a culture of encounter, to the living out of a Gospel of joy, to the protection of the environment and even to the very reform of the curia and other ecclesial structures, namely parishes, religious congregations, schools, and the media.

With the third — Solace of migrants — the planned modification has been completed. This litany is a sign of confidence in the intercession of the Queen of Heaven in the face of a growing problem and much suffering that has demanded the direct and continuous intervention of the pope — that is, the harsh reality of displacement and lack of opportunities that characterizes migration on a global scale.

The changes made by Pope Francis were not the only ones to modify the list of Marian Litanies of Loreto, a term that refers to the place where most of these would have been written, i.e. the House of Loreto (now a sanctuary in Italy). According to tradition, this was the place where Mary's dwelling was transferred, where she received the visit from Gabriel the Archangel.

In order to further emphasize this recognition, various popes incorporated new litanies. Thus, we have the case of Pope Pius V, who introduced the invocation "Help of Christians" in the 16th century. After the dogmatic definition of 1854, Pope Pius IX gave absolute character to the litanies "Mother undefiled" and "Queen conceived without original sin," although they had already appeared in the 18th century.

Some of those that were incorporated in the 20th century include, "Queen of peace" (Benedict XV), as well as "Mother of the Church" (Paul VI) and "Queen of families" (John Paul II).

The litanies to the Virgin Mary are added to other invocations that the Church has developed for the Blessed Sacrament, the saints, the Sacred Heart of Jesus, and St. Joseph, among other forms of praise and intercession, which are part of the liturgy and sacramentals.

It is very common for Christ in the Blessed Sacrament to be praised with litanies after the blessing with the monstrance. The saints are also invoked during the sacrament of Holy Orders in their three degrees (bishop, priest or deacon).

For many, it is usual to do this at the end of the prayer of the Holy Rosary, in order to complete the "compliments" that have been elevated to the Mother of God on each bead. However, the litanies do not have to be part of a ceremony or a rosary in order to be expressed.

Every Christian can manifest his love for God, the saints or Mary by enunciating them in a personal way, in order to better strengthen his or her filial relationship with the divine.